By ValleyPatriot on May 16, 2014Comments Off on Local Man’s Heartwarming Success Story Serves As Reminder That Autism Awareness Doesn’t End in April 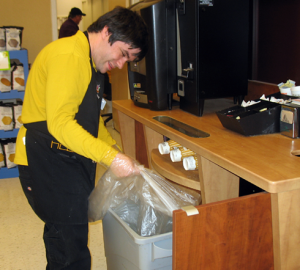 Matthew O’Beirne walks into work each day with a big smile on his face, not only because he loves his job at the North Reading Stop and Shop, but because he loves the independence it gives him.

O’Beirne, 24, of Methuen, has Pervasive Developmental Disorder, or PDD, a diagnosis that places him on the autism spectrum. He went to American Training last fall and was trained through the StarWorks program and placed at Stop and Shop in a job that allows him to move beyond that diagnosis, giving him freedom and responsibility that he might not otherwise experience.

“I like the independence,” O’Beirne said of the job. “They trust me enough to let me do my job the way I need to do it to get it done on time. I like that they trust me that way.”

He’s been on the job, his first, for six months. In that time he’s seen an increase from 12 hours per week to 15 hours spread over three days each week, as well as a steady increase in responsibilities.

“I feel like they’re trusting me with more responsibilities now,” O’Beirne said.

Among those responsibilities are porter duties like taking out the trash, mopping up spills, and cleaning counters, as well as bagging and cart collection duties. He said as new things are added, he adjusts accordingly.

“It’s kind of difficult when they throw me off my routine by adding something else,” he said, “But after about a week, I seem to get the hang of it again.”

O’Beirne said the job has been a positive experience.

“It’s been pretty good so far. I have a nice boss and get along well with a lot of my coworkers,” he said.

“When I see Matt come in, he’s always ready to work and happy to be here,” he said, adding that his positive attitude is something for others to emulate.

“I just try to brighten up people’s days by being very friendly to everybody,” O’Beirne said, emphasizing that he tries to set a good example for the newer employees.

Carol Smith, the StarWorks Career Coach who partnered O’Beirne with Stop and Shop, said that she carefully assesses each guest and employer’s abilities and needs to provide a strong and successful match.

“Matthew is conscientious about his job and is looking to grow from his experience. His employer has a great partnership with him and values him both as an employee and as a part of the Stop and Shop community. Matthew made a commitment to his job and embraces what he can and cannot do,” said Smith and StarWorks Program Director, Denise Michaud.

Smith said Stop and Shop has been wonderful in their partnership with American Training. “They care. They’re very endearing,” she said. Of Capistran, she added, “He sees potential and wants to utilize it. He’s just wonderful.” While O’Beirne is finding success in his part-time job at Stop and Shop, the avid animal lover keeps busy with his dog sitting and walking business, on Rover.com, and through volunteering at the Salem Animal Rescue League.

“Matthew looks beyond a job, and is an entrepreneur. He is extremely committed to animals and has set up his own web site, travels by train to metro Boston to fulfill obligations to pet sit…..always moving forward,” said Smith and Michaud.

Last year he rescued Gina, a now 1.5 year old Alaskan Klee Kai. Two cats, Amber, 5, and Pumpkin, 3, also share his home. Autism Awareness Month has come to a close, but O’Beirne’s story serves as a reminder that autism lasts throughout the year, and so should awareness. To learn more about autism go to autismspeaks.com. His story is just one of the many success stories throughout the community and through American Training’s programs.

StarWorks builds confidence and skills leading to employment for people of all levels of abilities and challenges. They assist more than 100 people each year in their job search by assessing current abilities, developing marketable skills, and providing vocational and personal counseling.

To find out more about American Training and StarWorks, please go to www.AmericanTrainingInc.com.