By Tom Duggan on March 2, 2018Comments Off on Local Police Chiefs on Opioids, Violence, & Angels Program

Much has been made of the Gloucester’s Angel Program; what do each of you think about that?

(The Gloucester Police Department has decided to grant amnesty to any addict who comes to the station and turns in their drugs in exchange for going into a supervised drug rehabilitation program.)

CHIEF GRAY: “I’ve spoken to the District Attorney’s Office on this and quite frankly I don’t think it was done right because we don’t have the authority (as police officers) to grant immunity when someone commits a crime. The program that they have is well intended, they had good intentions, but it’s not by the law and therefore I don’t think that you can do it for the sake of doing it. You have to have the D.A.’s office involved and on board with you before you just venture out like that.

CHIEF DENARO: I work very closely with D.A. Jon Blodgett and one of the things we discussed is that we are not allowed to make deals for the D.A.’s office. They are the prosecutory arm of this whole thing. We make the arrests but we can’t just arbitrarily tell people ‘we aren’t going to charge you for this offense’. We can’t do that. I was never really involved in the Angel’s program, which is why we started our own program; we have a sergeant, two officers and someone from NFI, a counselor who go out and try to get people into the programs. We don’t have a ton of people who come into the station and knock on our door and say I need help. Usually when somebody gets caught, or they overdose, or they’re involved in an arrest where you have an opportunity to circumvent that path that they are on and hopefully we can help them get straightened out. 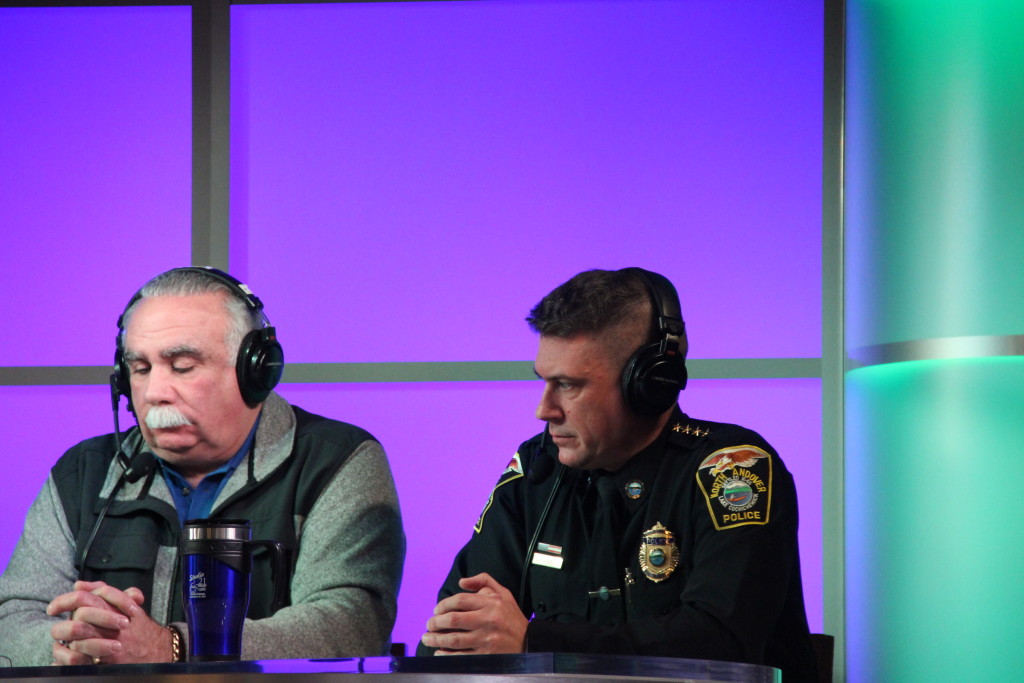 CHIEF GRAY: Getting back to D.A. Blodgett for a minute. He actually has a program in place, a diversionary program for drug addicts. SO, he’s actually taken a lot of positive steps to make things work for us. I don’t have a program in the town of North Andover, so we use the D.A.’s office. He’s doing a fantastic job.

Duggan asked the chiefs if they see any spillover crimes being so close to Lawrence and if the increase in opioid use in the Valley has spiked their numbers in other violent crimes like domestic violence or armed robberies.

CHIEF DENARO: My answer is entirely different. Ours are mostly gang related violence as the result of drugs. Our gangs are interchangeable with Lawrence. They freely go back and forth between communities. You are now even starting to see them going to Amesbury a little bit, but predominantly when it gets hot in Lawrence they come to Haverhill. When it’s hot in Haverhill they go to Lawrence. A lot of the shootings that we’ve had are over drug disputes or people who didn’t pay, or drug shipments that were misdirected and that type of thing. When gangs disrespect each other it leads to significant problems and a lot of them are drug related. So, our violence is significant as the result of gangs and drugs.”

DUGGAN: Are you seeing that the gangs are becoming more violent and more prevalent on the streets of Haverhill like they are in Lawrence? Are you seeing major gangs?

CHIEF DENARO: I think we are; I think it’s safe to say that it seems that the gang members we are dealing with today, as opposed to even a decade or 15 years ago, there seems to be less regard for human life. They don’t seem to value life. It’s nothing for them to take a gun and shoot into somebody’s house. The scary part is that there’s no value for human life and that’s very frightening for us. 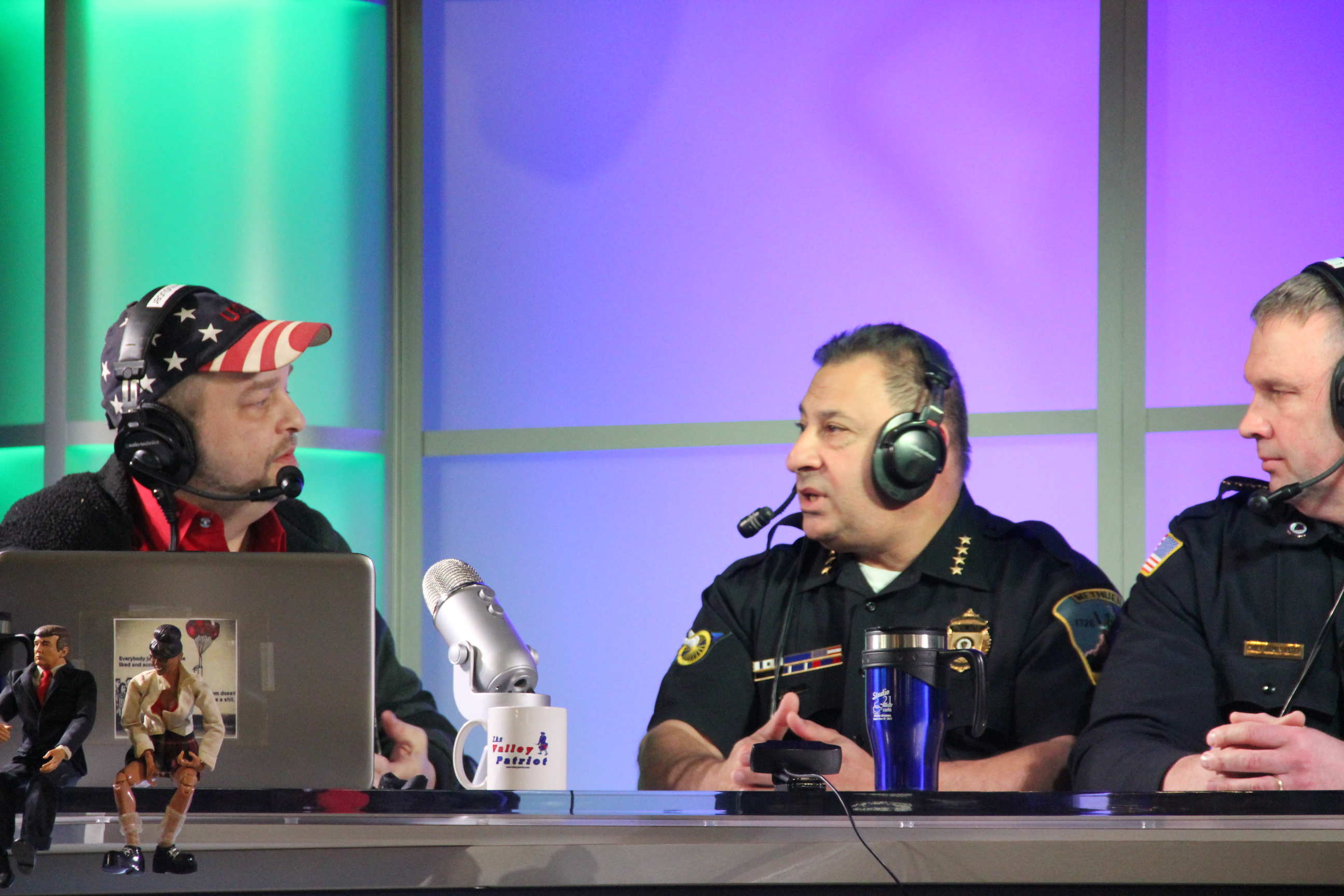 CHIEF RITER: We see some on the traffic stops with motor vehicle issues that come through the town. What we do see is more service calls for the family. Going back to the other topic for a minute on the mandatory hold (for Narcan recipients), I think it’s good for these families. What we see is families get someone home and try to handle the problem in the home setting and when that doesn’t work, they need a next step to get that person [help]. The hold gets them out of the house and gives the family a break also. A lot of times when we are talking to the families they say they don’t’ know where to turn next. They’ve tried certain programs, they’ve tried different things and they just need someone to give them help also.

Duggan asked each chief if they could educate the public with one thing people aren’t talking about what would it be.

CHIEF SOLOMON: I actually talked to a couple of real estate agents who said they are have a problem with people coming through and going through people’s medicine cabinets at home showings. As people are going through the homes they are going through medicine cabinets. So not only should you not have opioids in your medicine cabinet but you should have it locked up somewhere. I always say to people, you have to have situational awareness with your family. People always say after, ‘Oh, I knew something was wrong with my Lisa or Johnny’. So, I say to parents ‘as soon as you see a behavioral change, a sudden change in friends, any change to their personal situation take note and be aware of it. And then you take it to the next step of exploring options and don’t feel bad about going through their room when they’re not at home.

CHIEF RITER: “If you know you have a problem in your family, reach out. Understand that there’s a lot of people going through this problem. Make sure you reach out to a police professional, or someone who might be able to help. Get some early information.

CHIEF DENARO: One of the things I have seen personally is that we’ve gone out and reached out to families of young people we knew were addicted. The families pushed us away. They want to handle it themselves, they want it to be quiet. My advice to these people who … you know in one particular case the individual was dead two weeks later and the mom was crying at the wake saying ‘I should have done something, I should have listened. So the best advice I can give is that what we see with these addiction problems, especially with opioids is that three or four times going to rehab is not unusual. Nobody is getting clean once, kicking it and going on with their life. So, you have to understand that there are going to be some failures involved, but you have to reach out and you have to reach out early. Get them in these programs. Get them on the radar screen so that they have a fighting chance to beat this. If you don’t, if you think you can handle it yourself, you absolutely cannot handle a family intervention and do it yourself. It’s not going to work.

CHIEF GRAY: Don’t judge. Don’t allow a stigma to influence your judgment as far as not going for help. We don’t use the term “junkies” any more. They are addicts. We do that to try and take away the stigma of having that battle.

DUGGAN: “So, I shouldn’t use junkie anymore then?”

CHIEF GRAY: “Uh, no. That’s one of the reasons the stats on this are under-reported. They are afraid to call for NARCAN, they are afraid to call and say someone overdosed. I’ve talked to a lot of the officers who go on these calls and they say that ‘the person just dropped.’ If it’s heroin or fentanyl let us know. Let us take care of it. Don’t worry about the stigma that you think is going to go with it.