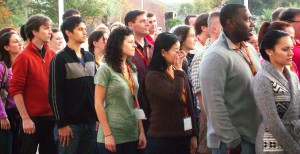 Two of the Valley Patriot editors were invited by Staff Sergeant Natasha Young of the Lawrence Marine Recruiting Station to attend this educational event and chronicle how Massachusetts teachers and public school administrators dealt with the rigors of basic training.

According to 2nd Lieutenant Melanie M. Salinas, Deputy Public Affairs Officer for the United States Marines; “The Marine Corps Enlisted Educators Workshop program started in the late 1970s and, while we have no exact number, a conservative estimate of more than 10,000 educators, counselors, coaches and civic leaders have had the opportunity to see how we make Marines at Parris Island.

As a valuable tool within the High School/Community College Program at each Recruiting Station, the workshop was renamed the Educators Workshop and offered teachers, coaches, and school counselors as the main focus of effort as attendees. The workshop program expanded to five days in length and relies on commercial aircraft when it is necessary and pays lodging and meal expenses for attendees. Some Recruiting Stations are located close to the Recruit Training Depots and rely on buses for transportation of the educators.

Each of the 48 Recruiting Stations around the country send approximately 40 educators to their respective Recruit Training Depot each year.

In general, it is the Recruiting Station Marketing and Public Affairs Marine who is in charge of each program until the educators arrive at the Recruit Training Depot, and then the Operations Marines provide the activities and conduct the workshop for the visitors.