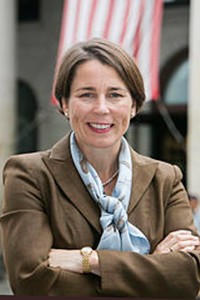 Massachusetts Attorney General Maura Healy denied reports that she is “banning guns” or  overstepping her authority saying she is neither creating a new law or taking away 2nd amendment rights.

Healey appeared on 980WCAP’s morning show with Teddy Panos and Leslie Boder to talk about attending her first national convention but the talk quickly turned to guns and healey’s announcement last week that she will enforce a previous ban on “copycat assault weapons.”

“I’m going to be real clear with folks,” Healey said.

“What I did last week was, our office sent out a notice reminding people of our existing state law of our assault weapons ban, and reminding them that copycat versions of those assault weapons are also prohibited for sale under Massachusetts state law.”

“Over the years, those weapons have still been sold. We wanted to be clear with gun dealers that they need to comply with the law and that those weapons are actually not for sale in Massachusetts. This is not a ban on all semi-automatic weapons. I’m not saying that we are going to take guns away from people. In fact, people who have purchased these guns over the years in good faith, believing they were able to purchase them, can keep them and they can resell them if they wish.”

“But, on a forward going basis we want to be clear that the law in fact, prohibits the sale of these kinds of guns.”

“Why did our office do it now? We did it because, I think at this point in our country we need to take a hard look at what we need to do to reduce  gun violence and promote gun safety. There are a lot of things that we can do that we should be doing. Gun owners are a key part of this, and teaching responsible gun safety is part of this, working on mental health issues, working to keep guns out of the hands of people who are dangerous to themselves, or others, is part of this and cutting down on the illegal trafficking of guns, particularly from other states.”

“More than half of the guns that show up in Massachusetts used in crimes, comes from other states.”

Healey said that the legislature makes the laws and she has in no way changed the law only reminding people that she will enforce.

“Ten thousand of these weapons were sold in Massachusetts last year alone. After Orlando, sales of these particular style weapons skyrocketed 450%, in just the week after. I realize that the majority of shootings in this country  are at the hands of handguns. But, I will say that this particular class of weapons was designed to be able to shoot as many rounds as possible, in as little time as possible, and to kill as many people as possible, in as short amount of time as possible. That was the design and the intended use by the military. It has become commercialized to the civilian public, and it’s just not the kind of weapon that was ever intended for civilian hands.”

“Has it been marketed that way? Absolutely.  Do a lot of people purchase these? Absolutely. But, we just have to get back to a place where the law is being enforced, and that’s what this effort is about here in Massachusetts.”

“When you look at Arora, San Bernardino, or Baton Rouge where officers were targeted …and Dallas . This is the type of weapon that was used. They are the weapons of choice for mass shootings. That’s what this is about. It’s about reminding people and making clear that this is a law in Massachusetts and the sale of these are banned.”

Host Teddy Panos asked the attorney General why there was so much emphasis is on this while existing gun laws with mandatory sentencing  is not being enforced. He also asked if she would support a law making it mandatory that gun charges cannot be plead down to avoid jail time.

“I will tell you, I know throughout the state there are so many prosecutions and investigations of gun trafficking, and prosecutions of individuals who have guns in their possession illegally. That’s important. That needs to continue. We need to do everything we can to crack down on illegal guns. My office is committed to that. I know DA’s, and police chiefs, and police departments are committed to that. Part of the problem is that there are so many guns coming into, and through our borders, that it’s always a struggle to keep up. But, you are absolutely right, we need to continue to focus on investigating, prosecuting, and holding accountable those who have guns illegally. But, at the same time I think it’s also worth looking at the bigger picture of what is happening here.”

USING THE CDC TO RESTRICT GUNS,  A PUBLIC HEALTH ISSUE?

“Weeks ago, I joined with other state’s Attorney’s General, asking congress to let  the Centers of Disease Control (CDC) to actually study gun violence and trauma. Why? Because CDC often studies consumer products, and comes up with ways to design better safety, and intervention, and preventive strategies. I want the same for guns, you know. I want to make sure that we are learning from experiences, and doing everything we can to reduce the gun violence; whether it’s in domestic violence situations, whether it’s in a suicide situation, whether it’s young people who have access to guns and use those as a means of sorting through their issues instead of other means. “