By Tom Duggan on January 9, 2013Comments Off on Mark Mezzina To Run for School Committee in the Spring 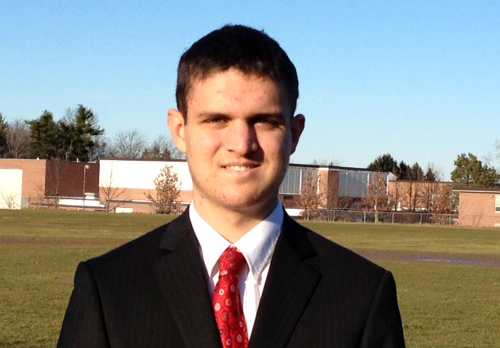 19 year old Mark Mezzina says he wants to serve on the North Andover School Committee. The Johnson Road resident says that he is against the new grading system in North Andover which replaces the letter grade report card system (A through F) with a number grade system. Parents spoke at a recent forum on the issue saying that students are getting the same marks for getting different number of questions wrong on the same test.

“What we need to do is make the curriculum tougher and the evaluation standards tougher instead of going a completely different direction,” Mezzina said.

Mezzina also took the school system to task for holding a public meeting on the issue after they passed the grade change. “They should have had the open forum meeting before the changes were approved. I am sure there were many parents who would have liked to give input on that.”

Mezzina says he is running to bring transparency and openness to the school committee. “My Big thing is I want to do more to bring open and transparent government. I will post every vote I take on-line with a full explanation of my vote. That way, people don’t have to guess what I did or why I did it.”

Mezzina was attending the University of South Carolina and says he took the semester off to come back home and run for school committee. He has three siblings in the North Andover Public Schools and has lived in North Andover his entire life.

“I’ve been interested in politics for as long as I remember,” he says. “I started getting active in the last few years and a lot of people encouraged me to do this.”

Mezzina campaigned for Karin Rhoton for State Representative and says he is a conservative who looks forward to working with local legislators like Jim Lyons to bring more local aid to the North Andover schools. “North Andover gets less local aid than many of the surrounding towns, and I’d like to change that.”

He says he is not running to replace the current School Committeeman Christine Allen, who has yet to declare herself a candidate for reelection. “I am running no matter who is in this race, I am doing this because I want to be involved and make a difference. If Chris Allen runs I welcome the competition.”