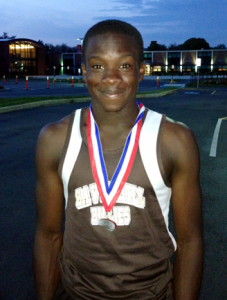 Alex Mayhew is worth cheering about.

If you are not familiar with Alex Mayhew, it may be because you blinked.

At 5-7, 150 pounds he is not particularly imposing.  But it’s not his slight build that may have caused you to miss him.  It’s his speed.

And after three solid – yet sometime roller coaster – years at Haverhill High School, he apparently saved his best for last.  Mayhew has enjoyed not only a successful senior year, but also a historic one.

Mayhew may or may not be the best sprinter in Haverhill High history.  But you’d be hard pressed to find a faster cheerleader.  That’s right, the young man who can run the length of a football field in about 10 seconds is adroit at doing a round-off handspring, double back flip – his favorite move.

A member of the Hillies cheerleading squad as a sophomore, Mayhew is a competitive cheerleader.

How did he become involved in cheerleading?

“I loved to do flips and tumble in my backyard,” said Mayhew, who competes for East Celebrity Elite in Tewksbury and with an all-star cheerleading program.  “One day someone saw me doing flips and told me that I was very good and that I should sign up for cheerleading.  So I did.”

“And I loved it right away,” Mayhew said.

He said that cheerleading is great conditioning, very competitive, and helps him stay in shape for track.  “We work hard,” Mayhew said.

As far as what others think of him cheerleading, Mayhew said that kids made fun of him on a daily basis, but that it doesn’t bother him.

“You have to do what you like to do.  That’s important,” Mayhew said.

Mayhew has come along way since winning the 100 meters and long jump in the annual city-wide middle school meet as an eighth-grader.  He came out for track during the spring of his freshman year where he made an immediate impact, according to Maguire.  As a sophomore he captured second place and eighth in the 200 meters in the MVC meet and E Mass Division 1 meet, respectively.

He appeared poised for stardom.  But Mayhew missed the indoor season of his junior year because he was academically ineligible.  Mayhew said he is a better student today than he was a year ago.

“He did enjoy some success up to this point, but there was always a feeling he could make it to a higher level.  He needed more focus and attention to what he was doing,” said Maguire.

Mission accomplished, as Mayhew has renewed his focus and energies on getting the most of his abilities.

On June 1, running in the finals of the 200 meters at the All-State Championship in Westfield, Mass., Mayhew clocked 21.71 to earn second place and break Alsup’s mark of 21.8 – a record he had been eyeing since his freshman year.

“He is a great athlete with tremendous explosiveness.  But his biggest strength is his top speed. Once he gets going, he is very exciting to watch,” Maguire said.

As for the future, Mayhew will probably attend Northern Essex Community College next fall where he will continue to work on his grades.

“Alex is a very respectful and humble kid.  As a coach you want to see your student athletes develop their potential and reach their highest goals, but you also want to see them mature and grow as individuals,” Maguire said.  “This year I’ve seen Alex grow and take responsibility.  It’s been the key to his success.”

Will he continue running track and competing in cheerleading in the future?

One Response to "Mayhew makes history with all-time best"