Despite Proof That Photos of Garbage and Needles Were Not from TMF, Rivera Doubles Down 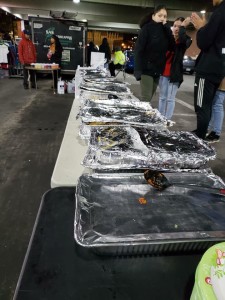 For the past 6 months a volunteer group of teens and young people from Lawrence called “The Movement Family” (TMF) have been serving a family style dinner to the homeless at the Buckley Garage on Common Street.

The group, run by 26-year-old Michael Gorman, gets food donations from local restaurants, eateries, home cooked food from volunteer residents, serves a family style dinner, and then has his group clean the bus terminal when the dinner is over, leaving it far cleaner than when they arrived.

In the six months that TMF  has been serving family dinners to the homeless they have served meals to hundreds of homeless people, while also offering them services to help them get out of their situation. 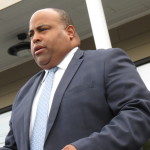 On an average night there are a dozen or more people who sleep at the Buckley bus terminal. The Daybreak homeless shelter on Winter Street is at capacity every night filling 55 beds for the homeless. Daybreak is the only homeless shelter in the city. There are an estimated 200-250 homeless people in Lawrence.

The mayor’s move against the homeless came after a worker at the Merrimack Valley Regional Transit Authority (MVRTA) posted photos of garbage and dirty heroin needles at the Buckley Garage on his Facebook page.

He did so to protest the conditions he had to work in every day.

But, someone showed those photos to Lawrence Mayor Dan Rivera, claiming that they were from the Wednesday night TMF family dinner for the homeless in order to get him to shut down the volunteer group.

At first, the Mayor believed the story and ordered police to shut down TMF, a group of mainly Hispanic at-risk teenagers trying to help the community.

The Valley Patriot sent the mayor proof that the photos of garbage and dirty needles posted on Facebook were actually taken this Monday morning – and not the result of the Wednesday night TMF dinners for the homeless. But,  instead of reversing his decision – Rivera ordered police to throw the homeless out of the garage  completely and reaffirmed his order to stop TMF from feeding the homeless there one night a week.

Police are expected to carry out that order at 9pm Tuesday night (tonight). 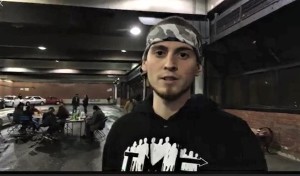 “I’m disappointed that we have been doing this Bus station since April and not once has the Mayor come to see the foundation that we built there,” said TMF founder Michael Gorman of North Andover.

“It’s more than just a dinner. We had Tewksbury Detox coming weekly to get individuals beds. We had a methadone clinic table, donations table, Narcan table, prayer table etc.. This wasn’t just a pick up your food and see you next week. We were building a family environment and displaying how important it is to never give up, and to keep the hope alive.”

Gorman said that most TMF members come from tough situations at home and having them experience giving back to their community was invaluable to at risk kids in Lawrence.

“This was their escape. They were understanding love, guidance, and acceptance.”

Asked how he felt after getting the news that the mayor was shutting down TMF family dinner Wednesday nights.

“I guess disappointed would be the best word.”

He added, “Its not your city Mayor Rivera. Its our city. What happened to working together?”

Several other homeless organizations have said that Lawrence Mayor Dan Rivera has been hostile to their efforts to help the homeless and has blocked several organizations from getting more transitional housing for the homeless to help get them back on their feet. He has also blocked Daybreak’s efforts to get a new building somewhere in the city.

The Valley Patriot gave Lawrence Mayor Rivera a chance to comment on this story but he declined to answer prior to publication.

Last year, Mayor Rivera was heralded for closing down “tent city” under the central bridge where homeless people had created a criminal enterprise of selling drugs, facilitating prostitution, and harboring fugitives from the law.

At the time, Rivera told the Valley Patriot that he had no interest in helping the homeless in Lawrence because “most of them are not from the city” adding that he had limited resources to help Lawrence residents and that he was not going to take needed resources away from them to help homeless people from other communities.

MORE STORIES ON THE HOMELESS IN LAWRENCE

Lawrence is considered one of the poorest communities in New England.

Mayor Orders Police to Throw Homeless Out of Buckley Garage, Shuts Down Group That Fed and Serviced the Homeless added by Tom Duggan on November 27, 2018
View all posts by Tom Duggan →

11 Responses to "Mayor Orders Police to Throw Homeless Out of Buckley Garage, Shuts Down Group That Fed and Serviced the Homeless"