By Tom Duggan on August 5, 2015Comments Off on MCAD to Hear Corruption and Whistle-blower Case Against Salisbury Town Manager Neil Harrington 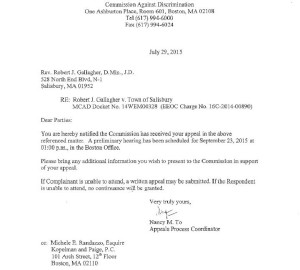 The Massachusetts Commission Against Discrimination (MCAD) has granted a hearing to former members of the Salisbury Board of Health, after Town Manager Harrington fired the entire board for trying to expose corruption, conflicts of interest, fraud, “apparent government waste” and retaliation against them as “whistleblowers”.

The suit was filed by the former board member, Reverend Robert Gallagher who told The Valley Patriot that the level of corruption in Salisbury, is so deep and accepted as “business as usual” that it is impossible for local people to do much about it without the help of state officials.

The suit stems from several actions by the Salisbury Board of Health which former members say angered Town Manager Neil Harrington, who threatened to fire board members for not going along with the status-quo, then carrying out that threat by retaliating against board members who complained to state officials, asking for an investigation.

WASTE, FRAUD, AND A TOWN COVER-UP 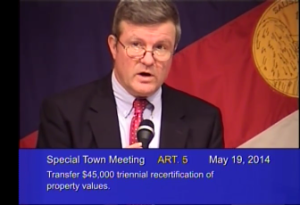 Among the many instances of waste and abuse of public dollars included the Board of Health complaining to the Attorney General’s Office, in an attempt to expose the waste of state taxpayers money.

The Board was seeking to expose the town using state tax dollars to pay  $450 per unit, per week, to house the homeless in flop houses which do not meet state health standards, putting the homeless at risk.

“As soon as the BOH started looking into the flop houses, the town manager landed on us like a ton of bricks, telling us to back off from enforcing the state sanitary code and threatening to fire the entire board for being too pro-active,” Reverend Bob Gallagher told The Valley Patriot. “Our goal was not to displace the homeless but to be certain that they have safe and clean quarters.”

Gallagher noted as one example of unsanitary and unsafe living conditions was how homeless families had to wash dishes in the tub because there were no kitchen sinks.

Gallagher also noted that these same flop houses dump families with school children onto the streets before the school year ends, once the seasonal weather comes. He says this interrupts their education and displaces them with nowhere to go.

The Board also complained of corruption by Town Manager Harrington when he purposely denied them access to the town attorney’s at Kopelman and Paige “to disclose concerns about Health and Safety Ethics, Government Waste and Fraud and to seek legal guidance re: conflicts, enforcement, sexual harassment, interpretation of state health codes, and extent of [The Board of Health’s] obligations.”

The Board also tried to expose an environment of sexual harassment being the standard for employees to endure in Salisbury. According to documents and video, Town Manager Harrington was present at a public workshop when one of his town employees made allegedly sexually harassing comments to female members of the Board of Health.

The Board also presented a wide variety of evidence of “cronyism and corruption ” against the Town Manager and the Board of Selectmen who have knowingly allowed intimidation, sexual harassment, and fraud of taxpayers dollars.

This isn’t the only instance of corruption and cover up by Salisbury Town Manager Neil Harrington. The Valley Patriot exposed a cover up in September of 2013 called “The $80 Million Lie” where the Town of Salisbury and in particular Neil Harrington covered up a fraud by the town to charge sewer rate payers for a fake sewer betterment.

Harrington refused to turn over public records upon request of The Valley Patriot in violation of MGL Ch. 66. the state’s public records law. The documents that were being sought were eventually turned over after the intervention of a state senator, and showed that Town Manager Harrington spent more than $100,000 in legal costs to recover $15,000 in sewer bills by GraceMarie and Joyce Tomaselli.

The MCAD hearing is a granted appeal, reversing a prior decision to dismiss the case against Harrington and the Town of Salisbury. The hearing will take place September 23, 2015 in Boston.