By Tom Duggan on October 21, 2016Comments Off on Media Lies in Presidential Race ~ Debunking the Propaganda 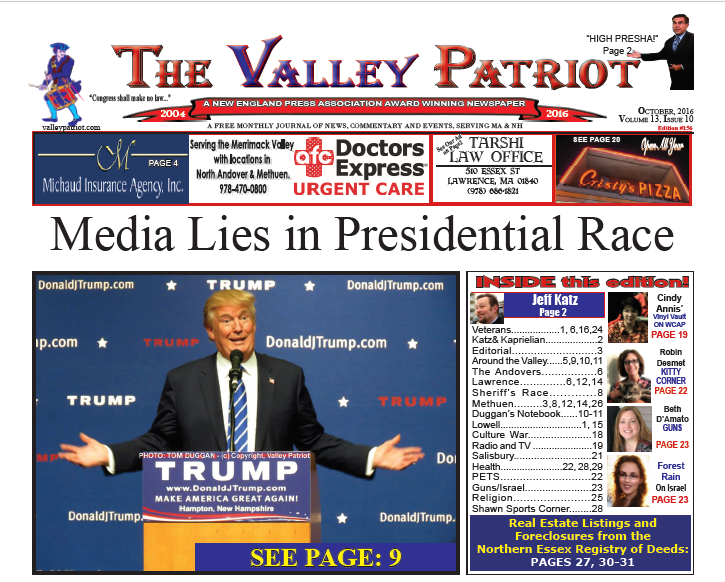 This year it has become painfully obvious to most objective news watchers that those who control the news media are more concerned with spreading falsehoods and rumors about the candidates for president than just reporting the news as it is. From CNN’s Jake Tapper falsely claiming Donald Trump pays no taxes, to Don Lemon’s claim that Donald Trump hates babies, it’s hard for the average voter to know what’s true. Here is a breakdown of the media created distractions and made up scandals.

DONALD TRUMP BRAGGED ABOUT SEXUAL ASSAULT
Like him or not, Donald Trump was bragging about women “letting” him do “whatever I want” because he’s a celebrity. He then gave an example of what women “let” him do. CNN spent weeks nuancing, and breaking down his exact words, but they never focused on the operative word in what Trump said in that conversation with Billy Bush on that bus:

Given that CNN “reporters” obsessively pick apart of every word Donald Trump utters, it was odd to note that they completely glossed over the word “LET” in the sentences above. Yes, the words were crude compared to today’s faux-expectations of civility in public discourse. But, this isn’t about how crass or crude the words were. This is about the expectation that those who provide the news do so accurately and not put a political spin on it by adding to, or leaving out part of, what someone says. We rate CNN and the anti Trump news media claims that Trump “bragged about committing sexual assault” to be: FALSE.

DONALD TRUMPS TAX RETURNS: Yes, it’s true Trump has refused to release his tax returns. From this, media Democrats have claimed Trump “lied” when he said he can’t release his tax returns because he’s under IRS audit. The claim is that Trump lied because there’s no law prohibiting him from releasing the returns. But, Trump never claimed the IRS wouldn’t allow the release of his taxes, his claim is that his tax attorneys have told him not to release returns while he is under audit. You are free to believe him or not believe him. That’s up to you, not CNN or other news outlets. We find claims that Donald Trump “lied” about not releasing his taxes as: FALSE.

DONALD TRUMP PAID NO TAXES: Hillary Clinton and her spokesmen in the news media have long claimed that Trump “paid no taxes” and that this is the reason he won’t release his tax returns. Trump’s business disclosure financials, however, show Trump paid millions if not BILLIONS in state, real estate, payroll, and other taxes. The media trick here is called bait and switch. Reporters continually say on the air and in print, that Trump “paid no taxes”, but, when it is pointed out that he paid millions in taxes, the argument is changes to ‘Trump paid no INCOME taxes’. Reporting that he “paid no taxes” and reporting that he paid “no income taxes” are two different things. Is there any evidence that Trump paid no income taxes? No. Maybe he did, maybe he didn’t. As of the time we went to print, no evidence, much less proof, has been provided that Trump paid “no taxes” or “no income taxes.” So we rate this media propaganda as FALSE.

HILLARY LIED ABOUT ONLY USING ONE PHONE FOR EMAILS: Republicans and Fox News went into a tizzy when the FBI director said that Hillary Clinton used more than 13 devices to communicate via email about classified government information. Their claim is that Hillary “lied” when she said she only used one device (a cell phone) for convenience, instead of having a device for personal use and one for classified government use. The fact is, Clinton didn’t have 13 devices at one time. She had 13 devices over her span of years as Secretary of State. As she replaced each device, she had the old ones destroyed to make sure that none of the data on them could be retrieved. We can quibble about whether or not that’s legal, but we rate the claim that Hillary “lied” about how many devices she used while sending and receiving classified emails as: FALSE.

TRUMP SAYS GLOBAL WARMING IS A HOAX: Hillary Clinton accused Donald Trump of not believing that global warming is a man-made phenomenon. Trump denied it. But, he did, in fact, tweet out that he believes global warming is a “hoax” to benefit China. We rate this claim as TRUE.

TRUMP CALLED WOMEN PIGS, INSULTED “WOMEN” – This media lie presupposes that to insult one woman means you are insulting all women. While trump called an individual woman a pig during a public spat with Rosie O’Donnell, he never called all “women” pigs. Since it is well documented that Trump insults men and women equally (remember Lyin’ Ted Cruz” and “Low Energy Jeb?”), and has never said “all women are pigs” or anything like that, we rate the claim that ‘Trump hates women’ and ‘Trump calls women pigs’ as FALSE.

TRUMP COMPARED SYRIAN REFUGEES TO SKITTLES CANDY: The Claim is that Trump compared Syrians to Skittles, and denigrated refugees by “likening” them to candy. First, it was Trump’s son who made the analogy. Secondly, in no way did he “compare” Syrian refugees to Skittles. What he tweeted was an analogy to the Syrian refugee crisis explaining that terrorists would be sneaking into the US among the populations of refugees we let into the country. If I gave you a bowl of Skittles candy and told you that only three of the Skittles were poison, would you take a handful? That was the analogy used to explain the dangers of letting millions of refugees into the country. You can agree with the analogy or the conclusion he drew, or not. That’s for you to decide, not “news”  reporters. It’s the height of yellow journalism to take an analogy and report that as a ‘comparison’ to push a narrative that someone is “degrading” people in some way. We rate this absurd Democrat CNN claim as: FALSE.

CLINTON LEAKED CLASSIFIED INFO: The claim by Trump supporters and Fox News that Clinton “leaked classified information” stems from the fact that she had a computer server that was not secured, was illegally used for classified material, and in the words of the FBI Director, was “vulnerable” to being hacked while she was Secretary of State.

But, the FBI director also said there was “no evidence” anyone gained access to it. Maybe they did, maybe they didn’t.  The evidence isn’t there. For Trump supporters and Fox News to claim, as a fact, that Hillary Clinton “leaked classified information” is at best, speculation, and at worst and outright lie. We rate this claim as FALSE.

HILLARY LIED ABOUT TURNING OVER HER WORK EMAILS, NOTHING SHE SENT WAS CLASSIFIED: According to Hillary Clinton, she turned over all her work related emails to the government as required by law (after being caught with an illegal email server in her home). The FBI director said quite clearly that Clinton did not turn over all her work related emails and in fact, several of her emails were classified, and were marked classified at the time they were sent or received. We rate the claim that Hillary Clinton sent and received classified information on an illegal server, and that she did not turn them all over to the FBI as: TRUE.

TRUMP SUPPORTED THE WAR IN IRAQ: For weeks, CNN obsessed on Donald Trump’s statement to Howard Stern years ago, “yeah I guess so” when asked if he supported the war in Iraq. This was before the troops actually went in. But, a lukewarm “yeah I guess” is hardly “an endorsement” for the war. If your mom asks you if you support her decision to remarry, and your answer is “yeah, I guess” will she interpret that as an “endorsement” of her decision? I think not. Therefore, we rate this claim that Trump “supported” the war in Iraq as FALSE, with the caveat that he did not oppose the war before it started, as he claims. As a side note; Trump was a private citizen and Hillary Clinton actually voted to send troops to Iraq.

TRUMP CALLED MEXICANS RAPISTS: From the very start of the campaign the “news” media has manipulated people’s emotions on this issue. Trump said the Mexican government is sending people to the US who are “not their best,” adding that they send rapists and murderers who come here and commit crimes. He never said all Mexicans were rapists or murderers. But, the news media manipulators love to take a generalized statement and apply it to “all” people of that general group.

TRUMP HATES BABIES: Of all the things we have heard in this election, flipping on CNN one afternoon to hear a CNN “analyst” say the phrase… “and now we learn Donald Trump hates babies.” This stemmed from Trump joking at a rally to get the crying baby out of the room, as he laughed. By the time he made the remark the baby was already out of the room. The mother of that baby said on the news the next day that she knew he was joking, and found it funny. We rate this claim as patently FALSE, and purposely misleading.

TRUMP CALLED MISS UNIVERSE “MISS PIGGY” AND “MISS HOUSEKEEPING” BECAUSE SHE GOT FAT AND IS HISPANIC
During the first presidential debate Hillary Clinton claimed that Trump called a former Miss Universe “Miss Piggy” because she gained weight, and also called her “Miss Housekeeping” because she is Hispanic. Certainly that is the claim by the former Miss Universe herself, as well as the CNN-Clinton propaganda machine. But, there is no evidence to back up this hearsay claim. Furthermore, records show that the Miss Universe organization wanted to fire the pageant winner and take away her crown, for violating her contract by gaining 60 pounds. It was Trump who defended her title and negotiated a way for her to keep it by losing the weight she had gained. Maybe Trump called this woman “Miss Piggy” and maybe he didn’t. But, there is no evidence for news stations to objectively “report” that as a fact, so we rate this claim as: FALSE.

Media Lies in Presidential Race ~ Debunking the Propaganda added by Tom Duggan on October 21, 2016
View all posts by Tom Duggan →