Methuen Chief on Drug Epidemic in The Valley

By Tom Duggan on September 23, 2014Comments Off on Methuen Chief on Drug Epidemic in The Valley 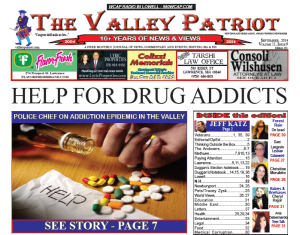 This is part III of our series on Law Enforcement in Massachusetts from our interview with Methuen Police Chief Joe Solomon. Solomon appeared on Valley Patriot publisher Tom Duggan’s radio program (Paying Attention!) last month to talk about the city’s new “shooter detection system” being used in the Methuen Schools as well as the “militarization of police” . This month we discuss the role of police in helping communities handle drug addiction.

Chief Solomon: “We use layers of defense. Back when I noticed the large number of overdoses before Christmas of last year we put together a task force. We brought Haverhill, Lawrence, Methuen, Salem, NH, Andover and North Andover together. We put together the task force because it’s a mobile issue and it affects the entire Merrimack Valley. So, in Methuen we doubled the size of our drug task force. We also forged all these relationships so everybody is working together; we are communicating information and we even did an operation where we worked in each other’s cities. I found this very valuable. I had done this back in the late 90’s in Lowell and Haverhill and I thought it worked well, exchanging officers in the different communities.”

Tom Duggan: How is that valuable to policing drug crimes?

Chief Solomon: “It’s invaluable because what we find is that my user goes to your city to buy drugs. Or my dealer goes to your city to sell with the anonymity of being in a city where no one knows who you are. So, you have officers from all over the Merrimack Valley working together in other cities and they say ‘hey look there’s so-and-so and he’s one of our dealers, or ‘we locked him up last week he’s one of our users’ and they start following him. It takes away their anonymity.”

“The other part is, it is shared information. We also work with the Essex County Sheriff’s department and they have a sergeant assigned to a DEA task force and we have an officer [in Methuen] assigned to an FBI task force, so we have been able to bring those groups in. But that’s the police side.”

Tom Duggan: I’d like you to talk about the plague of drug addiction and dealing in Methuen from a human service aspect and how the police can help addicts and families of addicts beyond making arrests.

Chief Solomon: “Let’s talk about the human services side.”

“Representative Diana DiZoglio (D, Methuen) started the Merrimack Valley Substance Abuse Task Force. We joined that task force with Phil Lahey [former city councilor] and it has grown. Greater Lawrence Mental Health is in it, we have monthly meetings, we are preparing for a meeting on September 20th (11AM) for a big event at the armory for drug education.”
“We hear from parents all the time that they didn’t realize there was something going on with their son or daughter. We hear, ‘We know he’s growing and he’s getting big but we had no idea he was involved in drugs.’”

“But that’s what’s happening. So, we are doing this big education program with the Merrimack Valley Substance Abuse Task Force. The goal is to educate parents as to what you can do to recognize if your kids are on drugs and show you the resources that are available. The other thing is, as part of this task force we had a man come to us about an organization called Heaven for Hope. He took over the old Mt. Carmel School and he is going to make that a sober house for women.”

Tom Duggan: Isn’t that sexist to only do it for women? 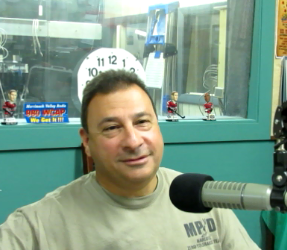 hief Soloman: “One of the reasons they are doing it only for women is because if we had a sober house for men, the neighbors would go wild. They are afraid there would be sex offenders there. So, he is doing it for women right now and it’s faith based, which I think is good. As we look back, Weed and Seed is faith based, the origins of community policing is faith based. God forbid we say God in a public building these days. God forbid we pray in a public setting, but you know what? What happened as we moved forward from the 50’s is that as the faith based organizations have gone away, the crime, disorder and drugs have increased. So, a faith based organization like Heaven for Hope will help at least those women. But, I think it gives us something where we can say we have someone who is detoxing and we have a place to take them.”

“What we are working with on the MMV Drug Task Force is giving us beds for people who need help, and giving resources to people with these addiction problems. I am a parent, you, Tommy are a parent. We have to have an answer to the questions like; Who do you go to in order to find drug education? What do these drugs look like? How do parents recognize these things? What are the signs and symptoms of drug use or abuse? What questions can I ask my kid? If I see my child’s phone and it has certain words on it, are those slang words for a drugs or some kind of a secret code kids are using?”

“So we have to worry about the behavioral and social services because law enforcement and making arrests alone is not going to solve this problem.”

Tom Duggan: We saw that you took a lot of grief from civil libertarians over the arrest and terrorism charges of the kid who made threats on social media. How do you use social media to combat drugs in Methuen? Do you check the Facebook pages or twitter accounts of people you know are drug dealers and use that to monitor criminal activity?

Chief Solomon: We do. And we are aware of a website that is used, it’s similar to Craig’s List but it’s a local website where stolen items are put up for sale. So, yes we monitor that constantly but we are also watching social media. But you know the biggest part of social media in combating crime is, for example: I received two messages last week saying ‘hey, check out this person’s social media page’. When I went to their social media website they had drug paraphernalia and photos of marijuana growing in their apartment, in our city, openly talking about it and showing it’s for sale. So we give that to my drug unit.”

“But, we have also been working with a company called Media Sonar for about four months and we were ready to sign a contract with them but it was the end of the fiscal year so we have to go back to them in the new budget cycle. Not only do they monitor social media for crimes being committed like drug dealing, but for things like the safety of children.”

This Media Sonar, in a major incident like a flood, a big storm, or God forbid a shooting at a Methuen location, we will be able to use our Media Sonar and pull up all the social media pages on a specific location on a map and see every public tweet or posing on Facebook or Instagram picture in that area. What I have found is, let’s say the incident is happening in WCAP’s building, I can zoom in and see it’s the second floor, third window from the right, and there’s a person in that office and pinpoint their exact location.”

“The technology out there is unbelievable.”

Tom Duggan: Do you worry about abuse of this technology? People with 1st Amendment concerns are going to go wild with conspiracy theories that this is just more government intrusion.

Chief Solomon: “There is a possibility for abuse but that’s why we have you. People like Tommy Duggan are going to fight and dig, and find out what is going on and talk about the 1st Amendment and the 2nd Amendment and expose the abuses that might be going on by police. The news media is very important to this democracy. You have to watch us [police] and believe me, we all know we are being watched. You ask the real questions Tommy, and we need people like you to be a check and balance on police and government to make sure this technology is not abused and people’s rights are not trampled on. I know you, and I know you love cops and you support the police, but I know you demand answers too and hold everyone accountable.”
Solomon says that the epidemic of drug overdoses and suicide attempts by addicts in the area has spiked so high that he and other law enforcement agencies are looking for new ways to deal with the issue in the Merrimack Valley.

Solomon has been the Chief of Police in Methuen since 2002, and has been a police officer for 28 years.

Part I: Solomon: Methuen to Use Shooter Detection Technology in Schools