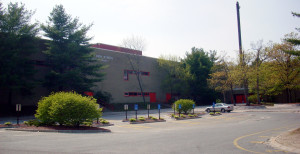 A 16 year old Methuen High School Student was arrested on Tuesday after making threats to harm himself and others, including shooting up the school.

Sources at the high school say that the student admitted he had attempted suicide the night before and made threats to other students. The incident was reported to police on Monday, October 19th. Methuen Police arrested the student on Tuesday, October 20th.

Methuen Police Chief Joe Solomon said that Methuen Police had been contacted by a Methuen High School student on Monday, October 19th. Solomon says that the student reported “a fellow Methuen High Student, advised that student should not show up for school on Tuesday October 20, 2015 because he was going to shoot up the school.”

Solomon said that the suspect has been contemplating this this for a while.

“As part of the law enforcement investigation on this matter, the Methuen Police Department interviewed the accused student in the student’s home, and conducted a search of the student’s residence,” said Superintendent Judy Scannell.

Columbine High School was the site of a mass-school shooting in Colorado in 1999.

Methuen School Superintendent Judy Scannell said that the administration acted swiftly and appropriately when contacted by police and conducted their own internal investigation. Because of Massachusetts state laws protecting the identity of minor students, Scannell would not say if the student was expelled or suspended.

COMPLAINT FILED WITH POLICE NOT SCHOOLS

“It was also confirmed at the time,” Superintendent Scannell continued, “that the student who contacted the police regarding the threats in question, had not reported the accused student’s statements to Methuen High School staff or to Methuen Public Schools administrators.”

“I certainly appreciate The Valley Patriot holding onto the information you had until we could do that. This is an unfortunate situation, but, the high school administration acted swiftly with the Methuen Police Department. Safety is the highest priority for all students and staff,”  she said.

“This is 2nd time that a student has reported to us suspicious  behavior that lead to charges for threats against the school,” Methuen Police Chief Solomon said.

Solomon said that the other incident was in August of this year when a female student called to say another student threatened to blow up the school.

“That student was charged, and that case is still working it’s way  through the courts.” 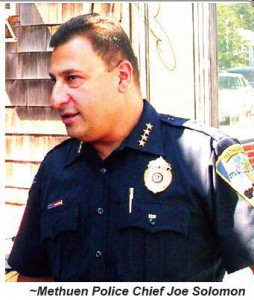 “We try every day to make schools safer than the day before. We can’t do our jobs without the help of those we serve. I want to thank the student who came forward. That student may have prevented the deaths of other human beings. That is an example of what we have been saying all along. I would ask the students and parents in our schools to remain vigilant for anything that may concern them, even rumors. We want to encourage our kids to report anything. The Methuen Police Department would rather investigate 100 cases that turn out to be nothing, than to have that one case not be reported that turns out to be something deadly for our kids.”

After the student’s arrest, the judge ordered him to be held on a psychological evaluation, but he was not “officially” charged. He is expected to be in court again for an official arraignment, November 2nd, in Lawrence Juvenile Court.

Chief Solomon said that the student arrested this week “seemed very troubled” and added, “with most kids we want to keep them out of the system. But I think the best thing that could happen for this kid is to be in the system for a while where he can get the help he needs.”

School Committeeman DJ Deeb told The Valley Patriot, “The safety and security of all of our students and personnel is our top priority. We take all threats seriously, and I trust that the Methuen Police Department will investigate this fully and take appropriate action.”