By Tom Duggan on November 29, 2015Comments Off on More Than 100 Rally for Embattled Lawrence Mayor, Rivera Says Opponents Are Corrupt 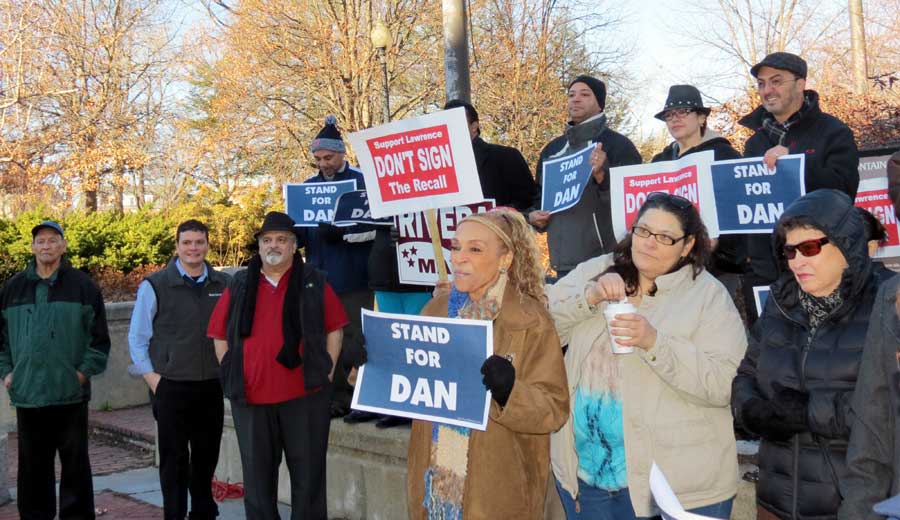 More than 100 people rallied in support of embattled Lawrence Mayor Dan Rivera Sunday on the Campagnone Common, in the wake of two recall petitions to throw Rivera out of office. Rivera is in his second year of a four year term.

Former Lawrence Mayor Willie Lantigua and his supporters have been vowing to throw Rivera out of office since they day he defeated Lantigua in November of 2013. Rivera defeated Lantigua by 84 votes. Lantigua supporters who aim to return Lantigua to power have until Wednesday, (December 2nd), to turn in more than 5,500 signatures of registered voters which will trigger a special election to remove the mayor.

Mayor Rivera said that those supporting the recall are motivated by greed and corruption from the largess they enjoyed during the previous administration saying they can no longer break the law with impunity and suddenly have to start paying their taxes.

“I don’t know if you guys saw today’s article in the paper (The Eagle~Tribune) about all the things they say we did or didn’t do,” Rivera said addressing the crowd. “The reason I didn’t respond to any of those questions is because this isn’t about what we’ve done or not done. This is a group of people who want to stop our progress,” Rivera said.

Rivera said those supporting his ouster are angry because they are corrupt and he is rooting out the criminals of the Lantigua administration.

Lawrence resident Jackie Marmol (one of the pro-Rivera rally organizers), told the crowd across from Lawrence City Hall that Rivera is the hardest working mayor that Lawrence has seen in a very long time.

Marmol read a list of Rivera’s accomplishments in his first year and half as mayor of Lawrence.

Lawrence activist Angel Rivera said, “we are here voluntarily because we love the city of Lawrence, and we support Dan Rivera and his administration. We want to send a clear and strong message of the excellent work that Mayor Dan Rivera has been doing during the first two years of his administration.”

“I ask the people of Lawrence most emphatically, do not sign the recall petition in Lawrence. Do not allow anyone to fool you.”

Lawrence City Councilor Dave Abdoo, who ran unsuccessfully against Lantigua in 2009 said he opposes the recall petition against Rivera and urged people not to sign it.

“As you all know, outside the city we sometimes get a bad reputation. Sometimes it’s self inflicted. Things like this recall is a self inflicted wound.”

“Some people say, ‘of course he’s here, he’s on Dan’s team. I’m on Lawrence’s team. I know that a recall is the worst possible thing for this city at this time.”

“There are many ghosts coming to the city of Lawrence,” Devers said of former Mayor Lantigua.

“Well I am the ghost buster. We need to stand united. I am an oreo cookie!” Devers was referring to Laborer’s Union Local 175 president Mike Gagliardi who supports the recall against Rivera and called him “an Oreo cookie” in last month’s Valley Patriot.

Rivera said he brought a lot of money into the city since becoming mayor.

“You know, we hired this woman from Lowell to come to Lawrence and in her short time here with us, we’ve had more than $14M in development grant money come into the city from  state and federal government, not to mention the millions of dollars from private funding. So, forget about whether or not I messed up with hiring someone. That’s not what it’s about.”

“This is about tax cheats, people who don’t want to pay their taxes. When they call me and ask me, ‘hey, can you help me not pay my taxes?” I say, ‘no’, that’s illegal. I could go to jail and so can you. So, pay your taxes.’ When we make those people pay their taxes they get angry. I don’t care if you own a funeral home or if you own a grocery store,” Rivera said referring to Louis Farrah of the Farrah Funeral home who is spearheading the effort to oust Rivera.

“If you are a police officer in this community and you treat people like crap, or you don’t do your job, you are on notice. We are going to discipline you and you are going to be fired. So, you can get behind any political movement you want to get behind, but we are going to hold you accountable,” Rivera said referring to Lawrence Police Officer William Green, who is also supporting the recall effort and was the only public face of the recall for months.

“They thought they were going to get a couple of members of the city council to help them. Every day that I would discipline someone [city workers], I would get a call from the council president (Modesto Maldonado) saying ‘hey, what are you doing?’ and this is what I’m telling everyone. This has got to change. This is not about me. This is about all of us.”

In an exclusive interview after the rally, Rivera told The Valley Patriot that the recall effort is nothing more than supporters of former Mayor Lantigua trying to put him back into power, so they can continue ripping off the city.

“Listen, when you win by [84] votes and they tell you right away they are going to do a recall against you, you’ve gotta know that’s what they are trying to do. So, when you get into office and you try to do the right thing, and you go after people we know haven’t paid their taxes in all this time, and we go after employees that never should have been hired from the beginning, it’s basically going after the philosophy of the former administration. They are trying to keep their stronghold [on the city]. So, I’m not surprised he’s [Lantigua] is involved in this.”

Asked what he will do if the recall petition is successful and there is a special election to remove him, Rivera said he was taking it one day at a time, adding “when we get to that bride we will talk about that.”

Rivera said that the constant recall efforts by former Mayor Lantigua and his supporters was a waste of time, money and city resources. He said that the time he must spend with the city clerk, the city attorney, and the distraction of the issue takes time away from governing the city. He added that this is what Lantigua and his supporters want, if they can’t recall him they can hinder his ability to get major projects done.

“We know what the game is, and the people of Lawrence, the voters of Lawrence are not fooled. They see what’s happening here. They didn’t get their way in the last election so they are trying to undo the will of the people.”

If the recall supporters get more than approximately 5,500 signatures from valid Lawrence voters, a recall election will be held where voters will be asked to vote on the removal of Rivera. If that question passes, Rivera is removed immediately and the person who gets the most votes on that day will assume the mayors office immediately to fill out the remainder of Rivera’s term.