Neil Diamond ~ IN THE GROOVE with CINDY ANNIS

By ValleyPatriot on February 3, 2018Comments Off on Neil Diamond ~ IN THE GROOVE with CINDY ANNIS 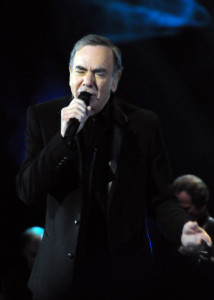 I hope you’ve been enjoying reading these articles every month. In the new year, you will learn more about the artists and groups from the 50s, 60s, and 70s you love. Let’s start the new year off with Neil Diamond.

Neil Diamond was born and raised in Brooklyn, New York on January 24, 1941. His real name is Neil Leslie Diamond. He was in the Freshman chorus and was a member of the choral club at Erasmus High School. When he was 16 years old, he spent the summer at Surprise Lake Camp. One evening at the camp, Pete Seeger came to perform for the children. Seeing him perform and sing lyrics that other children at the camp wrote themselves, inspired Diamond to write music. When he got home from camp, his parents presented him with a guitar. Soon after he received the guitar, Diamond took music lessons.

Learning from the struggle his parents went through to support the family financially, Diamond went to New York University on a fencing scholarship. There he studied pre-med. Most of the time, Diamond was bored during his classes, and wrote song lyrics during most of his classes. Eventually, he started to skip school so that he could take the train to the Brill Building. He was a senior and only 10 credits away from graduation when he dropped out to accept a 16-week job writing songs for Sunbeam Music Publishing.

In 1962, Diamond started recording songs with Jack Parker, his high school friend. All of their songs flopped, and the duo split later that year. After they split, Diamond recorded a few songs on the Columbia label. Since none of the songs were successful, Columbia dropped him from the label. For the next several years, he would be writing songs for many publishing companies. His songs were made famous by artists such as The Monkees, Lulu, and Elvis Presley.

In 1966, Diamond had his first hit record on the Bang label. The #6 song was called ‘Solitary Man’. The other songs from that year include ‘Cherry Cherry’ and ‘Kentucky Woman’.

While Diamond was on the road recording songs, his wife and daughter were at home struggling to get by. As a result, Diamond started to perform live to receive steady pay. Diamond’s manager Fred Weintraub showed him how to be a performer. It took many years before Diamond felt comfortable performing.

On March 18, 1968 Diamond cut ties with Bang records and signed a contract with Uni Records. On that label, he recorded a #22 song called ‘Brother Loves Travelling Salvation Show’. After that, the mood of Diamond’s songs changed from rock ‘n roll to sweet and gentle ballads.

Moving forward to 1972, Neil Diamond showed that he could be a truly fun performer with his live double LP called ‘Hot August Night’. The album was recorded at the 5,000-seat Greek Theatre in Los Angeles. The stereo sound in this outdoor concert along with a 35-piece orchestra made the double LP sound awesome. The album stayed on the charts for 78 weeks.

Years later in 1977, Diamond recorded ‘You Don’t Bring Me Flowers’. A year later, Barbara Streisand recorded a sweet version of the song. The song originally became a duet by the hands of WAKY program director Gary Guthrie. By October 1978, Columbia records brought Streisand and Diamond into the studio to record the #1 record everyone knows and loves today.

The 76-year-old Diamond still performs live. After the 9/11 attacks, Diamond like other artists performed live in New York. He added the phrase ‘stand up for America’ to his 1981 song ‘America’. Diamond performed ‘Sweet Caroline’ for the New Year’s Eve celebration on FOX.