By ValleyPatriot on April 5, 2012Comments Off on News Media Racism – Latinos Used as a Football 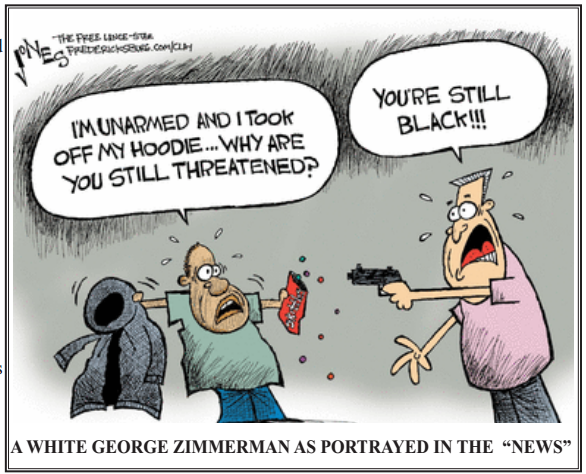 The media coverage of the recent Trayvon Martin case (where a black man was shot to death by a Latino) should have Hispanics in the United States in an uproar. Oddly enough, we have not heard one story in one media outlet showing this to be true.

Without speculating on whether or not Martin was the victim or George Zimmerman was a murderer, we prefer to use the space in this editorial to point out how Americans of Latino descent are abused by the press and how the classification of “Hispanic” changes depending on the skin color of other people.

What the Trayvon Martin case has made most clear to anyone who is paying attention, is that the way a Latino is reported on in the news hinges on how dark their skin color is.

Case and point: When a white police officer is accused of beating a Latino, the Latino is classified as a “minority” (and equated with blacks) in the news and the implication is always made about the “white” officer’s motives.

We have seen this in multiple cases in Lawrence and in Boston recently.

But in the Trayvon Martin case, (a case where the assumed victim is black, and the assumed perpetrator is Latino), news broadcasters consistently choose to classify the Latino as “white” majority.

To choose how to portray a person’s race in the media based on the color of the victim’s skin shows how truly racist, self-serving and political the news we see, hear and read every day has become.

What’s worse, the very fact that this Florida case is so overly covered in the news while so many other cases of black on black crime, black on Latino crime and Latino on Latino crime goes willingly ignored, shows us the racist motives of the American news media.

That results in more stories for the news media to cover, the employment of more reporters, camera men, editors and anchors. It also results in more distrust among different races of people and usually leads to more racial violence.

We are curious as to why Americans of Dominican, Puerto Rican, Mexican and other Hispanic descents have not expressed any outrage over the blatant racism in the media against Latinos.

If George Zimmerman was the 6 foot black man who had the gun and had shot a short, Latino Trayvon Martin, we know that the news would not have covered this case at all.

The local news media in Florida who might cover it, would be bending over backwards to extricate the races of the two men from their stories, deciding for us (once again) what facts are important to a story and what facts are not. Despite the fact that Latinos have shown no outrage over a Latino being portrayed as a white gunman, we at the Valley Patriot are more than incensed.

What’s more, we believe that George Zimmerman has been unfairly portrayed as guilty by the news media before all the facts are in, simply because his skin color is lighter than the man he shot.

We do not know whether George Zimmerman justifiably shot Trayvon Martin or if he was a gun toting murderer as the news reporters in this country want us to believe.

To us, that has always been the definition of racial prejudice.

We are just puzzled as to why nobody else seems to think so.