By ValleyPatriot on April 24, 2014Comments Off on NH State Senators Should Strengthen NH Domestic Violence Laws and Further Protect our Beloved Four-Legged Friends 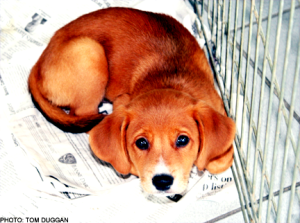 House Bill 1410 provides our judges with flexibility in handling difficult domestic violence cases to grant custody of a pet to the individual seeking protection if appropriate to do so. Such an order can also prevent an alleged offender from having contact with the pet and using it as leverage against the victim to drop the order. Finally, the legislation adds animal cruelty to the factors judges can consider when determining whether a protective order is warranted. Each provision is an important addition to New Hampshire’s already strong civil domestic violence laws.

These protections are hardly a new concept. If Senators do the right thing by passing HB 1410, New Hampshire will join the rest of New England and become the 26th state to permit the inclusion of pets in protective orders.

Some have questioned whether this legislation is necessary. As the Director of Community Relations at the Salem Animal Rescue League, I am sadly familiar with the necessity of this legislation. The National Coalition Against Domestic Violence found that between 25% and 40% of battered women feel they are unable to escape abusive situations because they worry about what will happen to their pets should they leave. There is legitimate evidence that people involved in violent acts against animals present a danger to the public that must be addressed.

To some, staying in an abusive situation for any reason is hard to understand. However, I speak with individuals everyday who without hesitation would put their own safety or lives at risk to protect their pets. This legislation recognizes the reality of how the majority of individuals view their relationship with their animals—not as pieces of property but as valued members of their family. In fact, a recent Gallup poll found that 98% of Americans consider pets to be companions or members of the family. Unfortunately, an element of domestic violence situations includes the abuser alienating their victim from friends and family, effectively removing their support systems. In these situations, pets are oftentimes victims’ primary source of support and comfort, taking on even more emotional significance and attachment than a pet in an otherwise healthy environment.

The facts and statistics bolster the importance of HB 1410. According to the Animal League Defense Fund, animal abusers are five times more likely to commit violent crimes against humans. This is a direct and undeniable link between individuals who kill or injure their pet and subsequently harm their spouse or children. Additionally, the American Humane Society reports that 71% of pet-owning women entering shelters reported that their abuser had injured, maimed, killed or threatened family pets for revenge or to psychologically control victims. 87% of these incidents occurred in the presence of the women, and 75% in the presence of the children, to psychologically control and coerce them.

There also are broader implications that affect children. Abusers often kill, harm, or threaten children’s pets to coerce them into sexual abuse or to force them to remain silent about abuse. Disturbed children kill or harm animals to emulate their parents’ conduct, to prevent the abuser from killing the pet, or to take out their aggressions on another victim.

Incredibly, there are active opponents to this sensible measure. HB 1410 merely expands protections against animal abuse in domestic violence situations. It facilitates the escape of a victim of domestic violence who might remain in a violent situation to protect their pet and provides judges with flexibility to ensure the safety of victims. No human rights are being given to animals. HB 1410 is not an animal rights piece of legislation.

Advocates and legislators work diligently to secure adequate protections for victims of domestic violence here in New Hampshire. Unfortunately, because of the insidious nature of abuse, it can be difficult to grasp the totality of far-reaching effects domestic violence has on a victim’s life. The State Senate now has the opportunity to take another step in the right direction by providing another tool for victims to break free from the cycle of violence and to keep themselves and their loved ones safe from abuse. House Bill 1410 is a natural progression of New Hampshire’s existing domestic violence and animal cruelty protections and the State Senate should pass it without hesitation.

D.J. Bettencourt served as a State Representative in the New Hampshire House of Representatives from 2005 to 2012 and was the House Majority Leader for the 2011-2012 legislative term. He currently works as the Director of Development and Community Relations at the Salem Animal Rescue League.