By Christine Morabito on May 5, 2012Comments Off on Our Little Tea Party Is Growing Up 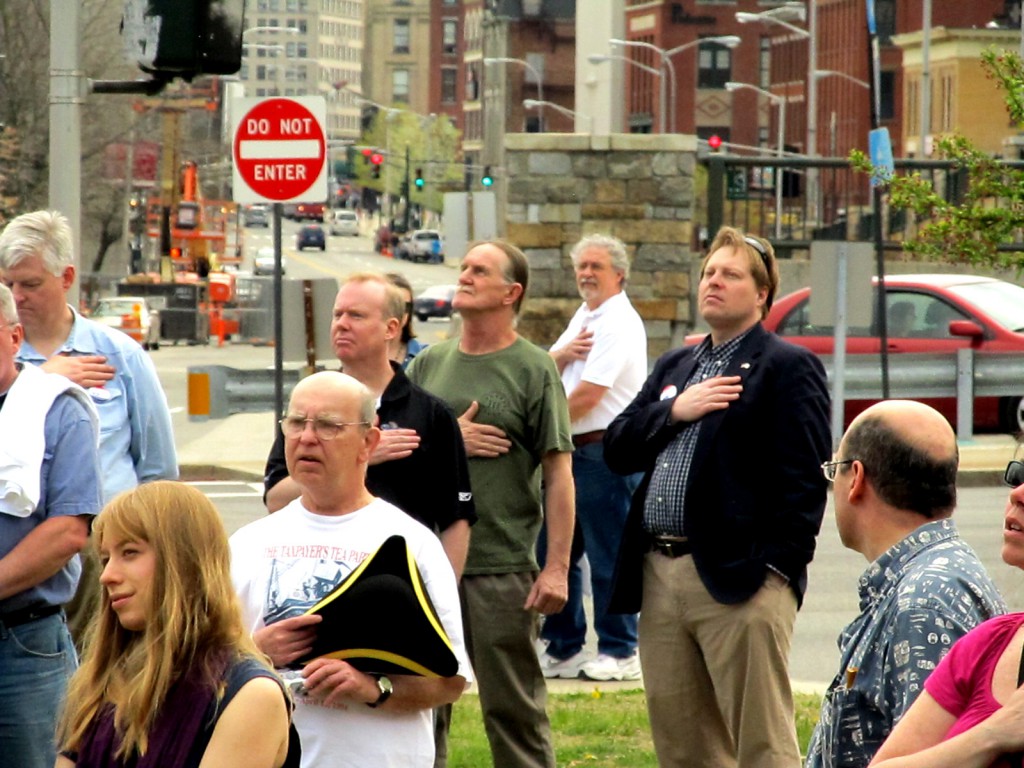 Growing pains are inevitable for any fledgling organization. The Tea Party in Massachusetts was stretched to its outer limits over the past few weeks as our focus and mission were put to the test.

The Greater Boston Tea Party and other large Tea Party groups in the state have been well served by their sharp focus on the common sense fiscal issues that unite citizens from diverse backgrounds and political parties. A minor fracture appeared when a small group within the Tea Party chose to elevate the divisive social issues, attracting protests and negative press.

Now, in an effort to put this incident behind us, it is time to lick our wounds, strengthen our resolve and return to our time-honored principles of constitutionally limited government, free speech, free markets, individual liberty and personal responsibility.

That said, I would like to congratulate the Worcester County Tea Parties for another successful Tax Day Rally in Lincoln Square. Their gathering on April 15 exemplified the heart and soul of the Tea Party and I was proud to have participated.
There has been speculation – or perhaps wishful thinking from our rivals – that the Tea Party has reached its peak and fizzled out. The evidence suggests otherwise. The Greater Boston Tea Party is experiencing a healthy influx of new members at our monthly meetings and growing our Facebook membership on a daily basis. Our members are also quite active on Twitter and in the blogosphere, giving us a large presence in the social media arena.

While the Tea Party may be less publicly visible, the movement is far from stunted. In our infancy, we protested and rallied often because we did not know what else to do. As we mature, we are learning to channel that energy into grassroots action that can affect change. By educating ourselves and others about public policy, volunteering for campaigns, writing letters and calling our representatives, we are working smarter, not harder.

In this busy election year, we are looking forward to some exciting projects. We are currently compiling a Candidate Questionnaire that will clarify candidates’ positions on issues important to our members, with questions about taxes, spending, government regulations and health care reform. The questionnaires will be formulated into voter guides that will ultimately help citizens decide who might best represent them.

On June 23 we will host a Citizen Journalist Training provided by the Franklin Center for Government & Public Integrity. The training will consist of an exciting day of workshops designed to inspire “citizen watchdogs” to detect and expose corruption and taxpayer abuse at all levels of government.

With the goal of demanding transparency, accountability and fiscal responsibility from our elected officials, attendees will be educated on researching open records laws, filing Freedom of Information requests and using the power of the internet to spread their message. We will have more information about this event as the date draws nearer.

Any time we can clearly articulate the Tea Party message, especially to a non-traditional audience, we win. I recently had the tremendous opportunity to speak about the Tea Party to a Boston College political science class. Unsure what to expect, I had a sneaking suspicion that I was the only Tea Party person these people had ever met. I was uneasy about having to speak for an entire class period, so I brought along a DVD just in case I ran out of material. I began my presentation by playing a video of Rick Santelli’s rant from the floor of the Chicago Mercantile Exchange, which was credited with giving birth to the Tea Party movement. As I spoke, I shared a slideshow of Tea Party pictures I had collected over the years, depicting the evolution from our humble beginnings. I hoped that the students would ask questions, but feared they would not.

Luckily, my fears were never realized. The 50 minute class flew by and we truly ran out of time. The students were deeply engaged, asking thoughtful and challenging questions. What a delightful group of young people.

I may not have gained any converts, but I do believe I was able to convince them that the Tea Party neither breathes fire nor eats small children. We’re getting there.