By Christine Morabito on February 10, 2015Comments Off on Our Toxic Relationship with Wind Power 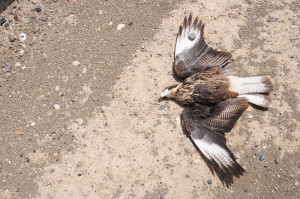 If clean, safe and efficient energy is to be our standard, then why use wind power at all?

When we examine the entire process, the construction and operation of wind turbines is a dangerous and toxic affair. It begins with the mining of rare earth minerals, a collection of chemical elements manufactured mostly in China. The ill-protected workers are exposed to hazardous materials like hydrofluoric acid and radioactive particles. These substances are then exported worldwide, for use in wind turbines as well as computers, cell phones, hybrid cars and energy saving light bulbs.

The process of refining of these elements leaves death and destruction in its wake, polluting farmland, killing livestock, seeping into waterways and poisoning drinking water. Besides the devastation to the environment, nearby villagers report significant health problems, like bone, respiratory and heart diseases. Some residents suffer helplessly while their teeth fall out. But, since all this is occurring in the Far East, Western environmentalists don’t seem particularly concerned.

Meanwhile, in the United States, the massive windmills gobble up valuable habitat, as do the roads needed to access them. These eyesores ruin otherwise picturesque landscapes, and are built with little regard for the migratory paths of protected wildlife. The deadly blades can reach speeds up to 170 mph, often chopping birds into pieces. Most recent data estimates that 600,000 birds and hundreds of thousands of bats fall prey to this “green” technology every year.

In the 30-odd years that wind energy has existed, only 2 companies have been prosecuted for illegally killing protected birds. The first was in 2013, when the U.S. Department of Justice and Duke Energy, of Wyoming, announced a $1 million settlement related to the deaths of 14 golden eagles and 149 hawks, blackbirds, larks, wrens and sparrows.

In January, 2015, Pacific Corp, also in Wyoming, was ordered to pay $2.5 million for killing 38 golden eagles and 336 other protected birds.

Under the auspices of fighting climate change, the Obama Administration is awarding wind-power companies a 30-year amnesty in the form of “take permits,” which allow the killing of endangered species. It’s ironic that our tax dollars are being used to study and protect endangered species, while simultaneously subsidizing an industry that is killing the aforementioned animals.

By working with the U.S. Fish and Wildlife Service, wind producers can avoid creating killing fields. The key is to bypass well-known migration routes.

I spoke to Bob Johns, Public Relations Director at the American Bird Conservancy. When holding energy companies accountable, Johns says, “green energy is held to a different standard.” The problem is one of selective enforcement. Fish and Wildlife Service guidelines are voluntary and not enforced via regulation like those governing oil and electric companies. Johns stressed that “wind producers are not ‘mom and pop’ businesses, but large corporations,” with little incentive to follow mere guidelines. He believes regulations are needed to stop the egregious killing of birds and level the playing field. Deadly turbines are a worldwide problem, with wind farms in Spain, Belgium, Sweden, Germany and the Netherlands, among others.

What exactly is the up-side? Wind energy is expensive, costing about twice as much as conventional power sources. And, since wind is heavily subsidized, taxpayers fund it before and after it is produced, as evidenced by the infamous Cape Wind project in Massachusetts, which is already $10 million over budget. Wind energy is not particularly efficient, producing only between 3 to 4 percent of our country’s electricity. Like other alternative energy sources, turbines must be backed-up by fossil fuels when the wind isn’t blowing.

Like all fledgling energy sources, new technologies, combined with regulations, will make wind energy safer, cleaner and more efficient. Through innovative filtration systems, we have made great strides in removing pollutants from fossil fuel emissions. The plastics we have come to rely on were once discarded waste products from oil refining, proving that the human race will continue to innovate – because that’s what we do.

While there is risk in producing every type of energy, the risks of using fossil fuels are greatly exaggerated; the benefits rarely mentioned. The well-funded, well-connected environmental lobby has an ideological, knee-jerk reaction to energy. In their world, fossil fuels = bad, alternative energy = good.

Massachusetts State Senator, Kathleen O’Connor Ives plans to introduce legislation to ban the practice of hydraulic fracturing (fracking) in Massachusetts. While carrying some hypothetical risk, fracking has the phenomenal ability to make America energy independent. Lower energy costs make us all richer, and we are sending billions less to our oil producing enemies – who, as we speak, are plotting our demise.

I know Senator Ives to be a reasonable legislator, and I’m hoping she and others will consider the pros and cons of every energy source at our disposal. In our quest for energy alternatives, facts should trump ideology. The earth and all its inhabitants deserve nothing less.

Are Rare Earth Minerals Too Costly for Environment?