By Paul Murano on November 9, 2010Comments Off on Paying Attention! Radio Program returns to the airwaves 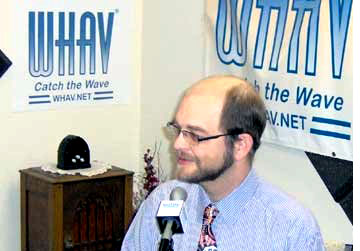 Valley Patriot president and founder Tom Duggan announced last week on his Facebook page that the Paying Attention! Radio Program, has been picked up by WHAV radio in Haverhill and now airs on Wednesday nights from 6-9PM.

Duggan said that the three hour talk show featuring local politics, celebrities, news, opinion and analysis on local and state issues has not change its’ format in any way.

“This is a great fit for WHAV, for me personally, and for Paying Attention! Nothing about the format of the show will change, but there will be one difference,” he admitted.

“Nobody is going to be telling me what I can and cannot say on the air.”

“Nobody is going to be controlling the topics I talk about or the way I deliver my commentary. Tim Coco is a professional businessman, and he understands that for Paying Attention! to be successful he has to leave me alone to do my thing. I am going to call it the way I see it no matter who it pisses off and whether the people I am covering are friend of foe. My loyal listeners have come to depend on me speaking my mind. I could no longer do that at WCAP.”

Duggan said that WHAV owner Tim Coco is a “visionary” who “understands how critical it is to integrate new technology and change with the times.

Tim Coco is looking to take talk radio and broadcasting into the future. The facility in Haverhill has state of the art streaming technology. Tim has even integrated Xelocast audio and video streaming and he has even created cell phone application technology so that listeners can easily check out WHAV programming on their blackberry or IPhone.”

“The future of talk radio is internet broadcasting, and taking advantage of other media sources, there’s no doubt about that. So, having WHAV also pipe their audio feed into cable access TV channels across The Valley gives us access to supervoters,” Duggan said.

That is the audience which my show appeals to most, people who pay attention to local issues and care about their neighborhoods.

“Tim Coco is one of those people revolutionizing the medium and is far ahead of his time. This is going to be fun.”

Duggan also said he is glad to be working again with an old colleague from his WCCM days.

“I am really happy to be working with Mark LeMay. I worked with Mark at WCCM years ago and he is a guy who truly understands Haverhill and Methuen. But he’s also someone who gets that what happens in Lawrence affects everyone on the North Shore more than any other community. There is no short sightedness at WHAV. They are long term thinkers.”

The Valley Patriot is a monthly newspaper that distributes to 28 communities throughout The Valley.

Duggan’s Paying Attention! Radio show was canceled after a continuous 6 year run on WCAP. Duggan had also served as a street reporter often calling into the station with live, breaking news stories from the scene of shootings, fires and other news events.

“I was never paid a dime the entire time I was at WCAP and I never asked for a thing but for them to leave me alone and do my show the way I wanted to do it. It was a good run and I learned a lot about the Lowell, Dracut and Chelmsford area. That will continue to be a focus of the show at WHAV as we turn on our listeners and our readers to a new market,” Duggan said last night.

The Paying Attention! Radio Program debuted on WCCM in Methuen in the year 2000 and went from a weekly Saturday morning program to a daily show from 2001-2003 when Duggan took the show to WTTT in Quincy. There he partnered up with Lawrence native Jimi Carter to debut “Coffee with Carter,” a daily Boston talk show airing in morning drive time.

Duggan changed direction in late 2003 however when he took the show to WCAP in Lowell striking a deal with former owner Maurice Cohen.

Cohen sold the Lowell station to Sam Poulton and Clark Smidt and retired from radio in 2008.

Tom Duggan is the president of Valley Patriot, Inc., a former Lawrence School Committeeman, the former political director for Mass Citiens Alliance and a former radio host on WCCM, WCAP, WTTT, WROL and WEZE. He was also a producer at WROL, WEZE, and WTKK.

You can email your comments to valleypatriot@aol.com