By Tom Duggan on December 9, 2004Comments Off on Paying Attention! with Tom Duggan

The Grinch is REAL! 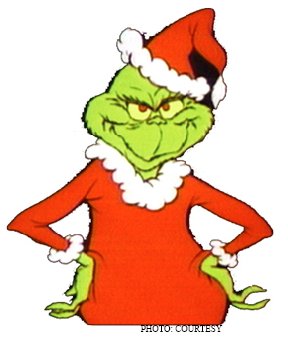 Warning: This column may offend anyone bothered by truth, goodness and holiday celebrations!

No longer just a children’s fantasy story, “The Grinch Who Stole Christmas” is alive and well in modern day America.

But, the real Grinch doesn’t live at the top of Mount Crumpet. No, no, he resides in the cold, black hearts (and offices) of atheist groups, the ACLU and every person who tries to stop others from celebrating the season of giving, the season of charity and the season of happiness for children and their families.

Just as the fictional Grinch came down off Mount Crumpet to steal Christmas from the “Whos down in Whoville,” these real life Grinches come out from their caves once a year filing court actions, and stealing Christmas from children anywhere they can.

What’s so frightening about today’s real-life Grinches is that they are even more mean and  irrational as the fictional one.

To these people, God is to be shunned, goodness is “offensive,” and the mere thought of another person celebrating a holiday rooted in religion … that’s just plain loathsome.

Dr. Suess himself couldn’t have possibly imagined that his creation would someday be a reality in the form of modern day religious bigotry.

But here we are, a culture under attack by a very small minority who cringe at the site of a Santa Claus or a Christmas angel.

Now, the Christmas-hating Grinches are even filing lawsuits and complaining about people who put up Christmas displays on their own private property, using local zoning regulations to restrict the myrth and merriment of their fellow citizens. They’ve even found ways to use condo and neighborhood associations to adopt intolerant bylaws that discriminate against people of faith (and even the faithless who enjoy the secular American holiday tradition).

Well, they are offended of course. Their anti-American beliefs of freedom from religion and freedom from speech have become a platform they only use to deprive others (mostly children) of joy and happiness.

As if the sight of pine tree with colored lights is the same as using a racial slur… or the sound of children singing Jingle Bells is equal to hearing Hitler Youth songs about exterminating Jews.

On second thought, the ACLU and the Christmas-haters have defended the “rights” of Nazi’s and the Klan to offend, which I guess begs the question: How is a Christmas tree or a Christmas song more damaging to society and more offensive than racist Nazi symbols and songs?

How is it that “offensiveness” is the standard for stopping Christmas displays but not so much for the hateful demonstrations of racists and fear mongers? Doesn’t free speech apply to everyone regardless of the type of speech? Or is speech only prohibited today when it’s about goodness, religion, God, Christmas and other “objectionable” evils to these confused and empty souls?

It’s really about the narcissistic few who want to erase the words “…or the free exercise thereof” from our first amendment’s freedom of religious expression. They hate God and they hate the fact that Christmas is rooted in religious tradition. Even though to many, it is a secular American tradition practiced by people of many (and no) faiths at all.

Personally, I have had enough of the sanctimonious sound bite arguments, backward thinking and dishonest debate. I’ve had enough of people forcing the rest of us to sanitize society from words and symbols that only evil could possibly find “offensive.”

All the while, the “offended” are lecturing the rest of us about being tolerant of weird sexual life-styles, compassion for criminals and “accepting” those who views things differently.

It’s time to stop giving in to these people and say enough is enough.

We shouldn’t be fearful of offending someone with the goodness of Christmas. We shouldn’t be afraid to say to anyone “offended” by a pine tree with lights that they need serious psychological help.

People who so intolerantly demand that the majority bow down to their lack of beliefs (or their hatred for faith and goodness) and then force us to remove everything that offends them should be shunned year-round.

The fact is, Christmas is rooted in Christianity but it is also celebrated by atheists, agnostics, Jews, and others. It is, to some, a secular American holiday which has evolved and taken on a whole new meaning than just the birth of Jesus Christ. Allowing the free exercise of Christmas celebration on public property does not establish a government religion. Anyone who says otherwise is fooling themselves in order to fool the rest of us.

But we are not fooled.

It’s not we who celebrate Christmas who are offending others. Goodness is not an offensive trait. In the real world we have to recognize that it is those who hate God and Christmas who are being offensive. It is they who should be more tolerant of symbols and songs, the values of which they certainly do not share. It is the Grinch who must tolerate the will of the majority, not the majority who must be inconvenienced by a monster who takes great joy in depriving others of happiness.   Just imagine … if the Whos down in Whoville, instead of celebrating Christmas over the objections of the “offended” Grinch, removed Christmas from their little town square so as not to offend him with their infernal “singing” and happiness heard all the way up on top of mount Crumpet?

Would Whoville be a better place?

This column was originally published in The Valley Patriot, December 2004 edition.

Tom Duggan is the president of Valley Patriot, Inc., a former Lawrence School Committeeman, the former political director of Mass Citizens Alliance and hosts the Paying Attention! Radio Program on WCAP, 980AM, every Saturday from 10am-1pm. You can email your comments to Tdugjr@aol.com