By Tom Duggan on August 15, 2018Comments Off on Police Come Up Empty Handed in Tense Standoff in Lawrence Search for Stabbing Suspect with a Gun 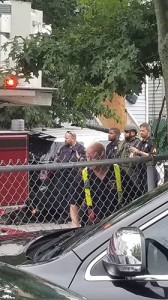 It was a tense hour and a half Wednesday morning at the corner of Bunker Hill and Lawrence Street as police responded to a man running into a building with a gun believed to be a stabbing suspect from yesterday.

Lawrence Police called in the swat team, the fire department, North Andover K9 and other special Law Enforcement units as they meticulously searched each room on each floor of the multi dwelling building.

Police say they are looking for a tall Dominican male 6′ tall with dark clothing and a maroon hat (known to be word by the gang that controls that neighborhood).

The fire department used a ladder to help police gain access to the roof where they believed at one point the suspect may be hiding. 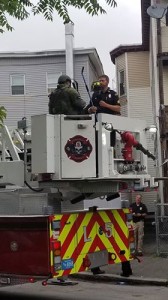 Dozens of onlookers including local gang members gathered to watch as traffic control closed off several streets in the area and canvassed the crowd to see if he had slipped past them and was hiding in plain sight.

The search lasted more than an hour and a half, but after checking every crevice of the building came up empty handed.

The suspect is known to police who shared a photo of the suspect via text message to all first responders at the scene.

Police Come Up Empty Handed in Tense Standoff in Lawrence Search for Stabbing Suspect with a Gun added by Tom Duggan on August 15, 2018
View all posts by Tom Duggan →