By Tom Duggan on July 13, 2015Comments Off on Police Recover 9MM Handgun, Arrest One in Armed Robbery 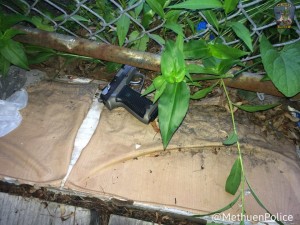 Methuen Police Chief Joe Solomon said it was just a matter of being in the right place at the right time.

Just before 4AM Saturday morning, Methuen Sgt. Shawn Moore happened to be patrolling Lawrence St. when he saw three suspicious men near Methuen Liquors, who fled when they saw the officer.

Sgt. Moore was then approached by a man who said that he had just been robbed at gunpoint by three men who took his jewelry.

With the help of The Lawrence Police, Essex County Sheriff’s Lt. Tom Cote and Sgts. Pickles and Pomerleau, as well as K9 Dash, one suspect was discovered hiding behind a car one street over on Tenney Street. .

Officer Pilz recovered a Ruger 9mm, semi-automatic handgun and two jack knives in the alleyway beside  the liquor store.

22 year old Alexander Saez of Methuen Saez was found in possession of the stolen jewelry. He was arrested and charged with Armed Robbery with a firearm, Assault by Means of a Dangerous Weapon with a firearm, Resisting Arrest, and Larceny of Property over $250.