By Christine Morabito on June 6, 2011Comments Off on President Barak Obama’s Divided States of America 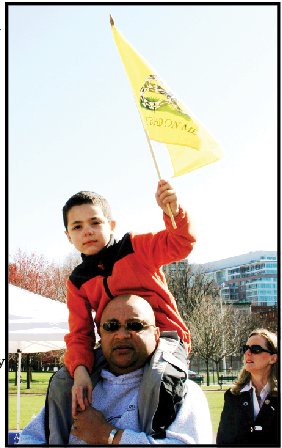 After we elected our first black president, I recall Rush Limbaugh correcting a caller who predicted that henceforth, liberals would finally stop playing the race card. Rush disagreed, arguing that race relations would worsen, not improve. In Limbaugh’s opinion, you would now be unable to criticize the president without being called a racist. As usual, Rush was right.

Suddenly millions of average, mild-mannered Americans, many of whom had voted for Obama were magically transformed into deranged racists for having the audacity to speak out against a government that was harassing the people with higher taxes, oppressive regulations and an expanding welfare state.

Obama himself perpetuated the slander by speaking mockingly of “folks waving tea bags around.” He said there were dark aspects of the Tea Party that were not only anti-immigrant, but were troubled by what he represented as president.

Then the divisive rhetoric jumped the shark. Obama accused Cambridge police of being racist because they dared to question his friend Henry Louis Gates, who became belligerent when he was discovered breaking into his own home. Admitting he did not have all the facts, in the president’s opinion the police “acted stupidly.”

In my four decades on this earth, I have never been accused of being racist until Barack Obama came to power. I have also never seen my country more divided by race or political ideology.

Attorney General Eric Holder actually used the term “my people,” meanwhile mysteriously dismissing charges against members of the New Black Panther Party, who militantly intimidated voters during the 2008 election. Who is he protecting? In an effort to incite black racism, Panther leader Shamir Shabazz went on a videotaped rant about killing “crackers” and “cracker babies.”

I was recently reminded of the deep divide when I attended an Elvis Costello concert in Boston. Being an Elvis fan since the 80’s, I frankly never cared what his political philosophy was. I justified the exorbitant cost of the ticket, thinking I deserved a night out, free of politics. So, there I was thoroughly engrossed in the experience when the night took a dark turn. On stage was a small television playing only static. The backdrop was a screen displaying a test pattern. Elvis sarcastically remarked “As you can see the TV is set to FOX News.”

He went on, announcing that the backdrop was dedicated to Glenn Beck “because that’s about as much sense as he’s ever gonna make.” Talk about a buzz kill. I realize that musicians are entitled to their opinions, but I assure you I did not pay $140 to have my ideology insulted. Furthermore, I question why he would risk alienating a large segment of his fan base—unless he truly believes that his audience feels the same way. I am not sure how he reconciles Beck’s 3 million followers or Fox News being on top of the ratings for the past 9 years.

Perhaps Costello has been influenced by our divider in chief, who has been pitting one side against another from the very beginning. Remember Joe the Plumber? He was wrongfully investigated and humiliated by government officials after he challenged Barack’s “spread the wealth” remarks. In an effort to break his spirit, “Joe” was made an example of for disagreeing with our thin-skinned president. This tactic, while not new, has been supercharged by Obama’s accomplices in the media and leftist worker bees like ACORN, AFL-CIO, SEIU, the Socialist Party USA and MoveOn.org, who have devoted themselves to nourishing the fetus of their king.

Obama has been out of step with average Americans on virtually every issue. He supported the wildly unpopular plan to try 911 mastermind, Khalid Sheikh Mohammed, in Manhattan rather than before a military tribunal. Most Americans understood the risk this posed to New York City and were opposed to allowing this terrorist a platform to spew his hatred. The president also promoted building the terrorist-funded Ground Zero Mosque against the will of the people.

Even more bizarre has been our president’s attack on entire organizations, as he has done with Fox News, the Chamber of Commerce and Americans for Prosperity. During the health care debate he accused doctors of unnecessarily removing body-parts to realize bigger profits. And what’s with suing Arizona for enforcing existing immigration laws? He told Hispanic supporters, “We’re gonna punish our enemies” and “reward our friends who stand with us on issues that are important to us.” What kind of president speaks of his detractors as enemies? He recently threatened “hand-to-hand combat” if Republicans gained control of the House and/or Senate. This graceless rhetoric is more befitting a union boss than a president.

The obscene way Obamacare was passed woke people to the realization that despite a CNN poll showing 59 percent opposed it, Obama intended to have his way with us — for our own good, no doubt. I am stunned by the arrogance of Washington elitists who think they can run the enormously complex health care industry better than the private sector. The ugly truth is that nationalizing health care will cost over a trillion dollars, increase taxes and force insurance rates to skyrocket.

Barack Obama is a strict ideologue with pathologically high self esteem. What makes him dangerous is that he is perfectly willing to accept short term political gain at the expense of unifying his country and keeping us safe. Unlike the people he governs, our 44th president does not believe in American exceptionalism. Allowed another term, he may just get his wish.