By ValleyPatriot on July 19, 2016Comments Off on Publisher to Hold Rally to Support Police Officers & Their Families 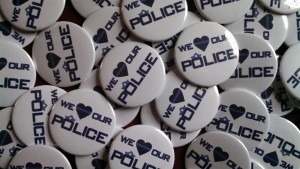 Valley Patriot publisher Tom Duggan has partnered with Methuen Police Chief Joe Solomon to hold a rally in support of police officers and their families next week (July 20th) at the Methuen High School Stadium. (6PM)

Duggan, a 1990 police survivor, says that the epidemic of police executions across the country, and the growing hatred and media libels against law enforcement motivated him to contact Chief Solomon to help organize the event.

“The coming together of the police and those we serve hits at the core of our profession,” Chief Solomon said.

“The rule of law has no meaning without the mutual respect and admiration of each other. Sir Robert Peel said it the best. ‘The police at all times should maintain a relationship with the public that gives reality to the historic tradition that the police are the public and the public are the police’. We look forward to sharing time with our community at the rally.”

“This is a non political event,” Duggan added. “The only politicians who will be allowed to speak will be those who are or have been in law enforcement or police survivors.”

“The media and the politicians continue to incite violence against our police officers by labeling and stereotyping them as a bunch of jack booted thugs looking to gun down black men and take away people’s rights,” Duggan said.

“I’m tired of it. These men and women are heroes who put their lives on the line to protect the public, and it’s time for good people to stand with them and show that we care about their sacrifices! We can’t change how the rest of the country feels about our cops, but we sure as hell can do something at the local level to raise awareness for what these peace officers deal with every day, and that their lives matter!”

Duggan says that he hopes to have a large crowd, “but more importantly I hope people will hear our message and think for themselves when they see the daily blood libels against cops on CNN every single day.”

Police departments in Lawrence, Methuen, Lynn, North Andover and Haverhill will participate, but Solomon and Duggan say they are inviting any and all departments to come as well as members of the public who support law enforcement.

WHERE: Methuen High School
WHEN: Wednesday July 20th at 6PM