By ValleyPatriot on August 29, 2018Comments Off on Rep. José Tosado Embodies State House’s ‘Failure To Protect’ 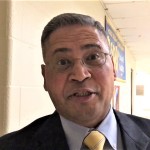 Almost every profession requires a license these days. The promise made by the State for interfering in the people’s right to earn a living is that it would be the watchful guardian protecting the public. Candace Sloan, who was illegally appointed by Charlie Baker to a consecutive third term as state medical board chairperson, is thus compelled to say, “We are passionately committed to public safety!” while throwing patients out on the street.

Bump’s audit found that 25% of complaints were not handled within the required 60 days. These complaints involved “gross negligence, incompetence or substantial violations of regulations” including “people practicing without licenses, unsanitary conditions and fraud.”

Any normal person would find this immediately shocking.

Instead, Rep. José Tosado, member of the Joint Committee on Consumer Protection and Professional Licensure, told Kristin Palpini of the Berkshire Eagle: “We absolutely are aware of the report. If things aren’t fixed, [the joint committee] can call in and hold a hearing; we can talk about the issue and provide direction. At this point, it’s not at that level.”

On July 23, 2018 I emailed Rep. Tosado – “Based on the Berkshire Eagle report pasted in above, you have declared that “allegations of people practicing without licenses, unsanitary conditions and fraud” do not rise to the level where you feel compelled to even hold a hearing, let alone do something useful. Please declare what would rise to the level that compels you to even “hold a hearing” and if that takes people dying at the hands of unlicensed professionals, how many deaths would qualify.”

On July 27, 2018 I followed up with a certified letter. And forwarded that email to Sen. Barbara L’Italien, the head of that Joint Commitee and now running for Congress. The response has been, as Tom Duggan says, “crickets”.

Then again, this is not surprising given the evidence repeatedly before our eyes. The State allowed an African man to retain his passport after he was booked for rape here. He flew out of the country immediately. The State allowed a murder suspect out on bail to remain on bail despite repeatedly violating his bail conditions. That murder suspect then went on to kill a new father the day he was to bring his wife and baby home from the hospital.
The reason these occur repeatedly is because within the State House there is total contempt for the very concept of governance. No state employee is ever haled in even for a hearing, let alone fired for failing to protect the public.

This contempt of course does not originate within the State House.

Representatives and Senators bring that contempt in with them when they assume office. Take our José Tosado for instance. Prior to becoming the state rep for Springfield, he was the Vice-Chair of the Police Commission during the time serial-killer Stewart Weldon collected 68 charges on his rap sheet.

The Springfield Republican reported that Springfield Police did not open a case against Weldon for raping a woman even after Chicopee Police informed them of the results from CODIS of the rape kit that had been collected from the victim at Baystate Hospital and that it matched another Springfield case from 2009. Springfield naturally deny that Chicopee informed them but stay mum about why they did nothing about the 2009 complaint.

It is easy to blame front desk cops. But the Weldon crime spree unerringly points to a total failure of leadership at the very top. If Springfield had taken Weldon off the street for that rape and previous crimes, three women would still be alive now. If Chicopee had cared enough to ensure Springfield knew about the CODIS results, three women would still be alive now.
Because the State House will never hold State employees responsible for failing to protect the public, this situation will repeat. And each time it recurs, the State employee’s alleged “privacy” rights will trump the State’s duty to protect the public.

Similarly, the minute the State coerced professionals to obtain a license to continue earning a living, it took on the non-transferable duty of protecting the public from those who now hold a license. The duty of protection is entirely on the State. It is a duty that comes with charging $600 for a license every two years. It is mandatory. The failure to do so is called ‘Failure to Protect’ and is embodied by everyone in the State House, like José Tosado.

Dr. Bharani practiced neurology in Massachusetts until the state medical board illegally suspended his license in July 2017. scleroplex@gmail.com