By Tom Duggan on April 9, 2015Comments Off on Rick Larrimore’s Rod Stewart Tribute Concert in Lawrence May 2nd 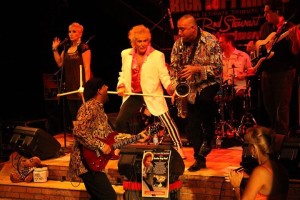 Rick Larrimore grew up outside of Baltimore playing drums and singing professionally since the age of 14, inspired by The Beatles, Led Zeppelin and most notably an early Rod Stewart, when Rod was with Jeff Beck.

“I’d listen to Rod sing ‘Let Me Love You’ with my ear jammed right against one of the speakers so I wouldn’t disturb my mom and sisters,” Larrimore says.

After attending The Berklee College of Music in Boston, Rick never looked back, hitting the rock-n-roll highway, singing and playing drums everywhere. He has shared the stage with countless top national acts while refining that raspy Rod vocal style. Rick naturally credits his vocal style to Rod.

Rick’s uncanny interpretation of Rod Stewart has mesmerized and even fooled so many in his audiences, even to the extreme of audience members shooting entire rolls of film before they learn it’s not the “real” Rod Stewart!

Rick’s other creative pursuits lead him to start “Dreamland Studio” where he records and produces many diverse projects including his personal favorite, gospel music. To date, Rick has edited and aired over 120 gospel radio shows and recorded and produced several CD projects including Andy Pratt, best known for the 1970’s hit, “Avenging Annie”. With the resounding success of a jingle Rick wrote for a Hebrew National salami ad contest that gained national exposure from CNN, The Wall Street Journal, Newsweek and led to a press conference from Carnegie Hall, Rick began writing and recording jingles for radio throughout the New England region. He currently is recording an original CD with an expected release in October, 2018. The CD includes a very early “Rod-like” ditty entitled “Sweet Loretta”, already a hit at Rick’s live shows. In less than three years, the “Ultimate” Tribute to Rod Stewart featuring “Blondes Have More Fun”, his seven piece backup band, Rick has created a major buzz from Las Vegas to Rio de Janeiro! As Rick says, “I invite you to come see for yourself…and accept NO substitutes!!..well, maybe one”!