By Tom Duggan on February 8, 2006Comments Off on Sex Ed Reform

What Does Your Fifth Grader Know About AIDS?

Many parents in North Andover this week are asking themselves these same questions after their children came home with a letter about a fifth grade health initiative with its classes called “growing up” and “staying healthy.”

During these classes, fifth graders will be taught “Information regarding the immune system and communicable diseases, including AIDS, relevant to this age group.”

This flyer was given to school children who put it in their backpacks to bring home to their parents, just like any other notice. Not surprisingly, many students read the flyer before bringing it home.

According to one mother of a Thomson School fifth grader, her 11-year-old daughter came home confused, asking her, “What is AIDS?”

The flyer given out by the North Andover School Department goes on to state “the unit (class) will dispel myths about AIDS, discuss the immune system, and briefly explain how communicable diseases are transmitted.”

The Thomson mother, shocked at reading the flyer, asked The Valley Patriot editors, “What myths does my fifth grader have about AIDS? She does not even know what AIDS is!” 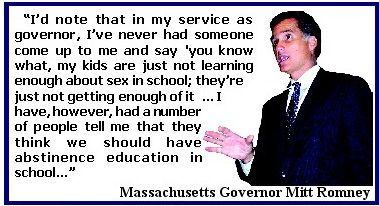 Even more concerning to parents who contacted The Valley Patriot was the connection between AIDS and sex. One mother rhetorically asked, “How can they teach about AIDS and communicable diseases without teaching my kids about sex?”

The flyer then informs parents about the state policy that parents may “opt-out” their children during classes involving human sexual education. To opt-out, the parent needs to write a letter to the principal.

Under current state law, public schools must inform parents when classes involve sex education and give them the choice to have their children opt-out of those classes. The law also gives local control to school committees to decide which grades should receive “health education” and what kind of material can be covered.

But the current law might be changing if the Massachusetts Legislature approves House Bill 1641, which would make health education mandatory, stripping local control from parents and school boards.

Health education, including sex education, would become a required core curriculum subject and would no longer be an option decided by the local community’s school officials.

L’Italien said she supports the bill because she believes the state should mandate such education.

“I believe that Health Education in the schools should be expanded state-wide only if funding is provided to cover the additional cost,” L’Italien told the Valley Patriot.

“The curriculum would have fourteen components to include information about nutrition; physical activity and fitness; the dangers of drugs, alcohol, and smoking; in addition to sex education. Currently there is an opt-out option for parents to the sex-ed part. We need to educate children so they can make responsible decisions to reduce risky behaviors, prevent disease and lead healthy lives,” L’Italien added.

If passed, health education classes, like the one being taught to fifth graders in North Andover, will be regulated by the state and parents may no longer be able to opt-out.

William Kelly, a member of the North Andover School Committee, is opposed to both the Mandatory Health Bill as well as North Andover fifth graders being taught about AIDS.

“I am opposed to the State taking away from local communities the ability to control how or what weteach in regard to health education and in particular sex education, said Kelly. “ This is another example of the State pushing a new initiative down our throats when we are struggling to provide a basic education in the important core areas of math, reading, science and the arts,” he continued. “Furthermore, if there was ever an area where local communities need to have a say in what is taught in our schools this is one of them.”

As to fifth graders being taught about AIDS or any other sexually transmitted disease, Kelly states, “fifth grade is too early and it is inappropriate for this age group. The flu or how to prevent getting a cold or exercise and good nutrition is fine, but not on the dangers of STD’s. I’m not opposed to teaching about the dangers of STD’s with the parental opt-out staying in place to older kids in 8th grade at the earliest, but not fifth graders,” Kelly stated.

The Lawrence and Methuen public schools coincidentally also begin teaching their fifth graders about AIDS and the ways it can be transmitted. 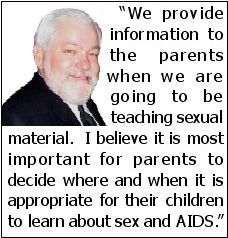 When Superintendent Laboy came to Lawrence, he revamped the health education curriculum throughout the schools, limiting the scope of what youngsters are learning at the early grades. Laboy also refused to allow the radical group “Lawrence Grassroots Initiative” to pass out homosexual literature at Lawrence High School. “Because there was no School Committee policy in place regarding such material being distributed in the schools,” Laboy said, “it clearly falls under the discretion of the superintendent of schools. So I said no.”

Laboy also began enforcing the policy of giving parents the choice to opt-out of any sex education classes. “We provide information to the parents when we are going to be teaching sexual material,” he said. “I believe it is most important for parents to decide where and when it is appropriate for their children to learn about sex and AIDS,” he added.

In Lawrence, AIDS education, including sex education, is touched upon beginning in the fifth grade. The schools get into more detail in the late middle school grades and then more in depth at the high school level. Parents are notified before these classes are taught and any parent who is uncomfortable or objects to a child receiving such education may opt-out at any time.

According to Dr. Maryellen Rancourt, director of curriculum and grantsmanship in Methuen, the transmission of AIDS and hepatitis is taught to fifth graders by discussing blood-to-blood contact and by teaching students such essentials as not to become “blood sisters” with their friends and not to touch someone’s open wound. Rancourt said that students are taught that if a friend is bleeding, to get a teacher or parent immediately and never touch the blood.

“In Methuen, we focus on teaching our students about being safe around other people’s blood,” says Dr. Rancourt. “All of the classes are taught by grade-certified health educators,” she added. “We also discuss hepatitis and tell the children not to pick up needles they might see on a playground.”

Brian Camenker, director of the Article 8 Alliance, opposes H1641 and testified last week before the Education Committee. “If health education becomes a core subject, parents will lose control over what their children are taught when it comes to sexual education,” said Camenker.

“Right now,” he continued “parents can opt-out their children, but if the current bill passes and health is mandated from kindergarten to 12th grade, then parents will lose that right.” Proponents of the bill argue that parents can still opt-out, but Camenker disputed that, asking, “Do you know of any other core subjects, like math, science or history, where parents can remove their children from the classroom?”

Camenker however, supports another bill also before the Education Committee, House Bill 1050. H1050 would make attendance proactive on the part of the parents by allowing them to opt in rather than opt-out of sex education classes.

Lawrence Superintendent Wilfredo Laboy said he supports the opt-in bill as well, saying “the opt-in provision ensures that parents are really informed of the information being taught to their children by requiring expressed permission before the child can attend the classes as opposed to a child “forgetting” to bring the notification home and as a result the child ends up attending those classes.”

“It puts more control in the hands of parents,” says Laboy, “and I support parental input and parental involvement.”

Following the testimony of the mandatory health education bill, Governor Romney issued a statement opposing the bill, saying, “the decision to offer such courses should rest with parents and local school boards.”

“I’d note that in my service as governor, I’ve never had someone come up to me and say: You know what? My kids are just not learning enough about sex in school. They’re just not getting it.” Romney added. “I have, however, had a number of people tell me that they think we should have abstinence education in school…”

Governor Romney is encouraging more schools to teach abstinence-based education and says that there is federal money for such programs.

Currently, parents of fifth graders in North Andover and other school districts like Methuen and Lawrence still have the right to decide whether or not to have their child attend health classes that include AIDS education. Further, local school boards still decided the health curriculum.