By Tom Duggan on December 1, 2017Comments Off on State Declares Lawrence Police Officer Eugene Scanlon Killed in the Line of Duty 45 Years Later

Now, Lawrence has another name to add to the police memorial in Washington D.C., Officer Eugene Scanlon. 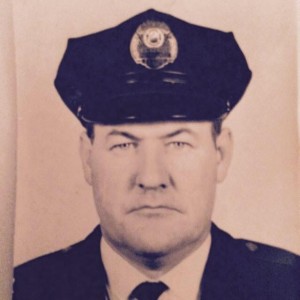 In 1972, Lawrence Police Officer and hero veteran of WWII and Korea, Eugene Scanlon died as the result of injuries he sustained after being savagely beaten by four men in the parking lot of Central Catholic during a high school dance.

This month, the state legislature, through the efforts of Lawrence State Rep Frank Moran, has rectified that injustice as the house and senate voted unanimously to declare Eugene Scanlon’s sacrifice as officially “in the line of duty”.

Governor Charlie Baker is scheduled to sign the bill next week. 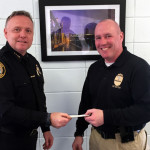 His father will be honored at the Valley Patriot Charity BASH on March 23rd at the Firefighter’s Relief In., as was O’Connor. VIDEO OF O’CONNOR’S LAST CALL

The younger Officer Scanlon says he never knew why his father’s death was not deemed “line of duty” back then, but that he had always wondered about it. Then, he recalls, a chance encounter with an old friend of his fathers set everything in motion.

“It was a fluke really. I was in court with City Attorney Charlie Boddy on a firearms case. I’m the firearms officer for the department so we work on gun cases as he represents the city.

“Attorney Bob Menasian was there, and Bob had tried to help us 45 years ago when my father was first assaulted. He really did a lot for us,” Scanlon recounted.

“Attorney Menasian asked me, how my mom was doing and started talking about my dad’s case. Attorney Boddy was really interested and asked me, so I told him the story.”

“He asked, ‘How is it that nobody knows about this?’”

“Two days later he came to me and said he’d really like to get my dad’s line of duty status changed. I said of course, but I didn’t think anything would come of it. It had been so long, but I said ‘sure’ why not.”

A few months later Attorney Boddy had a resolution drafted for the city council, and in June of 2015 the Lawrence City Council approved a resolution declaring Lawrence Police Officer Eugene Scanlon a line of duty death.

The city held a ceremony at City Hall and because of the efforts of Attorney Boddy, on July 4, 2015 a corner on Mount Vernon Street was dedicated in Officer Scanlon’s name. 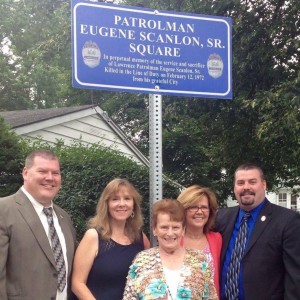 From there Attorney Boddy and the younger Scanlon worked on changing some of the wording from the city council resolution to see if the state legislature would then approve an official declaration that Officer Eugene Scanlon Sr. had died in the line of duty.

“When he called me and told me the story I was all in with both feet. What a terrible tragedy,” Lawrence State Rep. Frank Moran said.

“ I was happy to walk this legislation through the House and lobby for the Scanlon family. This is one of those things that make you feel good about your job. When you can help a family like this, a family that has had to bear horrible hardships because someone they loved made the ultimate sacrifice, it restores your faith in the system a little.”

Officer Scanlon said that he was really glad to see his father recognized while his mom was still alive to see it.

“She’s a strong woman, she’s 86 years old and she still has all her faculties, she’s still pretty sharp and she deserves to see this happen. I was born six months after he died and she didn’t have it easy raising four kids by herself.”

Scanlon said that even though his family was entitled to 45 years of line of duty death benefits, they waived the application for death benefits “because we didn’t want anyone to think that we were doing this for money. Money had nothing to do with any of this. We thought waiving the benefits at the onset would help make this process go through a lot easier, so we had no problem doing that.”

Eugene says he never dreamed his father’s status could even be changed. Now, so many years later, Officer Scanlon says his father’s sacrifice will hopefully be added to the National Law Enforcement Officer’s Memorial in Washington D.C., where the names of every police officer killed in the line of duty has their name etched on a national monument.

Eugen Scanlon is the fourth police officer declared to have died in the line of duty in the City of Lawrence.

The others are: Peter Manning (1954) killed by a drunk driver, Jeremiah O’Connor died of a heart attack, and Thomas Duggan, Sr. (1990) who was bludgeoned with a baseball bat.

The details of Officer Scanlon’s murder will be published in the December, 2017 Valley Patriot.