By Christine Morabito on September 3, 2010Comments Off on Stimulus or Waste? Obama’s Scam Wow 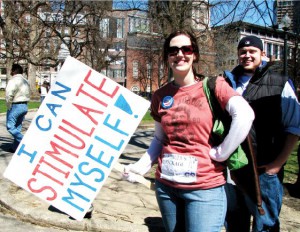 In 1975 Sen. William Proxmire, D-WI, became the taxpayer’s superhero when he began passing out Golden Fleece Awards, spotlighting pork-barrel projects that wasted taxpayer dollars. This infuriated some of his colleagues, who could no longer squander other people’s money with impunity. Examples included: $84,000 to study “why people fall in love,” and $27,000 to determine why inmates want to escape from prison. Turns out, these projects were amateur hour compared with today’s government waste. The late senator’s battle against pork is now being waged by the Tea Party and other conservatives.

18 months ago, President Obama implored us to support his $787 billion stimulus package meant to avert financial disaster. Last week we had 473,000 first time jobless claims, with 4.46 million Americans collecting unemployment benefits. Meanwhile, Obama insists “we are on the right track,” and Vice President Biden boasts “we have turned this economy around.” It’s no wonder Americans are scratching their heads, wondering if the American Recovery and Reinvestment Act has fulfilled its promise. In what parallel universe do 9.5% unemployment, (12.5% and rising in California) and a flatlined economy equal the “Summer of Recovery”?

Let’s explore some of those “reinvestment” projects funded with stimulus dollars, shall we? My personal favorite has to be the $3.4 million awarded to the Florida Department of Transportation, to build fences and tunnels near State Road 63. But these structures are not for people; they’re for turtles, that might otherwise end up as road kill. I love turtles as much as the next gal, but with crippling unemployment, the falling dollar, and a deficit the size of Mother Russia, it’s not the welfare of cold-blooded reptiles that keeps me up at night.

There are wasteful spending projects, and then there are these: $1 million to help smokers quit smoking by giving them Blackberry Smart Phones, $2.6 million to teach Chinese prostitutes to drink responsibly, and $225,238 to study how narwhals use their tusks. You can’t make this stuff up! Or, what about the $400,000 study entitled: “Malt Liquor and Marijuana: Factors in their Concurrent Versus Separate Use”? Conservative author, Stephen F. Hayes opines, “I tend to think that those who concurrently get drunk and high are also far more likely to believe the stimulus is working.” (Reprinted by permission from Imprimis, a publication of Hillsdale College)

I seriously doubt that taxpayers would have chosen to fund these gems of their own free will. Such projects are neither necessary, nor are they considered by most Americans to have any redeeming value. Instead, the government attaches value to things that have no value. Since the government has no money, funds for these projects must be provided by the people through confiscation (sometimes called taxes). But I guess that’s the whole point of excessive taxation—so politicians can funnel money into pet projects and reward donors to their perpetual campaigns. Incumbency means never having to say “we can’t afford it.”

What I find infuriating is that despite their frittering away of our hard earned money, elite politicians preach that “we all have to make sacrifices.” The second we utter a word about massive spending, they slap us down by threatening to cut police, firefighters and teachers. Really? That’s the first thing you cut? I agree with Glenn Beck who says that when average citizens are forced to curb spending, “they don’t shut off the electricity,” but instead cut luxury items like cable and dining out. So, when The Heritage Foundation reports that congressional investigators received $55,000 in federal student loan funding for a fictional college they created to test the Department of Education, it just picks at the scab.

It’s imperative that we elect conservative candidates, committed to spending cuts and limited government. According to Americans for Tax Reform, we spent the first 231 days of 2010 working to pay our debt to the government (eight days later than last year). That means we only get to keep for ourselves the equivalent of what we earn in the final 4½ months of this year. If we continue on this course, and if the Bush tax cuts are allowed to expire, taxation will only become more oppressive. The left’s radical agenda is now clearly defined, its soft underbelly exposed. It’s time we make our elected officials start acting like grownups, because right now we can’t take our eyes off them for a second.

If you’re tired of government pushing you down and taking your lunch money, please join the Tea Party!