By ValleyPatriot on July 3, 2017Comments Off on Store Video Shows Child Striking 11-year-old with a High Chair in Haverhill 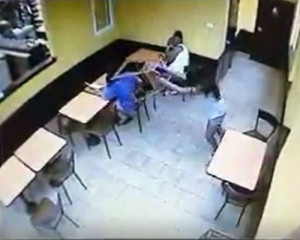 The father of an 11-year-old, distraught over an incident a week ago where his daughter was bullied and assaulted by another child, is seeking justice as well as understanding.

Jason D. Brillon told WHAV his daughter was slapped by a slightly older girl and struck with a piece of furniture at a Bradford doughnut shop. While Haverhill Police have agreed to seek charges against the child in juvenile court, Brillon has widely distributed a store surveillance video showing the assault in hopes of raising awareness.

“In the video, she starts off with slapping my daughter in the face eight times,” he said.

The recording shows his daughter did not fight back during the Monday afternoon incident, but rather repeatedly tried to turn her attention back to a book she was reading. But, Brillon said, that did not deter the assault. The attacker grabbed a chair.

“It was one of the high chairs that toddlers and babies sit in. She aggressively put it against my daughter’s back and head and used a lot of force to hit her head off the table.”

While his daughter was not seriously hurt, he is concerned about the long-term impact of such abuse on children. Brillon said he met with the parents of the abusive child and the girl herself and attempted to describe how emotional harm continues long after physical pain has worn off.

“I tried to explain to her about how, nowadays, kids get bullied and they end up killing themselves because of it.”

When Brillon met with the girl and her parents, he had only seen a short Snapchat video taken by his daughter’s friend. That video ends before the worst of the incident was revealed. The father didn’t initially plan to pursue the matter, but changed his mind Friday after seeing a video provided by the store manager.

“They did apologize. That’s why my daughter didn’t want to file charges, but then I saw the video. Any father or parent for that fact that’s going to see that type of abuse done to their daughter and not do anything. What type of parent would I be if I just forgave that little girl?”

The father first went to the Haverhill Police Station with only the shorter Snapchat video, He was upset when he said he was told the recording didn’t justify charges. He was instead advised to obtain a restraining order. However, when Brillon returned this weekend with the complete store video, police agreed the severity of the assault justified filing charges.

His daughter, who turned 11 just last month, and the other girl time overlapped for a time at Nettle School. A mutual friend tried to bring the girls closer by having a sleepover Sunday night. The next day, the three went to the doughnut shop together.

Brillon, of Salem, N.H., said he works many hours, but always finds time to be with his daughter each day.

“I’m a tow truck driver. I work like 75 hours a week, but I still, every single day, stop in and see my daughter. Every single night before I go home—whether it’s 2, 3, 4 in the morning, I drive by her house and make sure everything is ok.”

The father said he will continue sharing the video on social media and talking with the press.

“My daughter has a huge heart and she can forgive, but I cannot let that slide. As my daughter’s father. As the person that is supposed to be there for her to make sure she’s fine—you know, mental support, physical support—this is my job to make sure my daughter’s safe,” he said.