Super PACs and Outside Groups Report $16.9 Million in Spending to Affect Gubernatorial Finalists

By Tom Duggan on November 6, 2014Comments Off on Super PACs and Outside Groups Report $16.9 Million in Spending to Affect Gubernatorial Finalists

BOSTON – In the first statewide election of the new Independent Expenditure “Super” PAC era, outside groups reported making $16.9 million in independent expenditures to support or oppose the Democratic and Republican gubernatorial finalists.

Independent expenditures made by Super PACs and other groups expressly advocate for the election or defeat of a candidate, but without coordinating with candidates and their campaigns.

Commonwealth Future reported the highest spending total, $9.3 million to support Baker and oppose Coakley.  The committee was funded primarily by the Republican Governors Association, which contributed $9,400,000.

Mass IEPAC reported $6.3 million in expenditures to support Coakley and oppose Baker.  The primary donors to the committee were the Massachusetts Teachers Association IEPAC ($2,539,355), the Democratic Governors Association ($1,394,000), and WOMEN VOTE! ($1,150,000).

In addition to expenditures made by Super PACs, several groups made independent expenditures from their general treasuries – a total of $435,823.  All but $10,000 of that total was made to benefit Coakley.

Super PACs and other groups also made expenditures to support or oppose other statewide and legislative candidates.  A complete study on independent spending will be issued by OCPF at a future date.

Super PACs originated in 2010 after two court decisions.  In the Supreme Court’s Citizens United vs. FEC decision, the court ruled that independent expenditures by corporations that are made to influence candidate elections cannot be limited, because doing so would not be consistent with the First Amendment.  The second court decision, SpeechNow.org vs. FEC, held that individuals, corporations, and other groups can provide funds without limit to independent expenditure-only committees (Super PACs).  This decision was made by the U.S. Court of Appeals in D.C. 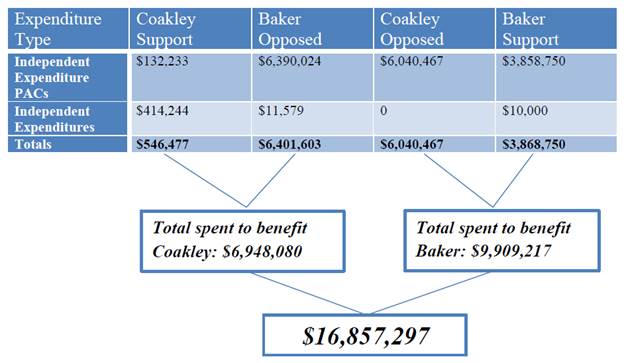 Super PACs and Outside Groups Report $16.9 Million in Spending to Affect Gubernatorial Finalists added by Tom Duggan on November 6, 2014
View all posts by Tom Duggan →