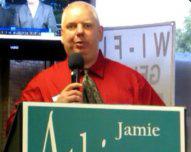 Paying Attention with Tom Duggan, A Review of the BASH and Methuen Politics (March 29, 2013) 980WCAP