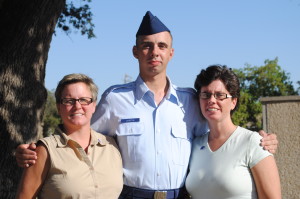 In January of 2012, presidential candidate Rick Santorum said to the people of New Hampshire that children would be better off having a father in prison than being raised by a same sex couple. According to Mr. Santorum a criminal parent is better than a gay one. Others argue that same sex parents confuse children and may cause gender disorders, yet there is no evidence to back up this claim. I was raised by heterosexual parents and grew up a lesbian. Actually, I was born a lesbian. Every gay, lesbian, bisexual and transgendered person I have ever met grew up with heterosexual parents or parent. I don’t see how same sex parents could influence their child’s sexuality when all of those hetero parents did not.

Many people opposed to same sex parents say that children need a father and a mother unless of course, according to Mr. Santorum, one is in prison. Apparently that would be just fine. A recent census has revealed that one-third of American children live without one parent or another. To break it down further, 15 million children live without a father and another 5 million without a mother. That is a staggering amount of single parent homes in the U.S. I’m willing to bank on the fact that not all of these single parents are all gay or all straight.

I digress. The issue is what are the benefits of same sex parenting. I’m sure many of you are thinking – none. Let’s see. Fifty percent of heterosexual parents have unplanned children. That means that half of all children born to heterosexual couples were not planned or wanted. They may have been wanted some time in the future, but not at the moment they were conceived. This does not happen with same sex couples. Either through adoption, surrogate pregnancy, or invitro-fertilization, all gay/lesbian parents planned for and wanted the child or children they acquired together. As a result of this, studies have shown that same sex parents are more invested in their children’s lives and upbringing. Same sex parents appear to take a more hands-on approach in their children’s lives than do the majority of hetero parents. Isn’t that what parenting is all about?

Furthermore, there are many who would argue that same sex parenting is detrimental to a child’s overall mental and emotional health. Studies have shown that there is absolutely no evidence to prove this. In fact, they’ve shown that there is no difference in the physical, mental, or emotional health between children of heterosexual parents and children of same sex parents. Experts say that same sex parents are more likely to expose their children to more diverse interests than heterosexual parents. I know my wife and I never placed preconceived ideals on our three children. We brought them to science museums, art museums, the beach, the mountains, cookouts with 99% heterosexual couples and cookouts with 99% same sex couples. If our son wanted a doll and our daughter a truck, there was no balking as to whether or not to allow it. We never steered away from any subject matter that our children were interested in because it made us uncomfortable and never hid them from all the world had to offer. The result is that we have three hard working, well-adjusted, heterosexual children who are adding to the greater good of society. Our oldest is working on her masters in social work. She inspires to work with children who have a long-term illness. Our middle child is an airman specializing in munitions. And our youngest works with children at a boys and girls club and, when Market Basket gets their act together, he’ll continue being trained as a butcher.

The fact is, there is no difference between hetero or homosexual parents. Whether we find ourselves being parents accidentally or by choice we, hopefully, invest ourselves to our fullest extent, love our children without reservation and unconditionally, and place no judgment or preconceived ideas on what they should be other than good people. We really need to stop thinking about what the best parent looks like and start concentrating on being the best parent we can. Ones sexuality has nothing to do with raising children.