By Tom Duggan on August 25, 2005Comments Off on The Lawrence City Council, When Privilege is Better Than Pay 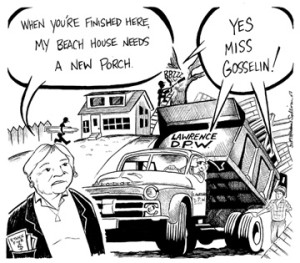 Lawrence City Councilor Marie Gosselin is always complaining about the “measly $97 a week” she gets paid for being a City Councilor. And she is right, of course. Lawrence School Committee members and City Councilors should be paid more for the amount of work and time expected of them to do a good job. But Gosselin is making up for the lack of pay another way. How? Be receiving free city services.

Last Thursday morning, one of my news spotters in city hall called me to say I should get to the corner of Shattuck and Rowe Streets, so I could see for myself what was going on. That’s the house Marie Gosselin owns right there on the corner as you take a left coming from South Broadway. Being only a few blocks from the house, I rushed down to Shattuck and Rowe to see city workers cleaning up construction material from her property.

You see, the city is not suppose to pick up construction material. The city will pick up your trash through BFI, and they will even pick up bulk items like a refrigerator or a couch. But for construction material you have to get a permit to dump such substances, or hire someone to take it away. But that’s you. Marie Gosselin doesn’t have to do that. She’s a member of the Lawrence City Council. A position which leaves her with the belief that she deserves special privileges not afforded to everyone else in Lawrence. And hey, as long as you are doing the mayors bidding on the city council who is going to stop you, right?

So, I called the city yard and talked with a few of the workers later in the day to find out the story behind these illegal services being provided for one of our councilors.

“It works like this Tommy,” one of the laborers told me, “we get calls from her all the time saying she doesn’t want any special privileges just because she is a councilor, and then it’s always followed with her special request. This week it was construction material. Two years ago, we had to go to her house and cut down a tree on her property because she didn’t want to pay for tree removal. All she had to do was call the mayor and say she was donating the tree for Christmas time, and the next thing you know she is on the front page of the Tribune putting a star on the Christmas tree at the fountain. I bet the people of Lawrence have no idea how much money we paid in man hours for that tree.”

Here’s what’s funny about this story. She can’t deny it because too many city workers are on record saying they were involved. She doesn’t see anything wrong with it, because she continues to do it …and … it will probably happen again.

“She always mentions that she ‘talked’ to the mayor about whatever her special request is and there aren’t a whole lot of city workers who want to get on the mayors bad side, so we do what we can to keep our jobs,” another worker told me.

So, the next time you hear Councilor Gosselin crying about how little she makes as a councilor and how hard she works, tell her you just renovated a few rooms and you want her to make some phone calls so that you don’t have to pay to have the material removed.

The next time she pats herself on the back for all that hard work she does ask her how much money in free services she is receiving as compensation on top of that “measly” check for $97 dollars a week she always complains about getting. And, the next time you hear her talk about abuse of city services or making sure all the money in city coffers is going where it is suppose to go…ask Councilor Gosselin when she is going to start practicing what she preaches.

The Lawrence City Council, When Privilege is Better Than Pay added by Tom Duggan on August 25, 2005
View all posts by Tom Duggan →