By Christine Morabito on August 8, 2012Comments Off on The Tea Party on Trial, Again 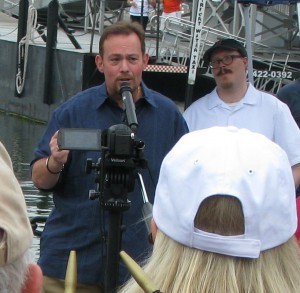 With predictable swiftness, the mainstream media rushed to blame the Tea Party following the movie theater murders in Aurora, Colorado. This time the stone was cast by ABC news correspondent Brian Ross, who apparently slept through his journalism class on libel law.

When their researchers conducted an online search of James Holmes, the 24-year old alleged assassin, and found a Tea Party member by the same name, the folks at ABC must have been ecstatic.

Far from a rookie mistake, Ross is an experienced investigative reporter and should have known better. He even stated during his broadcast “Now, we don’t know if this is the same Jim Holmes.” A little voice inside his head should have shouted, “Well then don’t report it!”

Perhaps we should not have been surprised. From the very beginning the mainstream media has been treating the Tea Party like a baby treats a diaper.

For a striking comparison, consider how the liberal media covered the Nation of Islam’s “Million Man March” in 1995. According to Media Research Center, the protest was featured in 21 evening news stories on the night of the march – more than the Tea Party received in all of 2009. In fact, when the Tea Party marched in Washington, D.C., with well over a million people, the media barely took notice. Refusing to report actual numbers, one news outlet printed that “scores “of people attended the rally.

That is when the aforementioned media evolved from dismissing the Tea Party to demonizing it. On CBS, Face the Nation, Bob Schieffer referred to the movement as “angry” and “nasty,” later accusing them of hurling “racial epithets” and “sexual slurs.”

Brian Williams of NBC piled on, implying that the Tea Party was racist. Andrew Breitbart – may he rest in peace – offered a sizable reward to anyone possessing evidence of the alleged racial incident Schieffer was referring to, where aides of Democratic Congressman John Lewis claimed their employer was verbally abused. Here is Breitbart proposal:  “I am offering $10,000 of my own money to provide hard evidence that the N- word was hurled at [Lewis] not 15 times, as his colleague reported, but just once. Surely one of those two cameras wielded by members of his entourage will prove his point.” Not surprisingly, no one ever did.

That the Tea Party has become a powerful political force is undeniable. Yet the liberal media’s pathological obsession with slandering the movement has caused them to embarrass themselves with annoying frequency, and forced viewers to flee to more objective sources for information.

Embarrassing themselves is one thing. But this time, a person’s good name was irreparably damaged. It should not have been difficult to determine that Colorado Tea Party member, James Holmes was a 52-year-old Hispanic male, not even close to the alleged shooter’s description. His  crime was being a member of the Tea Party. The false identification has resulted in him receiving death threats and having to disconnect his phone. Where does “the other James Holmes” go to get his reputation back?

Sure, Ross and ABC apologized, but the damage was already done. Viewers have short attention spans. Many who heard Ross link the suspected killer to the Tea Party will never follow-up. They will never research the story to discover the erroneous connection and that this was a blatant case of media malpractice.

The media displayed the same irresponsible, knee-jerk behavior following the shooting of former Congresswoman Gabrielle Giffords and the crashing of a plane into the Austin IRS building, wildly speculating that both incidents must have been done by people who had an ax to grind with the government, i.e., the Tea Party.

To date there has never been an incident of Tea Party violence, unless you count violence done toward  Tea Party members, and clearly the mainstream media does not count that.

We have few expectations of the media, but we do ask that they keep their hurtful and ideological speculation to themselves and concentrate on objectively reporting the news.

Funny how the Tea Party gets showered with attention from liberals when they can demonize us or speculate about what we might do. Yet they ignore us when it comes to covering the tireless, peaceful, grassroots efforts we are making to save this country.

And, make no mistake, we will save this country.