By Tom Duggan on April 10, 2014Comments Off on Three Alarm Inferno Keeps Firefighters from Four Communities Busy Through Early Morning

Firefighters from Lawrence, Andover, North Andover and Lowell have been battling a three alarm blaze at 118 Olive Avenue in Lawrence for more than four hours.

Olive Avenue is at the top of Tower Hill which made it very difficult for firefighters to get water pressure onto the inferno that displaced at least six people in the late hours of Wednesday night and early into Thursday morning.

Firefighters reported an explosion on the first floor of the building just minutes after arriving and being warned that multiple oxygen tanks were present inside the home. Within a few minutes firefighters were ordered off the roof of the building and those inside to evacuate immediately. 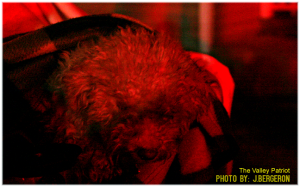 One dog and two cats could not be saved. One witness told The Valley Patriot that they saw one person jump onto the second floor porch roof after the fire broke out. Firefighters from Dracut, Salem, NH., Haverhill and North Reading provided fire coverage at Lawrence stations throughout the night.

Heal Lawrence is a volunteer organization that helps displaced families. Item or financial donations for those displaced from the fire should go through Heal Lawrence.