By Tom Duggan on November 2, 2014Comments Off on Tom Duggan’s Election Notebook – Understanding the Ballot Questions, Bi-partisanship and Why You Should Vote

If you do not vote you are part of the problem.

Why It’s Important to Vote

Recently I interviewed the head of the Election Department in Lowell. She told me that Lowell has about 100,000 people but only 50% of them are registered to vote. That means 50,000 people were able to vote in the September primary election. Yet only 13% of that 50,000 people showed up to vote on election day which is about 7,500 people. When you consider that a large number of those people (at best 49%) voted for the losing candidates, that means approximately 3,675 Lowell residents chose who moves on to the final election. That means 3.6% of the people in Lowell decided who represents the 100,000 people who live there. Because so few people participate in the voting process, those who do participate have far more of a say as to who represents our government and the decisions our government officials make.

One of the things candidates for officials pay attention to is the number of voters who take a ballot and leave it blank. The number of blanks a candidate gets can show strength or weakness in future elections depending on a few factors. A candidate who runs unopposed and gets a large number of blanks shows the un-favorability rating of that candidate. A high number of blanks in races where there is more than one candidate can show a few things. It could show that voters are angry about the negativity or apathy shown by the candidates in that particular race. It could also show that the candidates in that race didn’t do a good enough job promoting the seat they were running for. In some cases a high blank total in a multiple candidate race can happen when voter confusion causes them to vote for more than one candidate (in a vote for one) or too many candidates (in a vote for two or three). If too many names are checked on any given ballot race it is counted as a blank vote in that race.

While a high blank count in races that are at the bottom of the ballot (like Register of Deeds or Register of Probate) are highly expected, when there is a high blank total in races like congress or governor, the message of voter discontent seems to ring a little louder in the halls of power.

If you don’t like the candidates in a particular race leave it blank. If you don’t want to vote because you don’t like ANYONE running for any office you should go down to the polls on election day anyway, take a ballot, and turn in your entire ballot blank. If enough people did this it would lead to change. Don’t underestimate the power of your vote, even if you don’t vote for anybody. 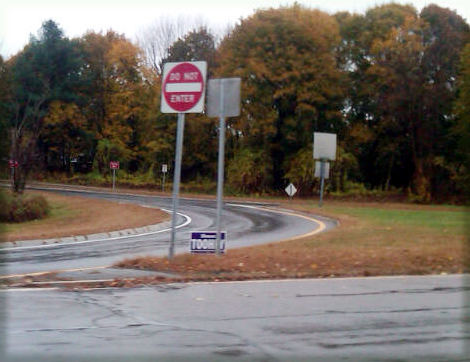 Election laws in Massachusetts say that candidates for public office are not allowed to put campaign signs on public property, abandoned buildings, telephone poles, etc. Yet, every year candidates for office try to cheat to get elected by advertising their message on municipal or state property, or in some other way breaking the law. As small of an issue as it may be, candidates who do not respect the very lenient state election laws (laws that are rarely enforced) show a foundational disrespect for the law, not to mention what it says about their sense of fairness. This election season The Valley Patriot travelled around the The Valley in search of candidate scofflaws seeking to get an unfair edge on their opponents. Most violations of the state election laws regarding signs took place in the primary election in September. For candidates who have never run before, they may be unfamiliar with the election laws, and when called on it, take them down immediately. Others who have run before have no excuse. In the September primary most of the illegal election signs we found belonged to Pavel Payano (candidate for State Senate),  Phil Decologero (candidate for State Representative), and Shaun Toohey (candidate for State Senate). The total number of illegal signs we found a few days before the primary election was 28. As of Sunday November 2nd, the number of illegal signs is more than triple that of the primary with more than 2/3 of those signs belonging to state senate candidate Shawn Toohey.

Question #2: The Bottle Bill. Massachusetts wants to add bottle deposits on drinks that do not require a deposit right now such as juice, sports drinks, etc. Voting YES on Question #2 would approve an extension of the bottle bill. Voting NO on Question #2 means you do not want to extend the current bottle deposit requirements to juices and other beverages.

While Republican candidate for governor Charlie Baker is running away with overwhelming endorsements from Democrat elected officials in Massachusetts, local state Senator Kathleen O’Connor Ives seem to be the Democrat who is receiving the largest amount of bipartisan support. Senator Ives recently received the endorsement of former Haverhill Republican City Committee President Jack Roy, who said that despite being from different parties, Senator Ives is the best person for the job. “I don’t agree with Senator Ives on every issue but as a Haverhill resident I know she is working hard to bring in money for Haverhill.” Roy isn’t the only prominent Haverhill pol who crossed party lines this year to support Senator Ives, her former rival for state senate Paul Magliocchetti also endorsed Ives. Magliocchetti’s endorsement was a double punch for Ives as he sits on the Haverhill School Committee with Ives’ opponent in this race Shawn Toohey the Republican.

As a voter, the best thing you can do to help clean up the cesspool of the election process is to vote against candidates who play dirty and go negative. If candidates cannot get your vote by telling you about what they will do and how they will perform as a public servant they shouldn’t even be running.

Tom Duggan’s Election Notebook – Understanding the Ballot Questions, Bi-partisanship and Why You Should Vote added by Tom Duggan on November 2, 2014
View all posts by Tom Duggan →