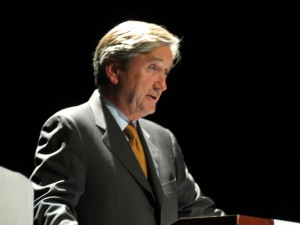 BOSTON PRESS FAKES POLL NUMBERS IN TIERNEY RACE
I declare shenanigans! Before the September 9th primary elections in MA the Boston Globe and the Boston media was so desperate to inflate congressional candidate Seth Moulten’s numbers against John Tierney that they released a bogus poll a week before the election showing Tierney at 47% and Seth Moulten at 44% with a margin of error of +/- 4%.
Those numbers were obviously bogus at the time because this wasn’t a two man race; it was a four man race with Marisa DeFranco polling between 6-8% in polls conducted which included all the candidates. Then, the same Boston media which conducted the fake poll, reported on their own poll which did, in effect, bolster Moulton’s numbers on Election Day helping him to defeat Tierney.
This is how the press manipulates voters in the final weeks of an election and they shouldn’t be able to get away with it. But with all the news media in Boston drinking the same Kool-Aid I guess The Valley Patriot is going to be the only news outlet to call them on it.

DIZOGLIO’S BIG WIN – State Rep. Diana DiZoglio fended off two challengers in the September primary election this month when she defeated hero Veteran Oscar Camargo and the insiders’ hand-picked candidate Phil DeCologero. DiZoglio not only blew out her opponents, but she did so with Lawrence Mayor Dan Rivera and Methuen Mayor Steve Zanni endorsing one of her opponents. In Methuen, DiZoglio defeated DeCologero 7-1 despite Mayor Zanni’s impotent endorsement of Phil. Now, Zanni is behind the 8-ball as he is up for reelection next year with a sitting State Rep. and all her supporters really unhappy about Zanni’s efforts to unseat her. In Lawrence, DiZoglio also defeated DeCologero with an overwhelming margin and in North Andover (DeCologero’s home town), DiZoglio only lost to DeCologero by about 600 votes. 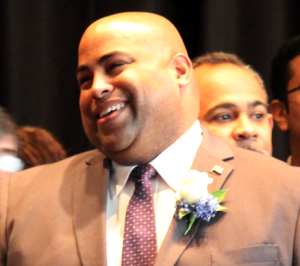 SPEAKING OF DAN RIVERA … Election results in Lawrence show that Mayor Dan Rivera’s endorsement means almost as little as Steve Zanni’s endorsements in Methuen. Rivera endorsed Steve Grossman (who lost to Coakley more than 2-1 in Lawrence). He endorsed Warren Tolman for Attorney General (who lost to Maura Healey but barely won in Lawrence (51%-48%), he endorsed Phil DeCologero (who lost to DIZoglio in Lawrence 68%-17%). Maybe Dan should focus on running the city of Lawrence instead of trying to be like Willie Lantigua and playing king-maker in other elections. In my humble opinion, he should have stayed out of all those races and concentrated on saving his own skin from Willie Lantigua who is sure to win the rep race in Lawrence this November now that he has recruited Roger Twomey to split the South Lawrence vote and take votes away from Marcos Devers.

LILLY WHITE LIBERALS IN ANDOVER VOTE FOR LILLY WHITE BABS L’ITALIEN – So, all we hear from the Democrat Party is that they “celebrate diversity” and they are the party that “advocates for minorities” and that one must BE a minority to represent minorities. Yet the lilly-white liberals in Andover had ONE chance to support the ultimate minority, Doris Rodriguez who is a Hispanic woman, over Hispanic man Pavel Payano, and lily-white liberal Barbara L’Italien. Who did the lily-white liberals vote for in the September 9th primary? Why Babs L’Italien of course. This proves once again that Democrat voters talk a good game when it comes to having minority representation in the Senate or other elected offices but they do not walk the walk when given the chance to vote for what they laughingly say they care most about. Very telling.

FOR GOVERNOR ITS COAKLEY vs. BAKER – If ever there was a chance for Republicans to capture the governor’s office, this is the year. After Charlie Baker destroyed Mark Fisher for the GOP nomination and Martha Coaley soundly defeating Steve Grossman, it’s going to be a matchup between the liberal Baker and the “It’s not illegal to be illegal” Martha Coakley. If Baker gets aggressive on illegal immigration, supports secure communities and goes after Coakley for giving a free pass to former Lawrence Mayor Willie Lantigua for years while she was attorney General, he has a decent chance. The question is, will he run another feel good, happy go lucky campaign, or will he take it to Coakley? This race is Baker’s to lose.

A VERY LOW TURNOUT – How disgusting it is that so few people voted in the September primary elections? In Lawrence 14% of the registered voters turned out. That’s 4,467 people participating in a city of more than 80,000 people. In North Andover and Methuen it wasn’t much better. If you want to know why our government is so screwed up, why illegal aliens have more rights than American citizens, why corruption, fraud, waste and abuse are so rampant in every level of government take a look at those numbers again. They show the exact reason why this country is falling apart. As fewer and fewer people participate in government elections, more and more power is concentrated into the hands of fewer and fewer people. Anyone who didn’t vote on Sept. 9th should be ashamed of themselves. Let’s see a higher turnout for November as the people running for office will be in charge of our government for the next 2-4 years and their level of performance will affect our daily lives. PAY ATTENTION! Read up on the candidates, talk to your friends, and get your asses out to vote. Most people around the world do not have that right, for us to take it for granted is giving away our freedom. 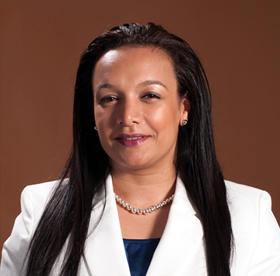 WE THOUGHT SHE WAS DIFFERENT – Doris Rodriguez ran for State Senate against L’Italien and Pavel Payano with a very different message: lowering taxes and fiscal accountability. We had high hopes for Doris especially after she bucked her own party platform to fight for what she believed was right. “I’m for the people” she said in an interview on 980WCAP. But, upon being defeated, Rodriguez turned her back on “the people” and her fiscally conservative morals to endorse the most liberal, pro-taxes, pro-spending candidate in the state, Barbara L’Italien. So now Doris Rodriguez is “for the party” not “for the people” and we find that very disappointing. Of course we know why she did it, it was selfishness. “Im a Democrat” Rodriquez told us after the endorsement. After all, if she wants to politically benefit in the future she will have to tow the line and sell her soul to the Democrat party and support the Democrat nominee.

But again, we thought Doris was different. Her platform of lower taxes makes her much more in line with republican Alex Vispoli. If she cared more about her “people” and her values she would have endorsed Vispoli and taken the political hit showing she really IS “for the people”. Sadly, her platform and her values were less important than climbing the political ladder and bowing down to the party bosses and kissing their ring for future support. It’s not that surprising given the current political climate I guess, it’s just a huge disappointment. We thought Doris was different. She isn’t. 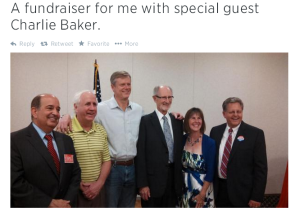 TWOMEY’S MISLEADING SOCIAL MEDIA POSTS CLAIMING OTHER CANDIDIATES “AT A FUNDRAISER FOR ME”
A social media post by Republican Lawrence City Councilor Roger Twomey is causing controversy after Twomey mislead his supporters to believe that the photo he posted on a social media site Twitter was at a fundraiser for himself.
Twomey (R) is in a three-way race with former Lawrence Mayor William Lantigua (I), and incumbent State Rep. Marcos Devers (D) in November.

Democrats and Republicans alike called the Valley Patriot offices Sunday asking why State Rep. Jim Lyons (R) and Andover Selectman Alex Vispoli (R, Candidate for Senate) would be supporting fellow Republican Roger Twomey when Twomey is said to be in the State Rep. race in Lawrence to help his longtime ally Willie Lantigua to regain his seat in the legislature.
“I was at a joint event with all the Republican candidates, I was not at a Roger Twomey fundraiser,” Andover Selectman and candidate for State Senate, Alex Vispoli said. “I was there to promote my own campaign as I’m sure everyone else in the room was. It was a great event.”

A letter sent to all Republican candidates in the area was obtained by the Valley Patriot early Sunday night showing that an event was held at Lenzies Function Hall in Dracut for all republican candidates for state office in The Merrimack Valley.
The letter makes it clear that the event is not a Roger Twomey fundraiser and states that because Charlie Baker could not fit all their individual fundraisers into his schedule, holding one event for multiple candidates would give each candidate a chance to raise money and network with other campaigns. 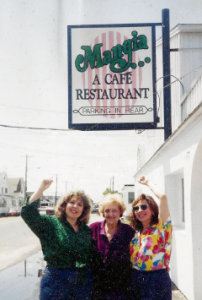 SALISBURY, TOMASELLI SISTERS – It has been one year since the Valley Patriot published the Town of Salisbury’s $80 Million Lie: Sisters Discover Sewer Project 100% Paid for with Grant Money. The story is about the Tomaselli sisters who have been fighting the town over what they say is a fake sewer betterment in 1992. One year later, the Town of Salisbury is still trying to take their home.

Since writing our initial story the Salisbury Town Manager Neil Harrington made a public speech vilifying the Valley Patriot (and of course we published every word of it). He claimed to have proof that the Tomaselli sisters had not paid their taxes (we have evidence they have).He claimed that the Valley Patriot story we initially wrote was “full of falsehoods” and distortions. Yet here we are a full year later and Mr. Harrington has yet to produce one document to prove our story was untrue, or that the Tomasellis “never paid their taxes”.

We even sat down with the embattled town manager last month to discuss a public records request that he tried to charge us more than $500. During that meeting Mr. Harrington assured myself and a colleague that he was going to turn over public documents that we had been requesting for months.

As of the minute we went to print the Town of Salisbury, and in particular Neil Harrington, has not only failed to produce one piece of paper validating any of his public claims about our story. He and the town have failed to turn over public records in violation of MGL Ch 66.

We eagerly await the documents showing how much the multiple Tomaselli lawsuits have cost the town under the management of Mr. Harrington. We believe our readers should always know how much of their tax money is spent on such endeavors.
The Tomasellis were recently on a local television show called Activate Worcester. This Activate Worcester show host Ron Motta interviewed the Tomasellis on Cable TV where they explained the Town of Salisbury’s $80 Million Lie to the Courts and that attorneys in MA and 38 other states can lie to the judges in Court with absolute immunity. The Tomasellis ask people to contact their legislators to initiate and pass a bill to stop granting absolute immunity to attorneys who intentionally deceive the judges in Massachusetts courts. To view the show visit archive.org/details/ACTIVATEWORCESTER90