By Dr. Charles Ormsby on December 8, 2004Comments Off on Valley Patriot of the Month, George Henderson – A Hero in Our Midst 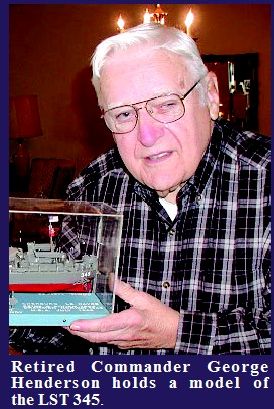 Meeting North Andover resident George Henderson for the first time, you wouldn’t guess what he did during his first three years after college. Born in 1921, he graduated from St. Michaels College in 1942, approximately six months after Pearl Harbor.

George immediately signed up for duty in the Navy and, after being transformed into a “90-day wonder”, he was assigned to the Naval amphibious forces; more precisely, he was assigned to serve on Landing Ship Tank 345 (LST 345). Given the option of choosing a specialty in Supply, Communications, or Gunnery, George picked Gunnery … “because it seemed more glamorous!”

LST 345 departed US shores for northern Africa on May 1, 1943. George downplays the crossing, but consider the circumstances. LST convoys averaged 5-6 knots (under 7 mph) and the North Atlantic was still plagued by numerous German U-boats. If hit by a German torpedo, an LST would rapidly sink and other ships in the convoy were under orders to “just keep steaming” … any ship that stayed behind to pick up survivors would also be sunk. There would be no rescue.

LST 345’s service in WWII was divided into three phases: Support of Allied Operations in Northern Africa (immediately after the fall of Axis forces in May 1943), support for the invasions of Sicily (July 1943) and Salerno (September 1943), and support of the D-Day invasion of Normandy (June 1944) and subsequent Allied Operations in Northern Europe. For LSTs, supporting an invasion meant going right up to the beach under fire to unload supplies and then take Allied wounded (or enemy prisoners) back to the staging area.

While operating out of Bizerte, Tunisia, LST 345 was exposed to German air raids every night for three months. George recalled one such air raid during a Bob Hope concert. Hope and his staff quickly retired to a dark hiding place until the raid was over. When the lights went on, Hope’s troupe discovered they were hunkered down in an ammo dump!

Prior to the invasion of Sicily, military planners estimated casualties would reach 75-80%. But sometimes, good fortune intervenes. A barrage balloon tethered to LST 345 during the invasion at Sicily (that George had been unable to cut away when ordered to do so during the crossing of the Med) probably saved LST 345, George, and its crew. At the last second, a German FW190 fighter swerved to miss the balloon (which was tethered approximately 300 feet above the ship). That swerve sent a 500lb bomb, which would have landed in George’s lap (he was standing on the bridge), into the water next to the ship. The explosion was still close enough to wound four crewmen. 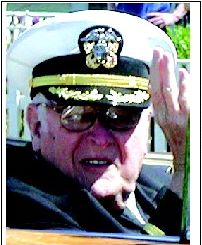 The number of exciting events during these momentous months is too numerous to tell. Here is just a small sampling: * George and LST 345 were mistakenly ordered to sail into Salerno harbor while it was still firmly occupied by the Germans. Being the last ship to receive the order to “get out!”, they were exposed to 88 mm shells raining in from all directions. Only a smoke-screen laid down by HMS Tartar probably saved their lives.

* Sailing to Britain from the Mediterranean, LST 345 encountered a Nazi Wolfpack in the Atlantic. The ship was fortunate to survive as their escorts sunk 5 German subs. LST 345 then hit a storm in the Bay of Biscay where 40-foot waves nearly tore the ship apart.

* George and LST 345 were at Gold beach on the morning of June 6, 1944 unloading men, tanks, and supplies (see photo). LST 345 was the first ship to return to Britain with wounded Allied soldiers.

* LST 345 made 56 trips between Britain and France in support of the Allied offensive in Europe. Some of these trips extended well in-land (up the Seine River) and provided critically needed supplies for our troops engaged in the month-long Battle of the Bulge.

* On one trip, LST 345 carried rail cars in its hold. When they broke loose during a storm, the rail cars threatened to punch holes in the ship and sink it. George and his men crawled under the run-away cars and, with split second timing, forced wedges behind their wheels to prevent a disaster.

One chapter in George’s history, thankfully, is missing. Upon returning to New York in July 1945, after Germany had surrendered, George Henderson was assigned to be the commanding officer of an LSM-R [Landing Ship Medium – Rockets] to be used in the invasion of Japan, scheduled for November 1, 1945. His role would be to sail in close to a selected invasion beach (before the actual invasion) and bombard the shore. Research conducted after the war (see Book Keepers Corner) indicated that the planned mission was likely to be suicidal. Hiroshima and Nagasaki intervened (thank you, Einstein and Truman) and, fortunately, George is still with us today.

George was awarded, among others, The American Defense Medal, The Victory Medal, and The European, Middle East, and African Campaign Medal with four stars (signifying the invasions of North Africa, Sicily, Italy, and Normandy). The Captain of LST 345 was awarded the Bronze Star on behalf of all of the Officers and crew of the ship for their heroism.

George, thank you for your service. P.S. If you are ever fortunate enough to meet George, ask him about the Top Secret Invasion Plans for Sicily that were mistakenly dropped overboard and, to this day, are resting somewhere on the bottom of the Mediterranean!