By Tom Duggan on May 6, 2010Comments Off on Valley Patriot of the Month: Tech. Sgt. Donald G. Boulette

LOWELL – Technical Sergeant Boulette was born in Lowell, Massachusetts. He was raised in the town of Billerica, Massachusetts, where he attended Billerica Memorial High School, graduating in 1995. Boulette entered the Marine Corps on 12 June 1995.

He went to Recruit Training at Parris Island, South Carolina and was assigned to Fox Company, 2nd Recruit Training Battalion. During his training he distinguished himself as Series High Shooter, achieving the second highest rifle score out of a company of 593 recruits.

Upon completion of recruit training, Boulette completed Marine Combat Training at Camp Geiger North Carolina, and was then assigned to attend the Marine Corps Small Arms Repair Course, held at United State Army Ordnance Center and School, Aberdeen Proving Grounds, Aberdeen, Maryland. Boulette finished first in his class and was meritoriously promoted to the rank of Lance Corporal in January 1996.

Boulette reported for duty with Ordnance Maintenance Contact Team –1, Lawrence, Massachusetts in January 1996 where he served as a small arms repairman. He was promoted to Corporal in October 1996.

In July 1997, Boulette was selected to be a member of Marine Security Detachment, USS Constitution, during OPSAIL 200 and the events commemorating the ship’s 200th birthday. During this time he was involved in the day to day security functions required to protect this national treasure, and was aboard the ship when it sailed under its own power for the first time in 116 years.

In January 1998 Boulette was promoted to the rank of Sergeant. In March of that year he trained with the Norwegian military and other members of NATO, above the Arctic Circle at Camp Osmarka, Norway, in support of Operation Strong Resolve ’98.

In July 1999 Boulette completed the Sergeant’s Course held at Camp Crowder, Missouri. Also during this time he began serving as a Squad Leader, and later Platoon Sergeant for second platoon of Ordnance Contact Team –1. He also performed duties as the Armory NCOIC, and Unit Training NCO.

In June 2002 Boulette was hired by the Billerica (MA) Police Department. He attended the 8th Massachusetts Police Officers Course, held at Massachusetts National Guard Base, Camp Curtis Guild, Reading, Massachusetts. He served as Platoon Leader throughout the duration of the 22-week course, supervising 35 other student police officers. He now serves as a Patrolman for the Billerica Police Department and is the Master-at-Arms of the department Honor Guard. He has been credited with three separate life saving actions.

In June 2003 Boulette was promoted Staff Sergeant (E-6). The following month he completed the Staff NCO Academy held at Camp Crowder, Missouri where he was named to the Commanding General’s Honor Roll for completing the course with a 95.55% cumulative average.

On January 5, 2004, SSgt Boulette was called to active duty in support of Operation Iraqi Freedom – II. He was assigned to I Marine Expeditionary Force, 1st Force Service Support Group, Combat Service Support Battalion – 1, Combat Service Support Company – 121. After completing pre-deployment training in Camp Pendleton, CA, Boulette deployed to the Iraqi theater of operations in Feb 04 and served at Camp Fallujah until Oct 04. While at Camp Fallujah Boulette served as the Senior Small Arms Repairman for the Infantry Weapon Repair Shop, he was the Platoon Sergeant and Training NCO for Ordnance Platoon, he also served as the SNCOIC of the company area guard. 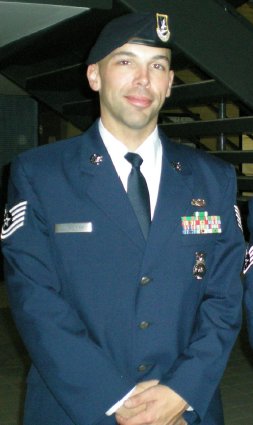 In May 2006 Boulette served as Primary Marksmanship Instructor and Range SNOIC during OCT-1’s annual rifle and pistol qualifications. Under his tutelage, the unit achieved 100% qualification. In August of 2006 Boulette traveled to Omaha, Nebraska to serve as PMI/CMT for Engineer Maintenance Company’s annual rifle qualification. In just five days, despite inadequate range operations equipment, and severe weather conditions Eng Maint Co achieved a 99% percent qualification rate out of 202 shooters. For his efforts Boulette received a Certificate of Commendation.

Boulette last served as the SNOIC of the Infantry Weapon Repair Section of Ordnance Contact Team One, Devens, MA and was the unit’s Primary Marksmanship Instructor. He has voluntarily participated in 89 military funerals honors details in his career. He was Honorably Discharged from the United States Marine Corps on 5 Oct 2006.

Boulette completed the Security Forces Apprentice Course in Dec 2009. He was the class Honor Graduate and received school’s highest achievement award, the Sgt Louis H. Fischer Award. This award is given to students who complete the course with a 97% or higher average and who fire expert with both the M9 pistol and the M4 Carbine. Of the over 5000 students who complete the Security Forces Apprentice course annually, less than 1% receive the Fischer Award.

Boulette now serves as a Fire Team Leader and Designated Marksman for Squad 3 of the 439th Security Forces Squadron.

Technical Sergeant Boulette’s personal awards include the Navy and Marine Corps Commendation Medal, and the Navy and Marine Corps Achievement Medal. He has also been awarded the Military Outstanding Volunteer Service Medal for prolonged volunteer work in his community. His hobbies include reading, competitive pistol and rifle shooting, lacrosse, and Brazilian Jiu Jitsu.