The North Andover Republican Town Committee held their annual Spring Fling last month and as they do each year the committee honored some of our local veterans in town. Selectmen Rosemary Smedile and Dan Lanen presided over the honors and presented each veteran with a certificate of appreciation. Here are the four heroes they honored that night.

Louis Heliotis was drafted in August 1943 following his sophomore year at Lowell High School. He was processed at Fort Devens and sent to Camp Rucker (now Fort Rucker), Alabama. Assigned to the 8th Chemical Mortar Battalion, Company B, as a member of a heavy mortar gun crew, his initial training lasted two to three months and was followed by maneuvers at Camp McClellan, Tennessee. In the spring of 1944, he and his company were loaded onto first class Pullman cars for a trip to New York City where he boarded the “Queen Elizabeth,” which had been commandeered as a troop ship, for his journey to Grenock, Scotland.

Upon arrival in the spring, Louis was transferred to Tiverton, the ‘waiting place” for the 87th Chemical Mortar Battalion. He trained and lived with British troops, attached to the 4th Infantry Division, until late spring 1944 when they were transported to the port of Southampton. He crossed the English Channel on the USS Barnette, a troop ship proceeded down rope ladders onto a landing craft to arrive on Utah Red Beach on June 6, 1944; this landing point was selected as they had heavy mortars to bring ashore with them. The Company worked their way inland amongst the hedgerows under periodic attack of the Germans, mostly artillery fire, the continued advance brought them to and over the German/Belgium border; by then, it was into the winter of 1944/45. His combat experience during this advance merited him the European African Middle Eastern Ribbon with six Service Stars and the Distinguished Unit Badge.

One night, in November/December 1944, while in the Hurtgen Forest, Louis and several of his unit were overrun by German troops and taken prisoners. Louis’ account of his prisoner of war time identified continual marching during the days and camping at night; they were properly fed. One day he was isolated into a small group and, while they were marching, were attacked and strafed by an American fighter plane. He was hit by “friendly fire” in the left leg and lower back, they were serious wounds, but not sufficient enough to make him unable to get up and about. He managed to get to a German aid station where he was treated and transported to what he described as a hospital manned by British and Scottish medics under German control. At some point in the January/February 1945 time frame, he was liberated by American forces, having been a POW for four to six weeks.

Spring 1945 found him in France, transported back to New York, on to Lake Placid, New York, and subsequently to a VA hospital in Augusta, Maine, to recuperate. He was sent home to Lowell in the spring on leave and finally discharged at Camp Edwards, Massachusetts, in October 1945. On April 28, 2006, Louis Heliotis was one of twelve American veterans who received the insignia of Chevalier in the French National; Order of the Leg/on d’honneur. This award was presented to the recipients at Norwich University, Northfield, Vermont, by Monsieur Francois Gauthier, Consul General of France in Boston, for their bravery exhibited during the 0-Day battles in Normandy at the Omaha and Utah Beaches. Following his discharge, Louis utilized the Cl Bill to become a machinist and starting in 1950, spent thirty seven years working for Raytheon at various sites in Massachusetts.

Mission/Job: Was a Cannoneer/Gunn in a M4 Sherman tank, under General Patton. During the Battle of the Bulge went into Bastone to support the 101st Airbourne who were surrounded by Nazi Forces.

Mission/Job: Attached to the casualty section of headquarters. Tracked the wounded, missing and killed in action personnel. 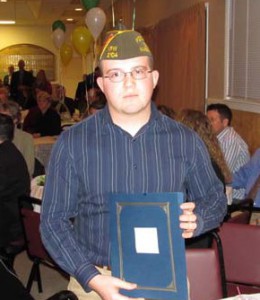 Camp Gannon Sgt. of the Guard

In charge of supervising camp security and personnel