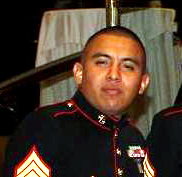 Local U.S. Marine recruiters in The Valley got their first look at the latest batch of recruits last month at Ft. Devans Army Base in Massachusetts. The new recruits, called “poolees” (recruits yet to attend basic training) were put through preliminary training to get them ready for the extensive physical demands of Marine Recruit Depot Parris Island.

Recruit poolees arrived at Ft. Devans for three days of basic training preparation where they were expected to meet a quota of sit ups, pull ups, do extensive drills, run the track and were educated to harsh marine culture during a weekend designed to prepare them for their new lives.

Recruits slept in tents at night and were given the same MRE’s (meals ready to eat) that soldiers in combat received.

The Valley Patriot was on hand during the weekend retreat and interviewed a number of high school students from The Valley. Most of which were recruited by Sgt. Cardona of the Lawrence recruiting station on Winthrop Avenue.

Cardona is a Lawrence native who enlisted in 1998 and attended Parris Island boot camp in July of 1999 after spending some time working at Prescott Nursing home in North Andover. Cardona was shipped to Afghanistan eight days after the Muslim attacks of 9-11. “We were the first ones deployed,” Cardona says.

Cardona served a tour in Iraq and Afghanistan and eventually became the Lawrence recruiter in July of 2007.

“The turnaround with these kids is amazing,” Cardona told us. “Some of these kids, when they start, have attitudes, they act like punks, they don’t really understand what life is about, the have no direction. By the time they are ready for Parris Island you see the transformation. They understand their purpose, they understand what is expected of them and that honor, courage and commitment are now going to be a way of life for them.” 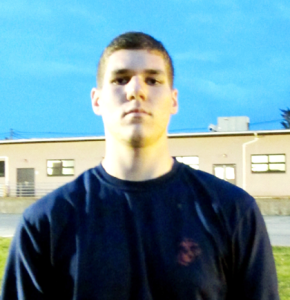 Greg Levesque of Methuen is a junior at Landmark High School in Beverly and is the son of Lawrence Police Officer David Levesque.

“Marines are the toughest of the branches,” he said. “My Father is a police officer and he was in the Army, sir, but basically, almost my whole family is in the Marines. My brother is a Marine. My cousin and my grandfather were Marines. It’s a family tradition.”

“I know what is going to be expected of me,” Levesque told The Valley Patriot “and I know what to expect from the Marines. It’s about working as a team. There are no individuals here.”

“I’m still a junior and my dad won’t sign the papers, so I have to wait till next year to be shipped out, but I’m committed 100% to see this through. I want to be a Marine and I am gong to be a Marine,” the determined teen said.

Asked about the training at Ft. Devans before being shipped to Parris Island, Levesque said he was having a great experience though he admitted, “it’s tough, it’s very tough, but it’s awesome. It gets us in shape, keeps us in shape and makes us more prepared, more motivated.”

Asked if he thought he would be ready for the extensive physical demands of basic training at Parris Island he answered without hesitation,” yes sir I’m ready now.”

Levesque echoed what many of the Marine recruits at Parris Island told The Valley Patriot last October. “I want to be a Marine, but when I get out I want to be a police officer.”

With an infinite number of possible occupations to choose from in the Marines, Levesque says he wants to join the basic infantry unit and then join the Special Forces. “I’m ready for Parris Island, and then I’ll be ready for combat. I’m ready for it.”

He said he expects to be sent somewhere in the Middle East after basic training, most likely Iraq or Afghanistan.

“Neither of my parents is looking forward to that,” he admitted nervously. “But, I made a commitment and I am going to see it through.”

Like many of the young men and women who recently joined the Marines, Levesque said he understands the dangers and the risks involved but “Marines make a difference,” he said.

“That’s what it’s all about, making a difference.” 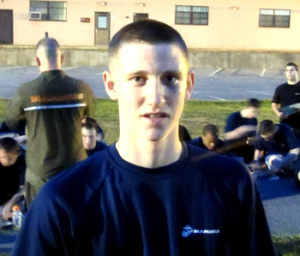 Dylan Alves is a senior at Lawrence High School and lives in Londonderry NH where he recently moved.

“I want to be a Marine, partly because I had a cousin last year who was killed in Afghanistan. His name was Eric Courier from Londonderry NH. He was a hero I want to make him proud, fill the void he left if I can. That’s not the only reason, but it was one of the big reasons,” he said.

“I’m pretty good at physical activity, I’m a small guy but it’s not a problem for me. I want go to combat overseas.”

Alves says the support he is getting at home is split, “but they know this is what I am committed to do. My dad doesn’t think I’m doing it for the right reasons but my mom supports me 100%. I understand his hesitation. It’s a big step, a life changing decision that is going to shape the entire future of my life.”

Alves runs indoor and outdoor track and a few short days after our interview with recruit Alves at Ft. Devans, one of our reporters ran into him at the Lawrence Veterans Memorial Stadium. He was volunteering to help out at the annual Special Olympics.

Alves is graduating this month and is expected to ship out to Parris Island for basic training in October of this year. 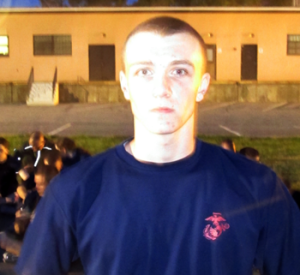 “Why do I want to be a Marine” the recruit asked out of breath after just finishing pull-ups?

“My father was a Marine, a lot of people think that is the reason but it’s not. Not really. He wasn’t there telling me to join or pushing me to do this, but it was his influence of showing me throughout my life what life in the Marines is all about. He’s out of the Marines now, but once a Marine always a Marine. I’ve never heard a Marine not say that it was the best decision they ever made and that goes for my dad too.”

“You talk to people who are in the Marines and whether they re-enlist or they go back to civilian life, they all say the same thing. ‘Look at your friends in high school and most of them will end up dead or in jail, some of them will make it but a lot of them won’t because they are going down the wrong path. They don’t know where they are going in life. They don’t have direction or purpose. The Marine Corps gives you discipline, it gives you purpose. It helps pay for your college, and gives you the skills you need, skills you will benefit from the rest of your life.”

McGrath says he wants to be a combat engineer but admits he is attracted to the idea of being a firefighter or a military police officer after basic training. He is scheduled to be shipped to Parris Island in October. 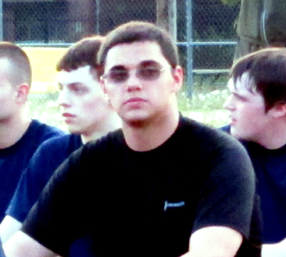 William Savard is a senior at Methuen High School who joined the Marines this year and said he is excited about being part of the military “elite.”

“My grandfather is a retired Marine,” he said. “I want to serve my country and be the best person I can be. My job is motor T I like working on cars, that’s the best part of being a Marine, you can pretty much do whatever job you want, because there are so many opportunities.”

“Not only that, being a Marine looks great on your resume when you get out. It’s a great experience, it gets me away from the streets and keeps me out of trouble. A lot of my friends are out hanging around all the time, wondering what they’re going to do with their lives, doing drugs, whatever. I’m going to be a Marine and do something with my life.”

Asked if he was ready for the reality of real combat and making life and death decisions, Savard said “yes sir, I know it’s war and I know what it means. I mean, I don’t really know because I haven’t been there but I get that it’s life and death and I know I can handle that.

Savard said he was referred to the Marines by Lance Corporal Joseph Foley who is serving in Afghanistan right now. Foley, Savard says is also from Methuen High School. 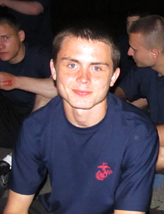 Eric Vorce is a North Andover resident and a senior at the Greater Lawrence Technical School and is scheduled to be shipped out to Parris Island on October 17th.

“I joined because my dad was in the Marine Corps it’s been my childhood dream since I was a kid. I grew up around it and fascinated by everything it’s about. It’s a culture and a way of life, and I am as ready as I am ever going to be. I can’t wait to get to Parris Island.”

Vorce says he wants to go into aviation mechanics, a lucrative career both in and out of the service.

“You can basically work for any airline when you get out,” Recruiter Sgt. Cardona said. “If he wants to go into aviation mechanics he’s picking a good MOS. (military occupational specialty). There are a lot of civilian opportunities in that field.”

Vorce continued, “I know we are at a time of war. And a lot of people are saying it’s a stupid idea, but it’s not a stupid idea to me because, we are going to go out and help people, make the world a safer place. It’s about fighting for your country and doing the right thing, working together. That is what I want to do.” 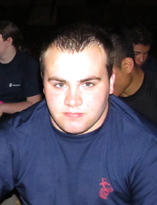 St. Louis said he thought about joining the Marines in High School but decided to try college first.

“The Marines pay for college they give you direction, when you are a Marine that really means something. It means you are the best of the best. They are the toughest, and I want to be the best. I had a pretty rough upbringing and I need the discipline, I know the Marines can help give me what I need to be successful in life.”

St Louis says that he wants to ultimately be a police officer when he leaves the service and plans on using his time in the military to get the training he needs.

“I want to be an MP (military policeman) and when I get out be a police officer. I don’t think I could do that without the training and discipline the Marines are going to give me.

St. Louis says that he understands he will be in combat situations and could lose his life in battle but admits, “that can happen here too. I want to serve my country and be part of this [the war on terror].”