By LonnieBrennan on June 8, 2011Comments Off on Votes, Taxes, Enemies and Reputations

So, what did the spring Georgetown elections and the approved $1.2 million school override cost you?

If you’re the average homeowner (half of whom sat at home and ignored the election), the vote raised your property tax to the point where either this year, next year, or the year after (depending on your property) you’ll be doling out upwards of $100 each week in taxes ($5,200/year), unless of course you live in one of the less elegant homes. But that’s nothing compared to what one well-known community figure lost at this year’s election: a piece of his reputation.

Fox 25 did a hit piece. Not an amateur job like we’re used to seeing by the likes of the Lawrence Eagle Tribune, but rather, a real smear-job, lopsided, graphic-rich hit-piece which they ‘coincidentally’ aired the night before the Georgetown elections. 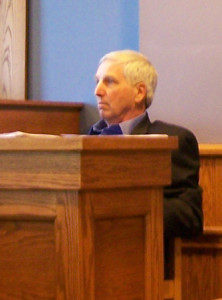 And, the funny thing about this (if you can find something funny about a hit-piece), was an e-mail sent by the former Georgetown Club owner Peter Wojtkun. In his e-mail which was obtained by the Valley Patriot, Mr. Wojtkun not only knew about the exact date and air timing of the upcoming hit-piece, but was able to nearly word-for-word summarized its contents, almost 10 days before Fox 25 went on the air.

O.K., if you’ve read this far, and if you have any memory of the former Georgetown Club and it’s disgraced former owner Mr. Wojtkun, and any memory of the various court records and judgments against Mr. Wojktun… well, as the expression goes, consider the source. One simply cannot add any more to the plethora of adjectives presented by two Massachusetts judges, in their summaries of Mr. Wojktun, his actions, and his character attributes.

So, what does the victim, Christopher Rich do to get back a piece of his reputation? In the hit-piece (for lack of a more descriptive term), Fox 25 showcased an ex-con who claimed that he hasn’t been nice (dah, no kidding) and that Mr. Rich thought the con was a gangster, and that Mr. Rich wanted to join the club so to speak (say it with gravel in your voice, to the tune of ‘a deal you can’t refuse’ ala The God Father).

The con, by the way, was doing time for check forgery. And no, not his first offense. Far from it. But, the con was a former employee of Mr. Rich’s law firm, and as he sat behind bars, looking at spending the better part of a decade sharing soap for the crimes he committed, he found a way to appeal and got out.

It gets funnier. On the purported secret ‘tape recordings’ which Mr. Rich said he would love to hear someday “if they exist”, they have printed a reference to Mr. Rich’s sister Connie: “I don’t have a sister Connie,” he explained. And there are other inconsistencies too he says. Regarding money to pay off his boat: “I don’t own a dime on my boat,” he said.

“This guy wanted to embarrass me as best as he could,” Mr. Rich said. “I was brought up by two very loving parents, and I’ve tried to conduct my life the way a good person should,” he said.

While the hit-piece certainly was the buzz election ‘morn, and of course contributed to Mr. Rich’s loss in his effort to volunteer in yet another unpaid town position (he lost by 91 votes), he said life moves on.

Mr. Rich is well known for his volunteer work on the Board of Health, the Personnel Board, and the Planning Board. Mr. Rich is also a familiar face at fundraising events for various charitable organizations, and for the schools. A few weeks after the election, I asked Mr. Rich about his now ex-con accuser and how he gets his reputation back.

“People that know me, know that that’s not me,” he replied. People that don’t know me, and I have to tell you, after watching Fox 25, I wouldn’t vote for me, without knowing me,” he chuckled. “I went to polls that day, held my head high, a tough thing to do, I was so embarrassed. I did nothing wrong. A lot of people came by and wished me well, and a lot of people went by and shook their heads.”

Regarding the checks shown on TV? “Those signatures aren’t even close to my signature,” he said. Fox 25 said that Eastern Bank said they were not forgeries. But that’s what they do in all civil suits, you deny it, and make the other side prove it. Eastern Bank settled out of court for high-five figures with me,” he said.

He’s now in the process of compiling several other cases. He can get money back, he can continue his volunteer work on various boards, but where does he go to get back that small piece of his reputation? I guess his friends and neighbors will understand, the rest really don’t matter.