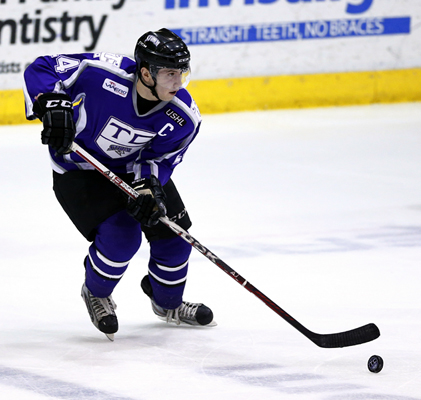 But Ward’s journey from dazzling debut to today has been a circuitous one – chockfull of 12-hour bus rides, a stint in college, three years of prep school, and the unwavering dream to play in the National Hockey League.

Ward is wrapping up the season with the Tri-City Storm of the United States Hockey League (USHL) in Kearney, Nebraska.  The 21-year-old center has spent the better part of three years with Tri-City and, as team captain, is enjoying his best season to date.  Ward currently has a 13-game point (goal or assist) streak and has registered a point in 24 of 25 games.

“I am playing pretty well and have had a good season,” said Ward, noting the Storm (22-29-7) has suffered an injury-plagued season and will not qualify for the playoffs.  “It gets easier being my third year.  I am playing with some good players and getting more playing time.”

In addition, Brian, son of Robert and Mary Ward of Haverhill, committed to attend St. Lawrence University in Canton, NY, next fall.

Ward said one of the main reasons he chose St. Lawrence – where hockey is the only Division 1 sport contested – is the opportunity to skate for Coach Greg Carvel.

“He has a very good reputation.  He showed a lot of interest in me. I knew they really wanted me,” said Ward of Carvel, who coached in the NHL. “He has a clear-cut plan of where he sees me playing.”

After that memorable opening game six years ago, Ward enjoyed a fabulous freshman campaign.  He led the Hillies in scoring, earned Merrimack Valley All-Conference honors, and was named team MVP.

Ward’s Haverhill High career, though, was short-lived as he transferred after his freshman year to Governor’s Academy in Byfield, MA.

At Governor’s, Ward blossomed and began garnering national attention, leading the team in goals and being named its MVP in 2010. 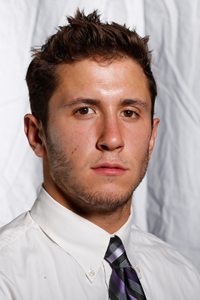 Ranked as high as No. 91 by NHL Central Scouting, Ward was not only a prolific scorer but at 6-foot-1, 195 pounds, he was also an adept player of rough-and-tumble style hockey when necessary.  In August of 2009 – before the start of his junior year – Ward committed to attend DartmouthCollege.

Before entering Dartmouth, Ward played a year for Tri-City.  It is common for Division 1 players to skate in a junior hockey league before attending college.  The Storm plays a 64-game schedule and attracts from 3,000 to 4,000 fans per game.  “Road” games are indeed on the road with Tri-City’s closest opponent being a two-hour bus trip from Kearney. Twelve-hour bus trips are not uncommon.  Off ice, Ward has lived with the same host family since arriving in Nebraska.  And on ice, the competition is top-flight.

“It’s a big step up from prep school, with the skill and the maturity of the players,” said Ward, who netted nine goals with six assists in his first year (2010-11).  “The league gets a lot of the best kids in the country.  Almost everyone playing will go to a Division 1 college.”

After one year with Tri-City, Ward appeared poised to play at Dartmouth.  But during the summer before he started classes, Ward injured his back while working.  The injury lingered into the fall, and Ward was not healthy enough to play.  When he did return, Ward practiced with the Big Green but did not participate in any games.  After one semester in Hanover, he made the difficult decision to leave Dartmouth and return to play with Tri-City.

The situation at Dartmouth was frustrating, said Ward, but he laced up his skates for the Storm, played in the final 25 games of 2011-12 and recorded 16 points.

His offensive prowess continued this season. In 39 games, Ward has piled up 22 goals and 29 assists – by far the most points he has totaled in nearly three years.

While his first foray into college hockey did not go as planned, Ward is excited about St. Lawrence.

“I fell in love with the school,” said Ward, who will enter college as a sophomore with three years of hockey eligibility. “I hope to play center. The team is losing its high scorer and is looking to replace him.”

From Haverhill High freshman to Storm captain to soon-to-be St. Lawrence sophomore, Ward’s journey has been long and arduous.  But the dream remains.