By John MacDonald on August 28, 2016Comments Off on We Must Stand With Our Police 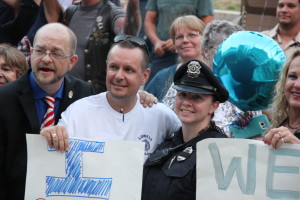 On Wednesday, July 20th I was honored that my friend, Valley Patriot publisher, Tom Duggan, asked me to speak at the Pro Police Rally at Methuen High School.

Tom had mentioned my involvement with Veterans Assisting Veterans (VAV), which is a 501 C3 nonprofit, 100% volunteer organization that helps local veterans. He also mentioned the work that VAV does to help law enforcement veterans with PTSD through a program at Ironstone Farm in Andover.

VAV is an organization I am extremely fortunate to be part of as the board of directors and honorary board of directors (which Tom Duggan is part of) is committed to being 100% volunteer, which means no one receives compensation on the board, nor do volunteers. Tom knew of my view on the world and why VAV and our mission matters to me. After speaking at Tom’s first Pro Police Rally in Lowell in 2015, Tom called and asked if I would speak again this year in Methuen.

Below is the address I delivered. As an American, and a United States Air Force Veteran, I felt compelled to leave no stone unturned in my speech. I wanted law enforcement to know how much I appreciated them, citizens to know that they needed to speak out with me and elected leaders to know how I felt about the atmosphere in our country and that things needed to change.
I was inspired to see 350 plus people show at the rally, but it wasn’t nearly enough. Please send Tom Duggan feedback and let both of us know where you stand. Here is my address. God bless you all….
***
First, I’d like to say thank you to our policing community. I’d also like to express my deepest sympathies to all the families of fallen police officers, especially those who have had to endure the recent tragic events in Dallas and Baton Rouge.

I am proud once again to stand with all of you. Here once again at a second pro police rally to show my support for our men and woman in blue. I am proud to stand with police officers and police departments throughout Massachusetts and all over the United States of America.

I never thought after the first pro police rally we held, a year and a half ago that things would be getting worse in this country, instead of better.

I never envisioned that our commander in chief would double down on his anti-police rhetoric. I never envisioned some of our federally elected leaders would continue to stand in the way of law enforcement, that they would fan the flames of division and openly support denying police access to military grade equipment.

I never envisioned that we’d see terror attacks here on the homeland increase or that our elected officials in the highest offices in the land would say to their fellow American’s “that this is the new normal”!

It’s time for all of us here… to not only stand with our police, but to stand together as patriots. No longer can we afford to have American’s quietly sitting on the sidelines hoping that things will get better. Or hoping that someone else will stand up and speak out for them. Like the ride of Paul Revere… I am calling my fellow citizens to action!

It’s time for the American Citizen to stand side by side, with the American police officer. The police that protect us from those who wish to do us harm, while risking their own lives… It’s time for you and I to be heard. It’s time to start now!

We the American people… also have to recognize that there is a segment of our own fellow citizens that need help. A segment that feels they are denied respect. We have to help people who live in poor inner city neighborhoods. We have to elect public officials that are going to roll up their sleeves, support education, help find employment and inspire those who have been left behind.
We need leaders that are going to demand that kids be taught in the classroom… on who the police are, what they stand for, the value they have to our community and how to act when you are pulled over or asked questions by the police.

We can no longer allow the false narrative to go on that the police are their enemy. The inner city communities have to know… that the police have been protecting them, are still protecting them and will continue to protect them.
Because folks… Inner city Baltimore and Chicago where people are being murdered in the streets… is just as much America as Andover or Methuen Massachusetts, where most people sleep soundly and are safe.

Resisting arrest, rioting, looting and shooting at police officers is evil. Pure and simple. Any civilized group that protests should show their anger or prove their point… peacefully!

In these times of terror… It’s the blue lives that are our first line of defense here on American streets. As Radical Islamic terrorists plan their next attacks… they must know that we stand against them and that we stand with our police officers.

George Washington once said… “The thing that separates the American Christian from every other person on earth is the fact that he would rather die on his feet, than live on his knees.”

Folks, this is a time for strength. This isn’t the time to ignore those who put political correctness over our safety and the safety of our men and woman in blue.
It’s time to speak out against the political correctness that is destroying our communities and country. It’s time to speak out against those who will tell you that it’s ok for some people to be racist and other’s not.

Here’s a message…All racism is bad… Al Sharpton. Our police lives are just as important as black lives… Mr. President!

So finally I leave you my friends with a quote from a person I have always admired. Dr. Martin Luther King, Jr.