By Tom Duggan on September 3, 2011Comments Off on What Essex County Sheriff Frank Cousins Doesn’t Want You To Know 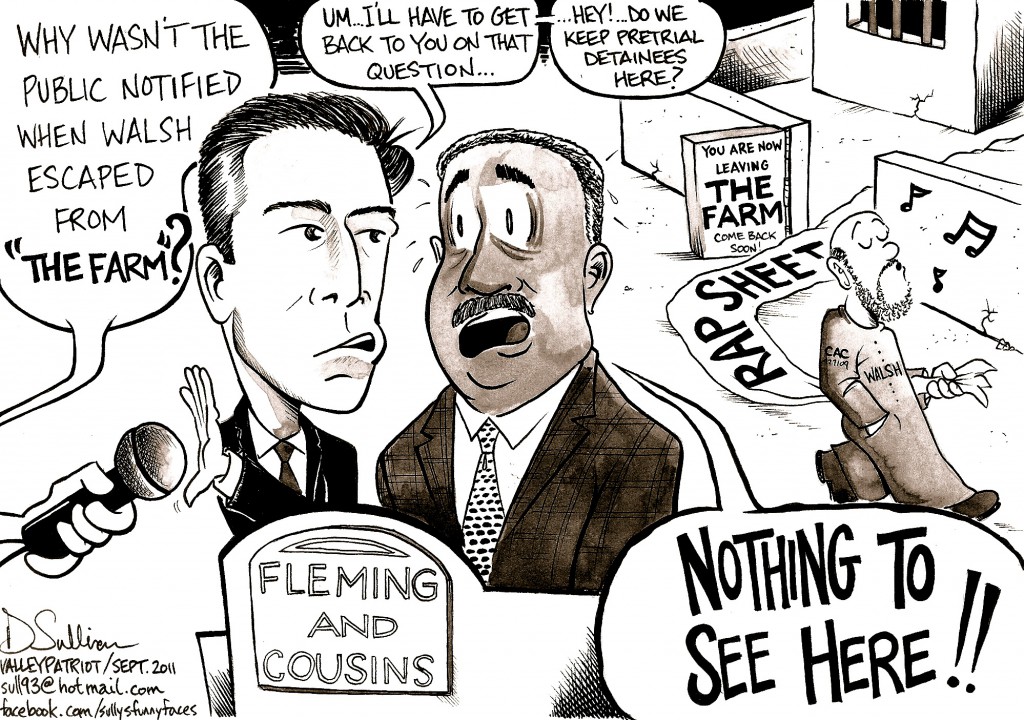 Public not being notified of escapes, pretrial detainees being held at CAC

According to documents obtained by the Valley Patriot, James Walsh is a career criminal, with 43 priors and was out on probation when he was arrested again last month on drug and assault charges.

He has a restraining order against him. He also has been arrested for forgery, counterfeiting, and uttering. He has used and sold heroin and cocaine, driven without a license, forged registry documents, and when he appeared in court to answer for his most recent crimes, Walsh was considered dangerous and a flight risk and held without bail.

That’s when Walsh was transferred to the custody of Essex County Sheriff Frank Cousins.

Cousins, in violation of state law, decided to place Walsh at the Lawrence Correctional Alternative Center (known as “the farm”) on Marston St. where he simply … walked away. This happened nearly a month ago and yet I am willing to bet that you are reading about it right here for the first time. 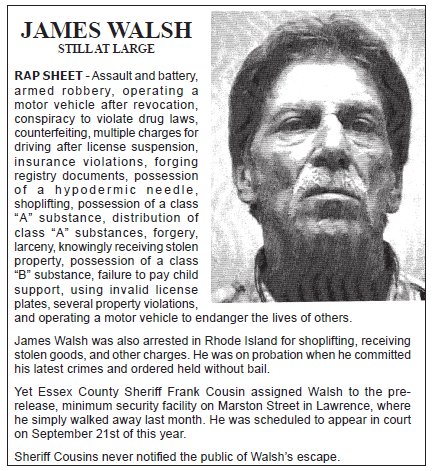 But How Can that be?

When we asked Paul Fleming last month, (Sheriff Cousins’ spokesperson) how many pre-trial detainees were being held at “the farm” (state law says prisoners awaiting trial cannot be held with convicted criminals), Fleming told us “we don’t have any”. When we pressed Fleming on the issue he insisted that “no pre-trial detainees are being held on Marston St.”

So, how is it that just a few short weeks later, James Walsh, a violent felon (and a pre-trial detainee who was too dangerous to be given bail for his latest crimes), could escape from a minimum security facility that Frank Cousins says houses “no pretrial detainees”?

And why is it that when Walsh escaped the custody of the Essex County Sheriff, Frank Cousins, the public was never notified? State Law says that whenever an inmate escapes, the public has to be told.

Not the First Time

Two months ago, The Valley Patriot wrote an editorial criticizing the Sheriff for not notifying the public when inmate Jason Brown escaped from “the Farm”. Because of the efforts of the brave men and women of the Sheriff’s Department (and local law enforcement) he was captured a few days later.

Cousins’ response, (through his spokesman, Paul Fleming) was laughable at best. He sent us a letter to the editor saying “I am writing to correct false assertions, inaccuracies and distortions made in the June editorial of your monthly publication regarding events that occurred at the Lawrence Correctional Alternative Center (CAC) on Monday, May 30, 2011”

Fleming’s excuses continued, “It is the standing policy of this office to inform members of local law enforcement and the public through the daily paper of record whenever someone walks away from the CAC. That has always been done in the past and was done in this case as well.”

What he didn’t say in his letter is that the daily paper of record is Fleming’s former employer, and that the Eagle Tribune has been a cheerleader for Cousins since the day he was elected.

Despite the fact that the Tribune has failed to alert the public of prior escapes, the Essex County Sheriff continued to notify ONLY that news outlet when another escape occurs, a news outlet with a history of not reporting on escapes.

It certainly raises the question; is there a conscious attempt by Sheriff Frank Cousins to conceal from the public how many inmates escape and the serious risk this poses to the public? Is it an effort to avoid the public embarrassment that would befall his office if people knew what was really going on?

Surely the people who live in the Prospect Hill area near “the Farm” would want to know that a man like James Walsh might be walking around their neighborhood, posing a danger to their children, looking for a place to hide or commit another felony.

Lawrence City Councilor Sandy Almonte certainly thinks so. She told the Valley Patriot that she is “very concerned” about the risks these escapes pose to her Prospect Hill district.

“The public should be notified right away when someone escapes that facility,” Almonte said. “More than that, I am a district councilor and I want to know when someone dangerous walks away over there. We want to be on the lookout for dangerous people walking around our neighborhoods potentially harming our families. This is a community, and we need to communicate. A myriad of things could happen when someone like this escapes. The charges on his (Walsh’s) record are very concerning and there is a real chance for him committing crimes in my district. We deserve to know, I’m very surprised to hear that people are not being notified and I’m even more concerned that people who are not supposed to be over there are in my district. I am putting this on the city council agenda. I think this issue needs to be addressed in public.”

A Free Pass No More

There have been several escapes from “the farm” that we know of, where the public was never informed of the dangers possibly trolling thought their neighborhoods.

Essex County Sheriff may be a nice man, and he may be thought of as the shining star in the Republican Party of Massachusetts because he is a black Republican. He may be loved by Democrats across the state and he may enjoy strong support of the local Tea Parties. He may be known as a man who donates a ton of money to local charities and helps conservative candidates running for office.

It’s obvious that Cousins is a darling of the local media and political insiders in The Valley who bend over backwards to make him look good, and sweep under the rug anything that makes him look bad.

But the fact is, because of this fawning en-mass over Sheriff Frank Cousins by both political parties, the media and the Tea Party he thinks he is above criticism and can do whatever he wants without criticism. He believes he is operating in an environment where there is no accountability when he cuts corners or routinely violates the law or his own Sheriff’s Department policies.

It’s time for those in the media and both political parties (as well as the Tea Party) to stop giving Essex County Sheriff Frank Cousins a free pass. It’s time that a light is brightly shown on the Sheriff’s Department and the public must become more aware of how his job affects the daily lives of the people who live in The Valley.

Rest assured, if the Tribune, the Republicans, the Democrats, the Tea Party, the Boston media, etc, refuses to do a little work to inform the public on the job Frank Cousins is actually doing, The Valley Patriot will be happy to do the work for them.

What Essex County Sheriff Frank Cousins Doesn’t Want You To Know added by Tom Duggan on September 3, 2011
View all posts by Tom Duggan →