By Tom Duggan on September 1, 2014Comments Off on Woman Dies in Early Morning Accident in Methuen, Boyfriend Med-Flighted to Boston with Critical Injuries 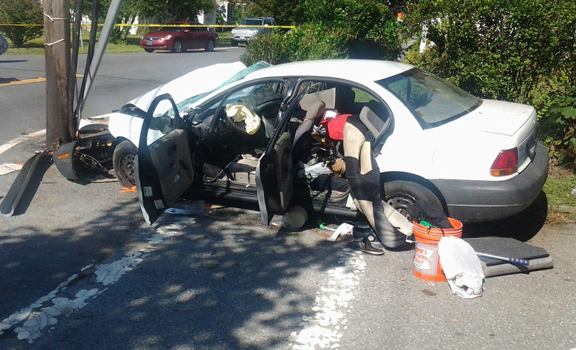 One woman is dead and one man is fighting for his life today At Beth Israel after an early morning accident on Rt. 113 in Methuen had emergency workers frantically trying to extract both occupants of a white 1999 Saturn.

“On Monday, September 1, 2014, at approximately 7:50 A.M.  Methuen Police Department responded to the intersection of North Lowell Street @ Moody Street for a report of a serious motor vehicle crash,” according to a statement by Methuen Police Captain Randy Haggar.

“Preliminary investigation indicates a white 1999 Saturn SLI, was operated by a Frank Arocho, age 39 of Lowell was travelling Eastbound on North Lowell Street,  Route 113.  As the vehicle approached Moody Street,  for an unknown reason, left the Eastbound travel lane, crossed over the westbound travel lane, proceeded onto the sidewalk, colliding with a telephone pole at the intersection of North Lowell Street at Moody Street.

Mr. Arocho was transported to the Lawrence General Hospital and then airlifted to Beth Israel Hospital with life threatening injuries.

A female passenger in the vehicle,  Ms. Kerri-Ann Roberto, age 33, of Lowell was transported to the Lawrence General Hospital where she was declared deceased by medical staff upon arrival.