By Jeff Katz on August 25, 2014Comments Off on Yesterday, Today and Tomorrow 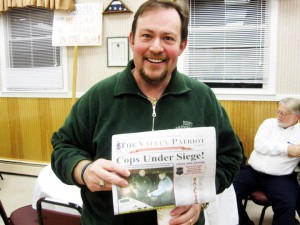 As I sit down to write this month’s column for The Valley Patriot, I’ve just enjoyed a wonderful day. Early this morning I wished my oldest son Harry a happy birthday. Today he turned thirteen and I officially became the father of a teenager. In classic over achiever style he’s actually been working on his teenage angst for the better of two years already, but I digress.

Harry and I visited with the cantor at our synagogue to discuss his upcoming Bar Mitzvah. I ran around picking up birthday items through the day and finally, after work, the entire family sat down to enjoy the birthday treats. At Casa Katz, the rules for birthdays are clear. The person celebrating the birthday chooses dinner, cake flavor and entertainment. My son’s choices included deep dish pizza and “The Avengers” as well as a chocolate cake with raspberry mousse and whipped cream frosting.

While, the day was filled with great fun and delicious tidbits, I could not help but notice what was going on outside of our home.
In Washington, DC a protest by illegal alien invaders was held in front of The White House. These criminals were demanding that they be consulted before any steps were taken to properly enforce our immigration laws. Hundreds of illegals stood outside of The White House, shouting, chanting, carrying signs and mugging for television cameras all the while bottom feeding politicians continued to tell us about how these poor folks were hiding in the shadows. Funny that ICE agents were apparently otherwise occupied and therefore unable to arrest anyone. Of course, federal agents were dispatched by this president to arrest American heroes who dared to visit a memorial to their fallen comrades last year.

In the Middle East, the region’s lone democracy continued to fight for survival. The real leader of the free world, Bibi Netanyahu leads the battle to stamp out Hamas and other Muslim terrorist groups while Barack Obama stands in The White House and proclaims that Muslims have “built the very fabric” of the United States.

Senior Obama administration officials refuse to respond to lawful subpoenas to answer for their actions. Illegal aliens, many infected with communicable diseases and already affiliated with criminal gangs, are being relocated all around the country. Our economy remains in shambles and the ranks of the unemployed and underemployed are sky high.

There’s more bad news in the world, and like many fathers I have to wonder what sort of a nation I will deliver to my kids. It will be much different than the one I got from my own Dad that much is for sure.

But at least, we got to eat cake and watch a super hero dubbed Captain America rescue the world. Perhaps there is still hope.