By Tom Duggan on April 14, 2015Comments Off on $38M Riverwalk Expansion in Lawrence, Sal Lupoli Buys Monarch on The Merrimack 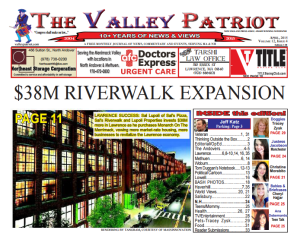 From inside his new office conference room above Coffee Cann Cafe at the massive Riverwalk complex in Lawrence, Sal Lupoli looks out over the full parking lot, marveling at the success of Riverwalk, and his recent purchase of the Wood Worsted Mill on Merrimack Street known as Monarch on the Merrimack.

The building was initially purchased from Bob Ansin who spent millions of his own money rehabilitating the old mill and turning much of the building into middle-income housing.

Lupoli told The Valley Patriot he purchased the Monarch building for $38M.

“Look out this window here,” he said pointing out at the full parking lot.

“There’s a reason there are no parking spots over here, Riverwalk has it all. Beautiful brick buildings, high ceilings, reasonable rates, and we aren’t the typical developer looking for a certain rate of return and always looking at the bottom line.”

“When I first looked at Riverwalk, Tom, I said this is a 20 year vision. People laughed. But I told them, if you want to turn around that kind of blight, you have to have patience and wait, and work hard, and constantly reinvest, and become part of the community. They laughed, but we are now going on 15 years. We started this vision in 2003, Tommy, right around the time you were starting The Valley Patriot. Lawrence is coming back and I am really happy to be a part of that.”

“The square footage of Riverwalk is in excess of three and a half million square feet. That’s just Riverwalk, not including Monarch. Less than 300,000 square feet is apartments. That’s about 7% of Riverwalk. We feel this is sustainable. We feel we have found a recipe of keeping both sides of this sustainable”

“So what is the perception of Lawrence now that all of these wonderful things have happened here in the city? It’s getting better. But, it’s important to remember that we need papers like yours to tell the story, to tell the history of what has happened here, so that people’s perceptions of Lawrence will change and with that change comes more opportunities for everybody.”

“So, I think Mayor Rivera is right, first create the jobs. It’s all about jobs. That has always been my focus. Now, look,” he said pointing to the bustle of people going in and out of the many Riverwalk buildings.

“Here at Riverwalk we have almost 4,500 people that work here and 20% of those people are now living in the Monarch. That’s pretty impressive that 20% of Monarch’s people work at Riverwalk. That goes to the point I have been making all along, the more jobs you create the more people are going to want to live here. That drives the engine of revitalizing of any community, and we are proving it right here in Lawrence.”

Lupoli said that his purchase of Monarch means additional investments and reinvestments to provide market rate housing for not only employees of Riverwalk, but for middle income professionals who want easy access to the highway, and are minutes from Lawrence’s downtown.

Then Sal recalls, his father had a heart attack and became completely disabled. His mother had to work every single day to provide for the family, “And she raised us. I never forgot that. I never forgot what it was like to sacrifice and struggle, and it helped build the work ethic I have today.”

“So when I see challenges in life, I think about the challenges my mother and father went through, and where I came from, and it motivates me. What motivates me and why I run to work every day is, I see the opportunities that exist in the City of Lawrence that have been put at the back of the bus for years. Lawrence has so much potential but it takes vision and hard work to realize that potential, otherwise we will all be sitting here 20 years from now saying, “Lawrence has potential” instead of “Lawrence is thriving”.

What about if the market or the economy changes for the worse?

“I have never been a believer in having one big tenant to occupy several hundred thousand square feet. We saw what happened with the Wang’s of the world, and the Raytheon’s of the world. You know anything can happen. So, if you have one tenant and they go under or decide to leave for whatever reason, that building goes black and the economic benefit of the community goes away overnight.”

“My vision was, why don’t we get these young entrepreneurs, young bright people who are running their own businesses, and work with them to help them grow. So, now if a small entity decides to leave the building it isn’t going to have that kind of impact as if we lost our only tenant.”

“So, with Monarch and Riverwalk, we can say Riverwalk is never going to be a housing complex, but Monarch is going to be the support mechanism, providing housing for the jobs that we create at Riverwalk.”

“The Valley Patriot has chronicled the success of Riverwalk throughout the evolution of the abandon mill complex to a full operational, full capacity business complex. You know. The Valley Patriot has catalogued with your previous stories that this didn’t just happen overnight. I didn’t just walk in and take over a booming business facility. This was empty when I bought this and it was hard work, it was a struggle. There were a lot of hard decisions that had to be made and a lot of players who had to come together at various steps in the process.”

In an interview by The Valley Patriot in 2006, Sal Lupoli said Lawrence Mayor Mike Sullivan was the catalyst for most of the renovation and revitalization at the mill complex.

“I can tell you that I wouldn’t be here investing millions of dollars in Lawrence if Mike Sullivan wasn’t the mayor of this city. That’s just a fact. Mike Sullivan has been instrumental in the success of this project. The people of this city have also been instrumental in this project. You know how many phone calls I get from the city referring business here? It’s amazing.” Lupoli said at the time. 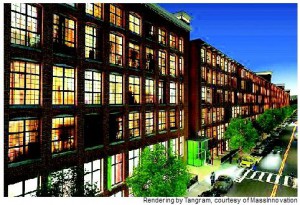 Lupoli says he has a ten year vision for Monarch to be at full capacity with a vision for not only market rate housing, but to have small businesses as well.

“Don’t forget the Monarch is one of the biggest buildings in Massachusetts. If you were to stand that building straight up it would be one of the tallest buildings in the world. It just happens to be lying down on its side. I mean think of a building that’s 1.3 million square feet. You just don’t find buildings like that. The Prudential building is only 850,000 square feet. I mean, if you take that building right there (building One at Riverwalk) and you stand it straight up it’s bigger than the Prudential building. If you take the Wood Mill and you stand it up, there isn’t a taller building in the world; it would be over 200 stories tall. And look at where we are? Lawrence, Massachusetts.”

On Monday September 8, 2014, Lupoli Companies, based in Lawrence MA, was awarded the 2014 Business of the Year by the Northeastern Economic Developers Association (NEDA).

Secretary of Housing and Economic Development of the Commonwealth of MA, Gregory Bialecki, presented the prestigious award. The NEDA Business of the Year award recognizes a company that demonstrated the highest degree of good corporate citizenship, has invested in its own area economy and has set an example for others to emulate. NEDA promotes professional economic and industrial development throughout the Northeastern United States, including Connecticut, Delaware, Maine, Massachusetts, Maryland, New Hampshire, New Jersey, New York, Pennsylvania, Rhode Island, and Vermont, as well as the District of Columbia.