By Christine Morabito on July 13, 2015Comments Off on Cape Wind Project: A Tale of Crony Environmentalism: (Part 3) Kennedys and Indians 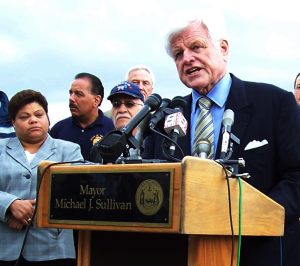 Supporters of Cape Wind desperately want you to believe that those opposed to the massive offshore industrial project are afflicted with the “not in my backyard” (NIMBY) syndrome. This conjures up images of affluent, elitist Cape Coders, who cannot bear to have their precious views spoiled by unsightly turbines. If you believed that, you could easily dismiss the otherwise legitimate public safety and environmental concerns.

It is true that members of the Kennedy clan, whose family compound is on Cape Cod, have harshly criticized the project, but for reasons far beyond NIMBY. The late Senator Edward M. (Ted) Kennedy was appalled by the way the federal government rolled out the red carpet for a wealthy private developer and ignored the rights of the people. Regulations were bypassed, policies were waived and sweetheart deals were made, leaving taxpayers to pay dearly.

Although I have not always been a fan, I am told Senator Kennedy’s constituent services were second to none. He will forever be remembered as a champion of the Cape Cod area Indian tribes, whose rights are being trampled in this unholy mess, and of the fishermen, who fear for their very livelihoods, should Cape Wind ever become a reality.

Senator Kennedy spoke on the floor of the U.S. Senate on May 9, 2006 regarding the proposed wind project. He accused the developer of “bypassing the federal process” that would apply to “all other offshore wind energy projects.” Kennedy warned, “… this project has the potential to cause havoc with the fisheries, environment, marine navigation, and aviation in Nantucket Sound ….” He added, “The project will require laying more than 100 miles of cable by plowing into the seabed, driving the bases of its 130 turbines deep into the seabed, and performing dredging in areas too shallow to currently accommodate the work boats needed for construction of the turbines. Destruction of fish habitat is unavoidable.”

Greenpeace, an unwitting supporter of the industrial project, seemingly unconcerned with the lack of data regarding its impact on marine life, launched an anti-Kennedy, pro-Cape Wind ad campaign. It seems their political agenda trumps the welfare of the whales and other marine animals they claim to represent.

Environmental lawyer Robert F. Kennedy, (Ted’s brother) wrote an op-ed in the New York Times blasting Cape Wind (“An Ill wind off Cape Cod,” December 16, 2005). “The turbines will be perilously close to the main navigation channels for cargo ships, ferries and fishing boats. The risk of collisions with the towers would increase during the fogs and storms for which the area is famous.” Appealing to Greenpeace and Massachusetts Audubon Society, Kennedy said, “The worst trap that environmentalists can fall into is the conviction that the only wilderness worth preserving is in the Rocky Mountains or Alaska. To the contrary, our most important wildernesses are those that are closest to our densest population centers, like Nantucket Sound.”

Breaking with family tradition, Congressman Joseph Kennedy III, who replaced Barney Frank in 2013, was, at that time, supportive of the wind farm. I reached out to his office for a current statement, but my message was never returned. Oh well, so much for constituent services.

Historically, politicians have spared no taxpayer expense for risky green investments. Cape Wind promises to be in good company with other green failures like Solyndra, the ill-fated solar startup that cheated taxpayers out of $535 million. It was funded with stimulus cash and given the Obama Energy Department’s blessing as a political favor, despite early warning signs that it was a bad investment. The Solyndra scandal bears a striking resemblance to Cape Wind, which has earned the nickname, “Solyndra of the sea.”

Unlike the apparent conflict of interest that motivated Massachusetts Audubon to become such a Cape Wind fan, it is refreshing to know that some core principles are immune to corruption. Two Cape area Native American tribes rejected a million dollar offer from Cape Wind Associates, LLC, and are now suing the federal government for violating their cultural and religious beliefs.

The Mashpee Wampanoag and Aquinnah Wampanoag, both federally recognized tribes, are members of the Great Nation of Wampanoag People, also known as “The People of the First Light.” An important aspect of their spiritual and religious practices is their ability to view and experience the first light on the eastern horizon. As sovereign nations with rights secured under treaties with the United States, they were stakeholders in the Cape Wind permitting process which began in 2001. As required by law, the U.S. government must consult with sovereign nations on issues affecting them. Instead, the American Indians were disregarded.

The United South and Eastern Tribes, Inc. (USET), comprised of 25 federally recognized tribes, voiced strong objection to the wind project and called on former Secretary of the Interior, Ken Salazar, to deny the permitting, stating it would be “in direct violation of the spirit and intent of the American Indian Religious Freedom Act, Executive Order 13007 – Indian Sacred Sites, the laws of Native American Graves Protection and Repatriation Act (NAGPRA), National Historic Preservation Act of 1966 (NHPA), the Archeological Resources Protection Act (ARPA) and the Archeological and Historic Preservation Act of 1974 (AHPA).”

Salazar never got around to consulting with the tribes until February 2010, just two months before he approved Cape Wind. Salazar showed up to meet the American Indians sporting a black cowboy hat. Whether his actions stemmed from blatant stupidity, or some not-so-subtle attempt to intimidate, it was in spectacularly bad taste. The culturally sensitive Salazar said of the tribes, “We hear them loud and clear,” although the majority of his time was spent mugging for the press corps cameras. It was clear the decision had already been made.

You might expect a self-identified Native American like Senator Elizabeth Warren to be supportive of Indian’s rights, but you would be wrong. Warren has been beating the Cape Wind drum for years, in her characteristically shrill manner (see also: shrieking magpie). Whether or not she is actually of American Indian descent, with her influence, the tribes might have been protected. To borrow a Warren phrase, it is clear the American Indians are “being hammered.”

For Cape Wind enthusiasts to call this a NIMBY issue is beyond insulting. Just as frustrating is the fact that even the most serious concerns — an estimated 6,600 bird deaths a year, potential oil spills, destruction of the marine ecosystem, and the risk of air and vessel collision, resulting in the possible loss of human life — are all met with the same cult-like mantra – that if we do nothing, there will be catastrophic climate change, and we are all going to die.

Are we really going to allow hysteria over a hypothetical catastrophe to replace common sense? Let’s hope not.

The above column is the third in a multi-part series. Read Part 1 and Part 2.

Comments of the Advisory Council on Historic Preservation on … Cape Wind …