By Tom Duggan on September 3, 2018Comments Off on Day of Violence in Lawrence Results in 4th Murder of the Year on Brooke Street

While most people were enjoying Labor Day with family and friends at cookouts or at the beach, police in the City of Lawrence were busy with an unusual amount of violence after a very quiet and low crime summer.

First, a man was shot on Essex Street at about 6am Monday morning.

“Officer Carlos Vieira was to the first to arrive on scene and found a 35 year old Lawrence man with an apparent gun shot wound to his back,” according to Detective Tommy Cuddy.

The man was treated on scene by member of the Lawrence Fire Department, as well as, Paramedics and EMTs from Lawrence General Hospital, and transported to that facility by ambulance.  He was subsequently transported to Boston Hospital with what are believed to be non-life threatening injuries.  He was flown to Boston with gunshot wounds and is expected to live.

Shortly after the shooting Officer Michael Coluantoni informed dispatch that he had located a gray sports utility vehicle, which was unoccupied, that had just struck a pole in the area of 700 Esssex St, coming to rest into a fence.   All responding units searched the area the suspects.  Moments later, Officers encountered two males in the area of the Merrimack Courts housing projects on Essex Street, who began to flee upon seeing the Officers.  One male was apprehended by Officer Alexander Ovalles following a short foot chase.  The second male fled on foot through backyards as several officers gave chase. He was apprehended a few blocks away hiding in a Lowell St backyard with the assistance of an Essex County Sheriff’s K-9 Unit.

A family member told the Valley Patriot that while he is in stable condition at the moment, “he is still in really bad shape, we are very worried” she said asking not to be named.

Officers located a firearm in the suspect’s vehicle.

Arrested were: Jeffrey Graciani age 35 of Lawrence was charged assault with intent to murder, assault and battery dangerous weapon, and several firearms related charges.  And Twaldo Baez age 35 of Lawrence who had active warrants for his arrest at the time of the incident. 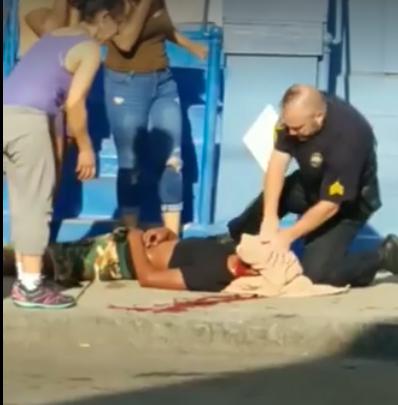 Shortly after 4pm Lawrence Police responded to a call of shots fired on Brooke Street, a heavily populated gang neighborhood in North Lawrence.

Police arriving at the scene helped EMT’s perform CPR and tried to stabilize the victim who was brought to Lawrence General Hospital and coded (No Pulse) before he could be put on a med-flight chopper for Boston.

The victim was identified as 20 year old Jaithian Amador of Lawrence. Sources say he has a three year old daughter. Law enforcement sources say Amador was a suspect in a previous shooting where nobody was killed.

While police were condoning off the Brooke Street neighborhood and interviewing witnesses on Brooke Street, another call of “shots fired” was reported at 14 Hancock Street, on the other side of North Lawrence.

Police found 9 shell casings and reported that nobody was hit. Witnesses say that the shooters were in a green Honda Civic and the shooter was one of two men sitting in the back seat. Police reported that they shot in the air and not at anyone.

Amadore is the fourth murder victim in Lawrence in 2018. Last year at this time there were already nine murders in Lawrence.

FOUR MURDERS in 2018 ONLY ONE SUSPECT CAUGHT

The first murder was on 550 Broadway on May 2nd when a man was executed while sitting in his car in the parking lot of an apartment building. No suspect has been arrested in that murder despite an extensive search of the area.

The second murder in Lawrence this year was a stabbing death on Doyle Street that turned out to be a domestic gone wrong when a boyfriend stabbed his girlfriend to death. He was still at the scene when police arrived and was charged with her murder.

The third murder in Lawrence was on Hampshire Street on May 7th, when a man was executed with seven shots in the back in broad daylight by a man who was laying in wait as he exited a bodega at the corner of Alder and Hampshire.

Police have not made an arrest in that murder either, despite having video and photos of the actual shooting and getaway car. The victim had several ID’s on him and his fingerprints came back to another person’s identity.

Despite the four murders in Lawrence and the uptick in violence towards the end of the summer, Lawrence has seen a more than 50% decrease in violent crimes in 2018.

Day of Violence in Lawrence Results in 4th Murder of the Year on Brooke Street added by Tom Duggan on September 3, 2018
View all posts by Tom Duggan →